Zen and the Art of Winning Leadville – Elevation Outdoors Magazine 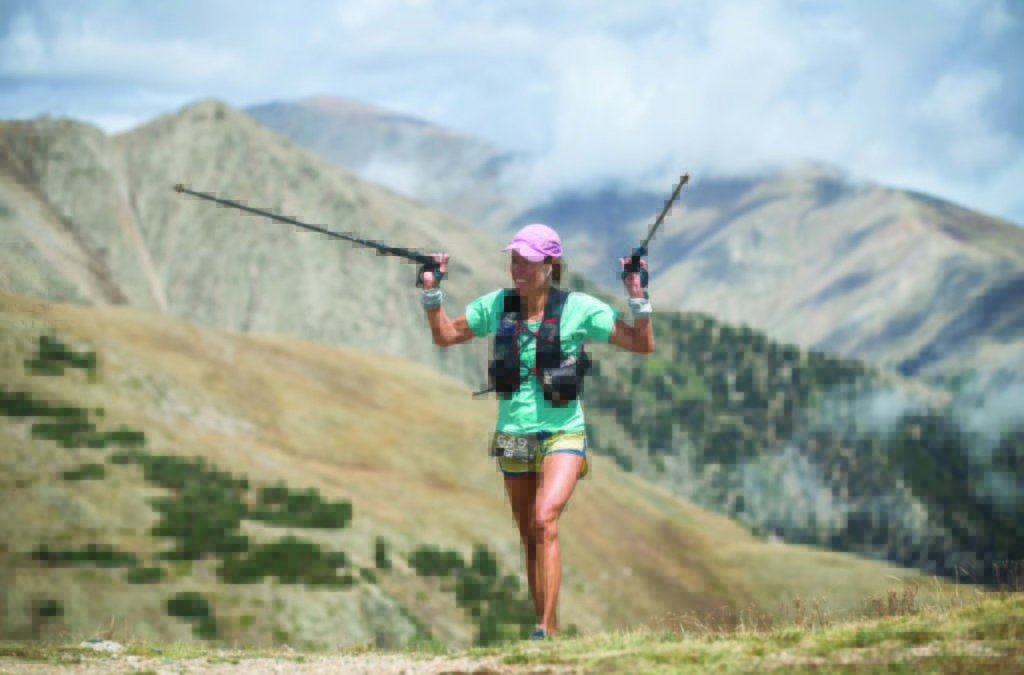 Two years after breaking her leg and a doctor telling her she had to quit running, this Zen athlete took first place in one of the hardest endurance races on the planet. All it took was a little bit of Whitesnake and an understanding that winning is nothing more than the river beneath your feet.

The day before the start of the Leadville Trail 100 Run, I was walking down the mining town’s main drag when I passed a dilapidated white Victorian. It had peeling gingerbread trim and two sun-faded whitewater kayaks beached on the front-porch railing. The front door looked fused shut, as if it hadn’t been opened in years. Painted above a window was a sign that read “Cosmology Energy Museum.” And above that “Divine Spirit Over Matter.”

I stopped in my tracks. In less than 24 hours, I’d toe the line of my first 100-mile race. I had no idea what lay ahead, but I understood that in order to make it through the mountains to the finish, I’d need more than physical stamina and sheer willpower. I’d need heart and humility, a little bit of luck and a lot of grace. I’d need divine spirit over matter.

Two years earlier, I’d broken my left leg in a whitewater rafting accident. My orthopedist had advised me never to run again. “Find a new hobby,” he said dismissively. He put in a piece of metal the shape of a baking spatula just below my knee that you could see through my skin. I was 46 years old. The farthest I’d ever run before was 62 miles. I didn’t have a coach or a training plan.  All I had were the Sangre de Cristo Mountains out my back door and a copy of the book Zen Mind, Beginner’s Mind, written in 1971 by the Japanese Zen master Shunryu Suzuki Roshi. My friend, the well-known Zen writer Natalie Goldberg, had given it to me—with a caveat. “It’s a classic,” she told me, “but you might not understand it.” Buddhism, by definition, is beyond definition, sometimes even explanation.

The minute I started reading, though, I understood everything. Not with my brain, but in my body. I understood Zen Mind because I understood running. Suzuki Roshi was writing about sitting, but I realized that if I replaced “sitting” with running, he and I were speaking the same language. After all, the tenets of Zen—form, repetition, stamina and suffering—aren’t so different from the principles of ultra running. If I could apply his teachings to my running, maybe I could train my mind and spirit to be as strong as my body. Maybe even stronger.

I had no idea how to do this, of course. I’d been a runner my whole life, but I was a rookie when it came to Buddhism. It was refreshing to be so clueless. “If your mind is empty,” Suzuki Roshi writes, “it is already ready for anything; it is open to everything. In the beginner’s mind there are many possibilities. In the expert’s mind, there are few.” There was so much about running 100 miles I didn’t know: Could I tolerate the distance and impact? Did I still have the drive to run so far? I’d run and won races at every distance from 5K to 100K; I’d set course records. But now I was a beginner all over again.

After all, the tenets of Zen—form, repetition, stamina and suffering—aren’t so different from the principles of ultra running. If I could apply his teachings to my running, maybe I could train my mind and spirit to be as strong as my body. Maybe even stronger.

My Leadville training was unconventional. I didn’t tabulate my weekly mileage or worry about speed work. I focused just as much on sitting still as on running fast. Most mornings before I left for the trails, I tried to meditate outside in our garden. I didn’t have much stamina—the most I could manage before getting antsy was five to eight minutes, or if I was feeling really motivated, 10. I almost always read a few pages of Zen Mind first, hoping the teaching would soak into my subconscious as I sat and become part of my muscle memory as I ran.

One of the central ideas in Zen Mind is to sit without trying to achieve results, without what Suzuki Roshi calls “gaining idea.” This one was harder to practice. I’m a competitive runner and competitive athletes by nature have a gaining idea: to win. I run because I love to move through the mountains on my own two feet, to feel free and alive and to feel stories move through me as I run. But winning is addictive. It feeds the ego. I’d have to re-learn how to run without trying to win, for the pure joy of it.

In June, I went to Leadville for a three-day training camp. The first day on the trail, I was in a hurry. I kept looking at my watch, trying to figure out how many miles I’d run and how many still remained. I was running out in front of myself, not in my body but ahead of my restless mind, and the 26 miles felt more like 50.

The second day, I vowed to let go of time and try to let the mountains carry me up and over 12,600-foot Hope Pass twice. I felt light and free, exhilaratingly happy, completely present. Later, at the finish, a man with a handlebar mustache whom I’d passed on the climb, came over to me and asked incredulously, “Where’s your motor?”

Without thinking, I answered, “In the river beneath my feet.” He looked at me strangely, and smiled, the sort of half-hearted, quizzical smile you give someone when you have no idea what they’re talking about.

But I knew what I meant in my body, if not my brain. That the mountains, like water, have a flow, an energy; they are older and wiser and they can carry me, just as rivers have always carried me, even on the day I broke my leg. There is a current, and you can fight it or you can go with it and ride it. The 13th-century Zen master Dogen explained it as being in time. This was how I wanted to run the Leadville 100. I knew if I pushed against time or tried to race it, I would create more resistance and suffering for myself. But if I could tap into the way it naturally flows, and ride that current, then it would carry me along and do some of the hard work for me.

Six weeks later, I drove back to Leadville for the race. As I came into town, I was so overcome by the 14,000-foot peaks that I had to pull over on the side of the road, suffused with gratitude just to be there at the start of a 100-mile race—healthy, after everything I’d been through. I felt then that whatever happened, good, bad or ugly, finish or drop, would be icing on the cake. Leadville would be a celebration of the journey I’d traveled to get there. I was open to whatever the race would teach me.

At 3 a.m. before the start, I woke in the dark and wolfed down two bowls of instant oatmeal and wrote two words in black Sharpie on the back of my hand: smile and flow. I wanted to move with the mountains the way I had in June, and to remember the joy that I’d always felt when I ran, that was the reason why I ran.

I can tell you what happened next. The gun went off, and I ran into the still-black night with nearly 800 other people, determined not to go out too fast. In front of me, in the first light of morning, a male runner with a John Denver bob and a fanny pack screamed Lead-FUCKING-ville! and I screamed it back, spontaneous rallying cry and war whoop and pure glee all rolled into one. It rained and the sun came out. I ate GU and drank Coke and sang Men at Work songs with my husband, Steve, as he paced me over Hope Pass. I caught up with the first-place woman and passed her. I saw the most gorgeous enormous llamas and my daughters wearing whoopie cushion costumes and complete strangers cheering my name and old friends I’d known for years and others I’d just met but felt like I’d known forever. I ran through a river in wet sneakers and cranked White Snake’s “Here I Go Again” in my ear buds and watched the sun set. And the more I smiled, the more I flowed, and the more I flowed, the more I smiled—a perfect feedback loop.

None of this, though, accounts for what really happened.

Flow with the river of time, I told myself as I ran. And I did, for 100 miles and nearly 20 hours. It was almost midnight and drizzling as I approached the finish line, but with 50 yards to go, the clouds drifted apart and a shooting star streaked through the opening, a brief white flashing in the black night—a kind of magic, here and then gone.

It was almost midnight and drizzling as I approached the finish line, but with 50 yards to go, the clouds drifted apart and a shooting star streaked through the opening, a brief white flashing in the black night—a kind of magic, here and then gone.

In Zen there’s an idea called “no gap,” in which there’s no longer any distinction between who you think you are and who you are, between you and all the different parts of yourself, between you and the world. “When this happens, all of life gets behind you,” Natalie once told me,  “the trees and the dirt and the mountains and people. Everything.”

All the parts of my life—writing and mothering, running and Zen—had converged in Leadville. I’d tapped into something bigger than myself and had ridden it to an outcome I never could have imagined. Like Zen, it defied explanation, replication. You couldn’t understand it with your brain. You had to touch it with another part of your consciousness.

As I broke the tape, I felt as though I’d been floating all day and that I could just keep going and going—like time itself. For a little while at least, I’d closed the gap. It wasn’t beginner’s luck that had helped me win Leadville. It was beginner’s mind.

Katie Arnold is a contributing editor at Outside and the author of Running Home: A Memoir, published this month by Random House. The 2018 Leadville 100 women’s champion, she lives in Santa Fe, New Mexico, with her husband and two daughters.