You’ve seen those massive jets fighting Colorado’s wildfires. Meet the pilots who get “down and dirty” flying them. 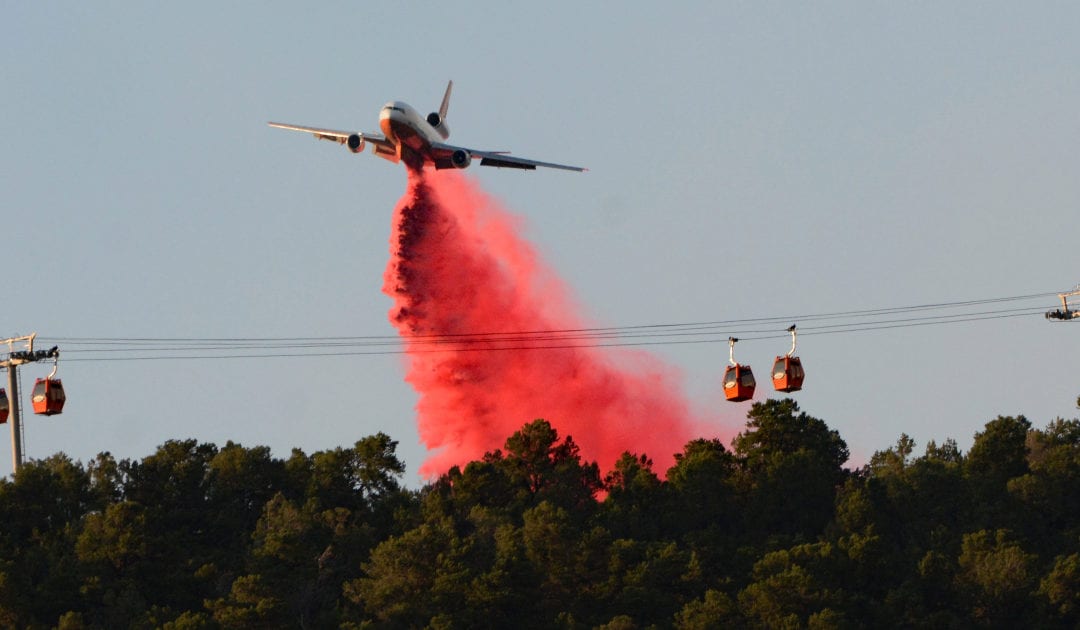 It’s smoky. The massive jet with a 155-foot wingspan is barreling 300-feet off the deck. The trees that are 150-feet tall feel like they are tickling the plane’s belly. The flames can be taller than those trees. His three engines are screaming as his wings dip below the canyon walls. As his flight engineer releases up to 10,000 gallons of fire retardant on the flames below, the plane wants to climb. Montelli has to jam down on the yoke, a counterintuitive move for a pilot captaining a jetliner a few hundred feet above craggy, flaming mountain terrain.

“It’s unreal and eye-opening for someone who is new to this,” says Montelli, a former military pilot who captains DC-10s for 10 Tanker Air Carrier, the New Mexico-based operation with two of its massive air tankers working Colorado fires from the Colorado Springs Airport.

The mundanely-named Very Large Air Tankers, like 10 Tankers’ DC-10s, are changing the game for modern wildland firefighting. With bellies spewing fire-snuffing retardant, the airliners prowling Colorado’s skies are helping ground crews battling the Pine Gulch, Grizzly Creek and Cameron Peak fires. The planes that once carried as many as 380 passengers are the newest tool in a growing arsenal of aerial strategies deployed by federal firefighters trying to beat back wildfires that are exploding after a particularly parched summer in a warming, arid climate.

10 Tanker Air Carrier started in 2006 and now has four DC-10s that work with the U.S. Forest Service fighting wildfires. Since 2007, the company has received $102.7 million in federal firefighting contracts, including a 10-year, $70 million contract for on-call fire suppression services awarded in 2013 by the Forest Service’s National Interagency Fire Center. In the winter, the Albuquerque-based company sends its tankers to fires in Chile and Australia.

The company’s DC-10 air tankers’ 10,000-gallon capacity translates to about 94,000 pounds of retardant split between three tanks in the belly of the aircraft. With three jet engines, the DC-10 has a “humongous power-to-freight ratio,” says Rob Burrus, 10 Tanker’s head of operations.

“Every time we drop a single load, it’s like three loads by a Large Air Tanker,” Burrus says.

And those big loads are essential right now in Colorado. More than 2,400 firefighters were in Colorado Wednesday fighting the four largest fires burning in the state.

The 10 Tankers DC-10s are the only Very Large Air Tankers working in the Forest Service’s Rocky Mountain Region right now and they have dumped retardant on the Pine Gulch, Grizzly Creek and Cameron Peak fires. (The federal government defines VLATs as capable of carrying 8,000 gallons or more, while Type 1 Large Air Tankers — like military C-130s — carry 3,000 to 4,999 gallons.)

The region has five Large Air Tankers, 12 single-engine air tankers and 34 helicopters available for firefighting. All in, the region counts 2,505 resources — aircraft, equipment and people — supporting firefighting in the Rocky Mountain Region this week.

On Tuesday, aircraft dumped 81,000 gallons of fire retardant on the Pine Gulch Fire and three smaller fires in Colorado and Wyoming.

The massive air program is helping the Forest Service in an aggressive initial attack that is part of its effort to limit the need for multiple large camps of firefighters during the pandemic.

“The goal is fast containment using all the tools we have in the toolbox, which include aviation resources and boots on the ground,” says Lawrence Lujan with the Forest Service’s Rocky Mountain Region. “Together the air tankers that are dropping fire retardant reduce the spread of the wildfire and at times make it safer for our crews to engage on the ground if they are not on steep rugged terrain.”

Montelli and his 10 Tanker crews are operating out of a temporary fire retardant refilling base at the Colorado Springs Airport. But it won’t be temporary for long. The Forest Service and City of Colorado Springs are building a 1.5-acre permanent base for filling air tankers. It will be the largest base in the region and able to serve all sizes of air tankers working fires within a 600-mile radius in Colorado, Wyoming, South Dakota, Kansas and Nebraska. The new base represents a quarter of the $37.2 million budget authorized by 2018 federal legislation funding the Forest Service’s Aviation Safety and Modernization Strategy.

“The permanent base will make sure our response is efficient and as effective as possible,” Lujan says.

Aerial firefighting evolved in the 1990s from crop-dusting technology. Today’s most advanced air tankers use computer-controlled hydraulic valves and doors to control the release of fire retardant when flying over wildfires. Those systems account for the forces of gravity when planes are maneuvering to make sure every drop of retardant is placed precisely where it’s needed.

“Our job in this whole thing is we are in support of the guys on the ground,” Burrus says. “We do indirect attacks on the fire, so we are slowing down the fire so they are able to put in a dozer line or a pick line.”

Burrus’s 10 Tanker pilots and engineers come from airlines or the military. Burrus has a paramilitary background with extensive experience with a variety of military aircraft.

The appeal of the DC-10s is they can base somewhere in the West, like Colorado Springs, and respond to fires in several states. And they can travel much faster than other air tankers — up to 350 mph fully loaded.

“It’s not like the old days when you needed regional attack plans to get to a fire,” Burrus said.

For Montelli, his co-pilot and flight engineer, a typical day in the office blends the work of piloting and firefighting. Like normal pilots, they show up early at the Colorado Springs Airport and get their plane loaded with fuel and retardant. Then, like firefighters, they wait.

When the call comes, they get a piece of paper with the name of a fire, its latitude and longitude and radio frequencies they need to dial up to reach the pilot of a lead plane who will guide them over the fire. The team charts a course to the fire and takes flight.

When they get close, they radio the pilot of the twin-engine Beechcraft King Air lead plane. That pilot explains what the firefighters need and where they want retardant. Then that pilot flies a dry run to show Montelli the flight path for the drop. Then that pilot circles back and Montelli follows the Beechcraft into the drop zone.

Above Colorado’s hard-to-fight canyon fires, Montelli noses his jet into a narrow canyon, trying to keep about 300 feet above the ground.

Montelli is the captain, so he’s watching where to drop as well as flying the tanker. There aren’t any computer controls at work. His co-pilot is watching the altimeter. Any lower than 300 feet and the deluge of heavy retardant can flatten trees and potentially injure firefighters on the ground. A flight engineer is manning the computerized doors that control the amount of retardant that pours from the plane’s belly.

The idea is to control the flow so it “falls like hard rain,” says Montelli, who tells the engineer when to open the doors based on the specifics provided by the lead plane pilot.

This is where things get “sporty,” says Montelli, describing a surreal scene of smoke, fire and canyon visible from the cockpit of his low-flying, cumbersome air tanker.

For a grassfire in flat Texas, Montelli releases two, three or four gallons of retardant to cover a 10-foot by 10-foot square. That’s Level 2 to Level 4 coverage. In Colorado’s rocky canyons like the ones getting scorched in the Grizzly Creek Fire, he’s releasing twice that, Level 6 to Level 8. That’s up to eight gallons of retardant blanketing every 100 square feet. He can release all 10,000 gallons of retardant in 10 seconds if that’s what ground crews want. But typically he’s controlling the flow and covering different areas with two to four drops. He’s done four drops to box in a fire and he’s done single drops to bury flames. It all depends on what the firefighters need.

“I can split it up however they want,” Montelli says.

And as that 94,000-pound payload showers the flames, the jetliner floats upward and the flying gets even more physical, with Montelli muscling that yoke.

“It’s exhilarating and it’s not like you are doing normal flying,” he says. “Sure, we do the take-offs and landings just like any other crew, but we are getting down and dirty every time we get over a fire. I tell you there is no job like it.”