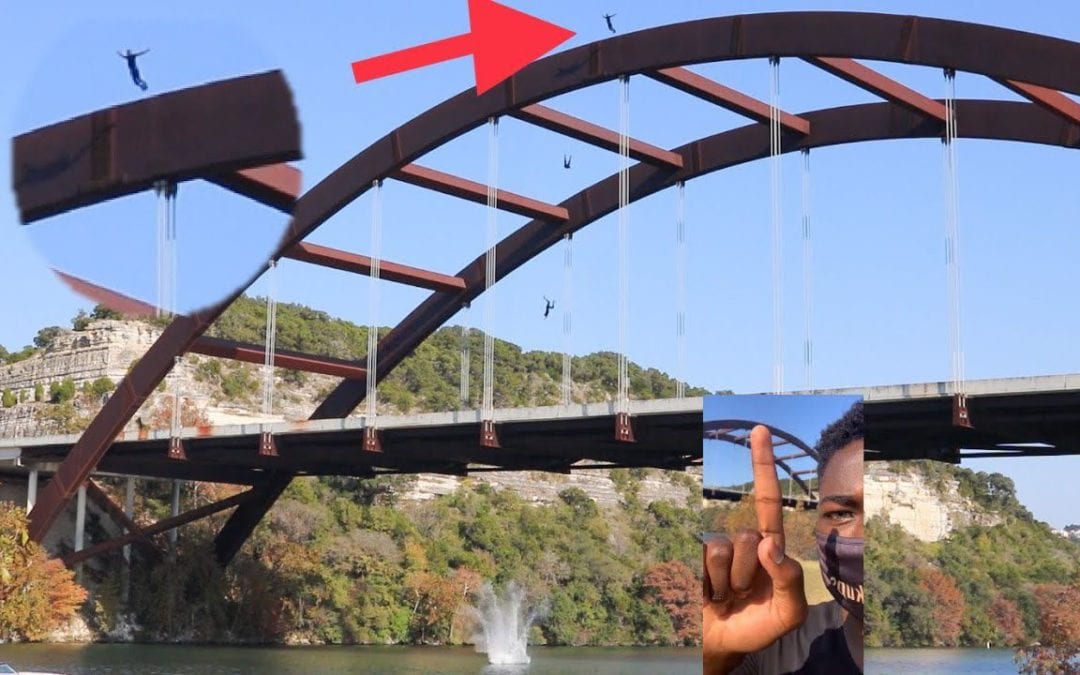 A ‘not so bright’ Youtuber (Saa Fomba) created a now viral video showing him jumping from the top of the arch of the Pennybacker bridge into the Colorado River below.

It didn’t go as planned.

The video depicts a man ascending the arch of the bridge on the North Capital of Texas Highway before finally reaching the top, throwing a fist into the air, and jumping into the water.

Once slamming into the water, a boat rescued the young man and brought him to shore.

CBS Austin confirmed with Austin-Travis County EMS that on Monday, November 23rd, medics responded to an “unknown” call at Plaza on the Lake at 2:34p.m, following the jump.

When help arrived, Fomba was lying on the ground, holding his head.

Fomba posted a follow up video to his Youtube channel, where he appears to be quite ‘out of it’ and states that he cracked his skull.

However, he claims he jumped not only for views, but to chase a dream and leave a mark.

The caption in the video posted by Fomba states “You might see it as jumping for views , but I see more. I wasn’t built for just normal, I’m a dream chaser, I don’t settle for less, I will leave my mark on this planet we call earth our home. chase yours and leave your mark.”

Regarding the experience, Fomba simply replied “People have asked me if the jump was worth it. I respond it’s always worth it if it involves chasing my dreams.”

In a video posted Sunday, Fomba tried to clarify the motivation and message behind his actions, stating “I did not mean go and jump off a f** bridge. I have a big f** ego, and I know what I’m capable of. Hopefully, there’s been a motivation, not by me jumping off of a bridge to show off and say go do the same, but you find something within you that motivates you to go chase after your own dreams. And that’s that.”

The post Youtuber Jumps From The Top Of A Super Tall Bridge Into Colorado River – Breaks Skull appeared first on AwesomeJelly.com.