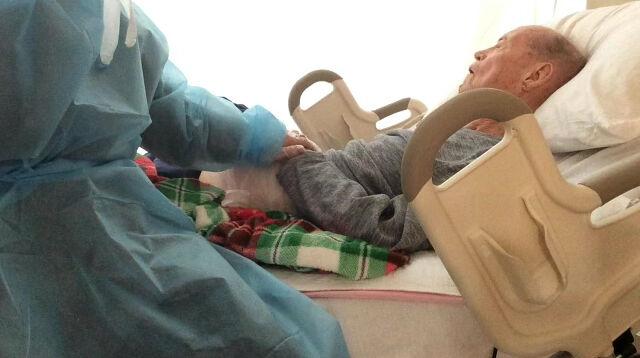 Sue Ok Dailey isn’t a nurse or a doctor, but every day for the past week, she’s been suiting up in a face mask, face shield, hair net and blue gown before she enters the doors of a Colorado Springs nursing home, where the coronavirus has taken more than 20 lives.

She has no medical background and she’s deathly afraid of the virus, her son Tim Dailey said, but that hasn’t stopped her from trying to nurse her husband of nearly 50 years back to good health after the virus has left him bedridden, unable to speak and down to 110 pounds.

Springs Village Care Center, where John Dailey has been living for the past two years, called Sue on Christmas Day to give her permission to visit her husband, in the hopes that she could coax him to eat and bring him comfort, Tim said.

That day, she left the hospital where she was waiting to see her newborn grandson in Phoenix and got on a plane to Colorado.

“Once the nursing home said they would let my mom come in and help take care of my dad, it was never an option not to do that,” Tim said. Family in Korean culture “is everything,” he added.

John Dailey, who has vascular dementia, has lived in the nursing home for about two years, his son said. Before contracting the virus, he was “fairly lucid”, could recognize his family and could sit in a wheelchair, Tim said. His parents would visit each other almost every day outside, sitting across from each other at a table.

But as the virus spread, residents were confined to their rooms and all visitation was put to a halt. After testing positive for the virus in early December, his father’s condition rapidly declined, Tim said, adding that his father has lost 20 pounds in the last month and can no longer sit up.

John and his family continued to talk over FaceTime, but days before Christmas, the nursing home staff called to say that he was in bad shape. He had stopped eating.

So when Sue got permission to visit her husband in person, she didn’t hesitate, Tim said. Since Christmas, Sue, who is in her 60s and among those at high risk of contracting the virus, has been at the nursing home to feed her husband lunch and dinner, he said.

“It struck me as extraordinary for someone who’s not a medical professional to go into a COVID-infested facility each day to help care for a loved one,” Tim said of his mom, whose company appears to be helping.

“Yesterday is the first time I have heard him say anything in about three or four days,” said Tim, who talks to his dad through FaceTime or Google Hangouts. “He said ‘hi’ to me.”

And though through a screen and many miles away, John got to see his newest grandson, who was born on Christmas Day.

Tim, who now lives in Phoenix where restaurants and bars face little restriction, said he felt few knew about the grim reality inside nursing homes during the pandemic.

“Outside of our family, nobody knows about this. It kind of felt like how I felt after I came back from Iraq,” he said. “It’s like, ‘Do you have any idea of what’s going on over there?’ And everyone is just walking through the streets like nothing is happening.”

The virus has swept through nursing home and long-term care facilities in Colorado Springs and across the state, causing thousands of outbreaks among elderly and at-risk residents.

According to Colorado Public Health Department and Environment’s website, 85 residents and 66 staff members at Springs Village Care Center have tested positive for the virus since it was first detected in mid-November.

“The way people are living their lives, those that are unaffected, seems incongruent with reality in the nursing homes,” Tim said.