Wolves Are Coming Back to Colorado. Now Comes the Tricky Part. 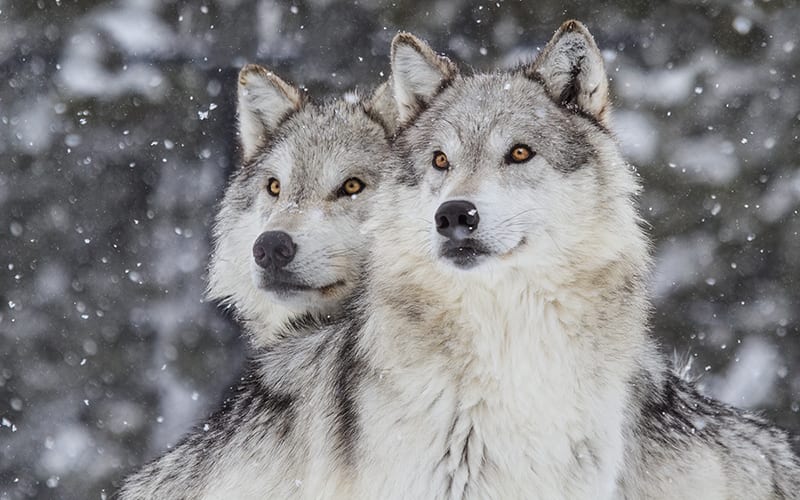 The last wild wolf in Colorado was shot in 1945. Seventy-five years later, the animals are coming back to a different state. One that wants them—but just barely.

Ballot initiative 114, which put the question of wolf reintroduction to voters for the first time in US history, was the closest race in Colorado’s November election. The measure passed by 56,000 votes, giving Colorado Parks and Wildlife a mandate to create a plan for gray wolf reintroduction by the end of 2023. Wolf reintroductions in Montana, Idaho, and Wyoming have been contentious, mired by lawsuits and fluctuating hunting laws that have deemed wolves shoot-on-sight vermin in some places. Wildlife advocates hope that majority support in Colorado for wolves heralds a smoother reacquaintance, and they believe that engaging with ranchers and hunters concerned about the predator will reduce friction when wolves arrive on the Western Slope. If the reintroduction proves successful, the state could be a model for voter guided wildlife initiatives across the country.

In 1945, just over 1 million people lived in Colorado. In 2020, that number is nearly 6 million. An outdoor industry report found that 71 percent of Coloradans like to get outside, and the state draws millions more visitors to hike and ski in the towering Rocky Mountains. All of which means that wolves will have less space to roam without human interference, compared to the northern Rockies states.

Colorado Parks and Wildlife public information officer Rebecca Ferrell says that Colorado has a host of examples to draw on for reintroduction plans but is ultimately trying to do something new. “We’ll listen to and take guidance from other states, with the knowledge that Colorado isn’t an Idaho or a Yellowstone,” Ferrell said. “I don’t know if we really have a great comparison, to be honest.”

Jonathan Proctor, Rockies and Plains program director for Defenders of Wildlife, says the ecosystems of the Rockies all evolved in the presence of wolves. He believes that the similarities between the ecosystems will be a bigger factor in the success of wolves than the differences in human settlement. He points out that wolves live in Italy and are doing fine there, even though the country’s human population density is more than 10 times higher than Colorado’s.

Proctor says returning wolves to Colorado will help restore a predator-prey balance that the ecosystems of the southern Rocky Mountains have not known in a century. By changing elk behavior, wolves can reduce overgrazing on river banks, which in turn can make areas more suitable for songbirds and beavers. Beavers, in turn, improve habitat for native fish and amphibians. By reducing coyote populations, wolves have the potential to increase the numbers of foxes and ground squirrels, which increase available food for birds of prey.

Now that the ballot measure has passed, Colorado Parks and Wildlife faces the challenge of developing a plan that balances biological needs and human interests.

While just over half of voters statewide supported wolf reintroduction, the measure crossed the victory threshold due to strong support in Denver, Boulder, and Fort Collins on Colorado’s Front Range, far from where the wolves will actually be. While many people on the Western Slope will be happy to see wolves restored, some ranchers feel like voters have thrown them under the bus.

Marj Perry is a third-generation rancher who raises cattle just outside Carbondale. Along with her husband, Bill Fales, she has worked to protect ranches around the state from development and keep oil and gas development away from the Roaring Fork Valley. She considers herself a conservationist but says she’s having trouble seeing eye-to-eye with groups like the Sierra Club and Defenders of Wildlife on this issue. First and foremost, she’s worried about her cows.

“I think it will be devastating,” Perry said. “The statistics you always see are, ‘You only have 1 percent death loss.’ But that’s compared to the whole state. In the areas you actually have wolves, it’s much higher. And it’s very hard to take.”

In Yellowstone, wolves famously initiated a trophic cascade that eventually changed the course of rivers by influencing the movement patterns of elk and preventing overgrazing of riparian areas. But Perry says there is no evidence of a similar riparian over-grazing problem on the Western Slope. The most similar area in the state, from her research, is Rocky Mountain National Park. Lying mostly east of the continental divide, it is not a candidate for wolf reintroduction.

“They haven’t shown any evidence that our riparian areas are harmed. I just want to see the science,” Perry said.

Perry says she values healthy ecosystems, but wonders if different measures, like reintroducing beavers, could achieve the same goals without threatening rancher’s livelihoods. She feels that wolves exert a romantic pull on voters, but that doesn’t mean Colorado is the right place for them.

Beyond direct kills, Perry fears her cows will be nervous and won’t gain weight if wolves are around. She’s also concerned that dealing with the wolves will be yet another to-do item when ranchers are already stretched thin. Perry says confirming wolf kills will be a time-intensive process that will likely involve riding back into cellphone service from their 50,000 acre range, calling a wildlife biologist, then riding back out to the kill site. Perry and Fales say they don’t find every cow that dies, which would further complicate the issue.

Now that the measure has passed, Perry and Fales hope that state compensation for wolf kills will last as long as the wolves do.

Proctor, who used to run the rancher compensation program for confirmed wolf-related losses in Montana, says the state would do well to move forward in the planning process with input from all parties, including those who opposed reintroduction. Now that the wolves are coming, it’s in everyone’s best interest to reduce potential conflicts wherever possible.

“Very few ranchers will ever have a direct loss, but for those who do, we don’t want to downplay that,” Proctor said. “There could be a few ranchers who have multiple impacts. It seems that some ranches are in a location with movement patterns of elk and wolves that make them more susceptible.”

Proctor says Defenders of Wildlife has already held workshops on ranching with predators, bringing in ranchers from areas where wolves have already been reintroduced to share tips on how to keep losses to a minimum. As the planning process begins, Ferrell says all stakeholder groups will be at the table. Everyone agrees on at least one thing: There’s no going back to the Colorado the last wolf lived in.

“You can’t re-create the Garden of Eden,” Fales said.

Proctor agrees. Rather than returning the state to some idealized past, he hopes the wolf reintroduction will move Colorado toward a healthier, more stable future. If it’s successful, Proctor thinks Colorado can be a model for other states, showing that when citizens vote in favor of biodiversity, states can work harder to support ecosystems.

“There is still hope toward reversing the trend of losing species and habitat,” Proctor said. “It’s more than just wolves; it’s about the health and biodiversity of this planet.”