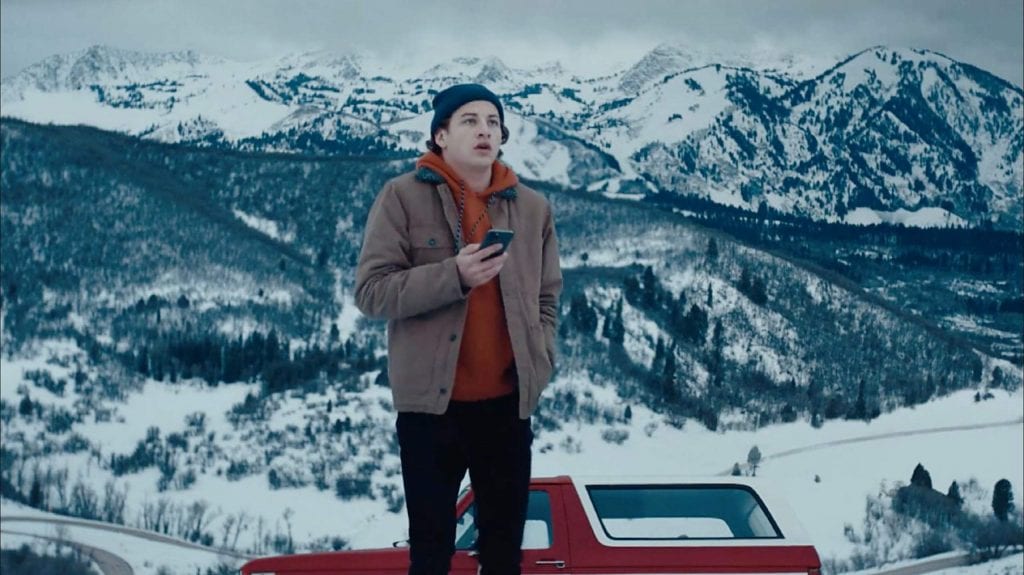 Watching a movie on a smartphone felt like mortal sin to me until I watched “Wireless.”

The survival thriller, set on a snowy roadside here in Colorado ski country, is the last best shot by the mobile platform Quibi to find an audience and is a remarkably effective use of new digital storytelling technology.

The 10-part short-form series follows University of Colorado bro Andy (Tye Sheridan) driving alone from Boulder into the mountains for a New Year’s Eve house party in an unnamed ski town where his buds are already “shotgunning beers at midnight in every single time zone.” Then disaster slowly strikes and Andy gets stranded.

Sheridan is more than passable as a standard-issue Boulder bro — anybody from Colorado will recognize this dude, though the filmmakers freight him with some extra family and substance abuse baggage.

For anybody who lives here on the Western Slope, “Wireless” will likely conjure up some bad memories of winter trips westbound on Interstate 70, when Eisenhower Tunnel closures left you stranded, when you sit parked waiting for an accident to clear for hours worried you’d run out of gas, or — as is the case with Andy — when you took a bad detour or shortcut.

The plot is essentially about the perils of following Google Maps or Waze on a trip back from the Front Range. With hellish realism, it plays out the worst-case scenario of leaving I-70 for an alternate route in winter.

At the end of Episode Two — each entry is eight minutes long and takes 10 percent of Andy’s battery life — he crashes into a snowbank. He’s stuck, it’s snowing, it’s freezing, it’s getting dark. His phone, its battery draining, is his only lifeline.

The film, which premiered Sept. 14, uses new “Turnstyle” technology that makes it so that the action on the screen changes whether you’re holding it vertically or horizontally. Held upright, your view is what Andy sees on his phone. Held in landscape, you see a more-or-less traditional cinematic view of Andy.

To get the whole story, you have to hop between both and — when the writing, directing and technology are at their best (as they often are in “Wireless”) — this is not only a novel experience but it feels like a genuinely new and worthwhile art form.

Director Zach Wechter builds character, mood and tension with the two-screen storytelling as we see Andy’s phone view playing Brockhampton on Apple Music, calling his brother on FaceTime, scrolling Tinder and Instagram, texting, watching TikTok, talking to Siri or following Google Maps (it shows him stranded off of a tiny backroad, northwest of Idaho Springs, where this certainly could happen).

Early on, there are on-screen reminders telling you to move your phone for the full experience. As it goes on, this becomes more intuitive. I ended up watching in landscape, and switching over whenever I heard the ding of an app notification or the click-clack of Andy typing out a text.

Combined with the fact that nearly episode ends with a cliffhanger, this makes “Wireless” a bingeworthy but digestible experience. It makes you wonder whether, if “Wireless” had launched Quibi back in April, the new platform might have caught on instead of becoming the butt of industry jokes.

Don’t have Quibi? You’re not alone. The service has been deemed a failure. With $1.8 billion in funding, with the titans Jeffrey Katzenberg and Meg Whitman as its top execs, and with creators from Steven Spielberg to Chrissy Teigen signed to make shows. (“Wireless” comes under the executive producing imprimatur of Hollywood giant Steven Soderbergh, who has been a trailblazer of smartphone-shot features including “Unsane” and “High Flying Bird”). If it was a good idea, it was a good idea at a bad time.

Quibi’s pitch is that it provides short, high-quality video programs produced for your phone. It was made for a pre-COVID world of train and bus commutes and lives on-the-go. When it went live in April, nobody alive was on-the-going anywhere.

So a few million people downloaded it, but almost none stuck with the app as active users. This week, the Wall Street Journal broke news that it was for sale less than six months since its much-hyped launch.

None of Quibi’s shows broke through as hits. “Wireless” could start changing that. It’s a great conversation piece. I’d love to talk about it. If only I knew somebody else on Quibi.