Wildfires in Colorado grow to a combined 130,000-plus acres with no end in sight 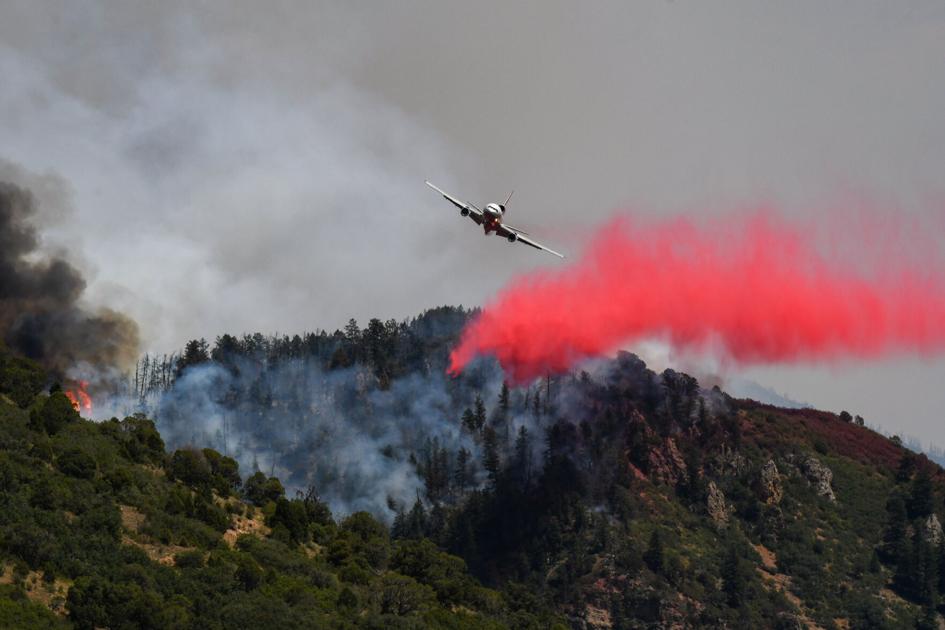 Burning unchecked by fire lines or the weather, four major wildfires on the Western Slope grew to a combined 130,000-plus acres on Sunday with the outlook for the coming week just as dire, officials said.

The Grizzly Creek fire east of Glenwood Springs grew 30% by Sunday to 26,000 acres. The fire has been the highest firefighting priority in the nation due to the Colorado Department of Transportation having to shut down Interstate 70 through Glenwood Canyon since it broke out Aug. 10 because of the proximity of the flames.

“This fire will continue to burn for some time,” Marty Adell,  fire incident commander, said at a Sunday evening briefing. “There is a lot of fuel out there. Weather is setting up not exactly in our favor.”

Despite more than 600 firefighters and air support, it remains zero-percent contained.

Above average temperatures — possibly record-breaking temperatures — are expected for the next week, with “very low chance of precipitation,” Adell said, adding that dry thunderstorms could add to the threat. Fire risks are rising in California, Oregon, Idaho and Nevada, creating competition for the resources needed to bring the fire to heel.

Hanging Lake in Glenwood Canyon, a popular tourist destination, continues to be spared, but the fire has reached the trailhead and burned along the trail’s lower reaches, said White River National Forest Supervisor Scott Fitzwilliams, warning it will have an affect on the canyon’s charm.

“It’s going to change,” Fitzwilliams said. “But I don’t want you to think in your head it’s all blackened canyon walls.”

Fire commanders hope to send aircraft to help protect the treasured National Natural Landmark, but said the priority remains other areas where the fire poses a greater threat.

I-70 will remain closed for the foreseeable future, with fire burning along the shoulder in some areas, Fitzwilliams said.

Three other major wildfires also grew as firefighters were unable to make any headway in containing them in the face of hot, dry and windy conditions.

The lightning-sparked fire is the fifth larges fire in the state’s history.

More than 750 firefighters are battling the blaze that started July 31.

Early Sunday, the Cameron Peak fire had grown to more than 5,750 acres, while the Williams Fork fire was 6,300 acres with zero percent containment and “extreme fire behavior,” the Colorado Division of Homeland Security and Emergency Management said in a tweet. A Type 1 Incident Management Team has been ordered to manage the blaze.

Smoke from the fires has created air quality and health concerns along the northern and central Front Range,prompting warnings for heart and respiratory problems to avoid going out or engaging in strenuous activity.

No injuries have been reported from any of the fires and no structures have yet been lost except an abandoned building burned in the Pine Gulch fire.