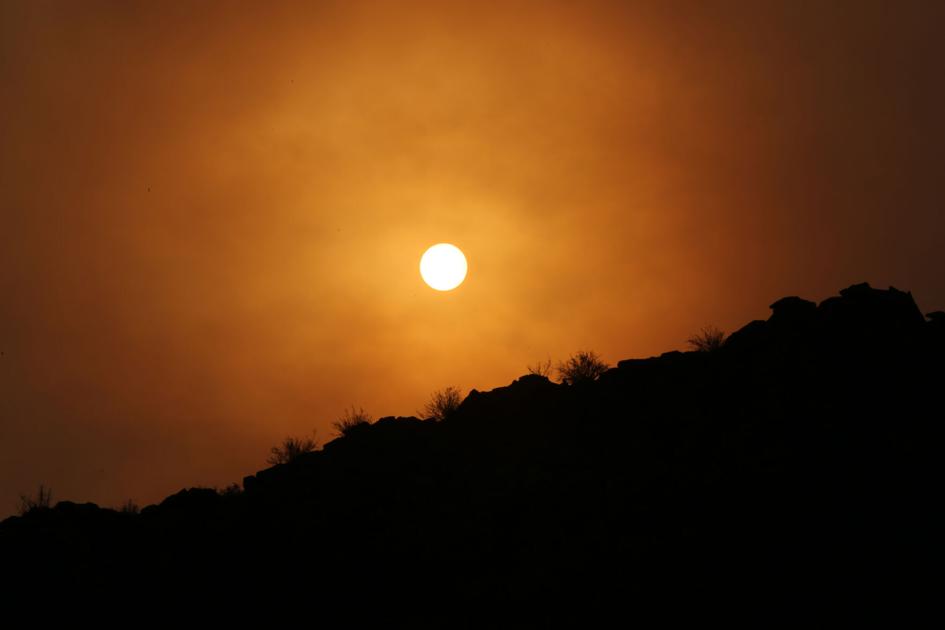 For successive days this week, Colorado ranked among the worst cities in the world for air quality, and statewide alerts warning of the dangerous haze have become a constant part of summer life here.

There are a combination of factors driving the air quality’s recent deterioration, not least of which is man-made pollutants. But experts say that wildfire smoke, both locally and from across the West, plays a significant role in driving down air quality, and the fires – and the smoke that they bring – will become an increasingly dominant driver of air pollution in the years to come.

What’s more, a growing body of research points to adverse health effects, including more deaths and hospitalizations, associated with exposure to wildfire smoke. The smoke specifically affects the respiratory and the cardiovascular systems as inhaling the tiny smoke particulates causes inflammation and decreases lung function, among other things, and research indicates it’s particularly dangerous for the elderly, for pregnant women and for people with pre-existing conditions.

“The smoke is a silent epidemic,” said Sheryl Magzamen, a Colorado State University researcher who studies air pollution and published a paper this spring about the health impacts of smoke on Colorado.

That study looked at six years of health and air quality data in Colorado. Smoke particulates are small enough – more than 30 times smaller than a hair on your head – that they can “go really deep into your lungs and actually pass into your blood stream,” said Sarah Coefield, who works for the city of Missoula, Montana, on air quality. Magzamen’s study found that exposure to smoke “was positively associated with hospitalizations for all respiratory outcomes combined, asthma, COPD and acute bronchitis; and cardiovascular morbidity, including hospitalizations for all (cardiovascular disease) outcomes, cerebrovascular outcomes, heart failure, and (ischemic heart disease).”

It also found an association between smoke exposure and deaths from asthma and heart attacks.

The study is far from the first to link worsening health and mortality to wildfire smoke. A California study from earlier this year found that inhaling particulates from wildfire smoke is “up to 10 times more harmful on human health than (pollution particulates) from other sources.”

Other air pollutants have negative impacts on health, as well. But wildfire smoke is unique for a few reasons, experts said, that make it particularly worrisome for the coming century. For one, Magzamen said that pollutants from cars and coal-fired power plants – man-made pollutants spewed into the air – have started to decrease and will continue to, as cars become cleaner and old plants are taken off line.

Research indicates that the fires will keep burning as the years go by. A 2016 study published in the Proceedings of the National Academy of Sciences determined that climate change “doubled the western U.S. forest fire area beyond that expected from natural climate variability alone during 1984–2015” and that man-made climate change “is projected to increasingly promote wildfire potential across western U.S. forests in the coming decades and pose threats to ecosystems, the carbon budget, human health, and fire suppression budgets.”

Colorado’s three largest-ever fires burned simultaneously last October, a sign not only of the increased prevalence of the burns but the extension of the fire season. Scientists have laid much of the blame for the increase on climate change, which drives drought and heat, creating a tinderbox for fires that are often ignited by humans.

The authors of the National Academies of Sciences study suggested that at some point, enough trees and fuel may burn that fires will decrease. But that hasn’t happened yet, and until it does, climate change will “impose an increasingly dominant and detectable effect on western US forest fire area in the coming decades while fuels remain abundant,” they wrote.

Compounding the problem is that even if Colorado found a way to stop fires here, smoke from elsewhere would continue to hurt Coloradans. When fires burn, the smoke rises as the air heats. Larger, more intense fires mean smoke rises further into the atmosphere and can be transported longer distances, said Kate O’Dell, another CSU researcher who specializes in atmospheric science. Fires from California, the Pacific Northwest and British Columbia can waft over Colorado.

What O’Dell and Magzamen found in their study from earlier this year is that local, or “fresh,” smoke – meaning from fires here in Colorado – appeared to have less of an impact on health than “aged” smoke from fires hundreds of miles away.

There are multiple theories as to why that is, Magzamen and O’Dell said. One is that the longer smoke hangs in the atmosphere – like when it travels across states to get here – “the more stress they can cause when inhaled,” Magzamen said. But O’Dell said researchers are still trying to find out if the smoke becomes more toxic as it ages.

The other explanation is behavioral: When fires burn in Colorado, there’s local media attention and government messaging. You can step outside and smell the smoke and see it for what it is: smoke hanging over your home or town. The CSU researchers suspect that local attention can help keep people indoors, prompt at-risk residents to take precautions and medications, and can lead some to ensure their breathing in clean air at home or indoors.

But smoke from elsewhere doesn’t have the same smell, Magzamen and O’Dell said, and it doesn’t look like smoke created from local fires. There’s also far less local messaging: Though alerts may be sent about air quality, there’s less focus specifically on wildfire smoke and its constant presence, the researcheres said.

Though experts are still parsing out the exact details across the burgeoning research field in wildfire exposure, there is strong evidence of its adverse health impacts. Coefield, the Missoula official, pointed to a study by the University of Montana that examined the health of people who were exposed to extremely high levels of smoke particulates – roughly five times higher than what the federal government would classify as “unhealthy” – for a prolonged period in 2017.

That study, published in August 2020, looked at residents of Seeley Lake, who four years ago were surrounded by four fires all within a 50-mile radius. The researchers “found a significant decrease in lung function,” and it remained decreased in many residents for two years.

“This is one of the biggest public health issues,” Coefield said. “The wildfire smoke has essentially undone the good of the Clean Air Act. … It’s very, very bad. It’s one of our most significant public health challenges because you can’t not breathe the air. You don’t have a choice about breathing.”

Jon Samet, the dean of the Colorado School of Public Health who co-authored a recent study on wildfire smoke, said people should consult with their doctors to get a sense of their potential exposure and risk. But people with co-morbidities – like asthma or COPD – are at higher risk.

There are solutions, though they remain downstream and treat only the symptoms, not the disease, Magzamen said: It’s akin to treating cancer patients with painkillers instead of chemotherapy. The “policy levers,” as she called them, that are being pulled to slow emissions elsewhere don’t exist for fires. There’s no magic bullet to end the drought ravaging the West; its root cause is climate change.

“We are always on reactive mode, and public health is all about prevention,” Megzamen said. “We area really frustrated again with the concept that we have so few tools to actually prevent these wildfires occurring.”

The symptoms can be treated to an extent. If the CSU researchers’ hypothesis is correct, then public messaging can help keep people indoors and aware of the present risks of smoke exposure. That would need to improve, experts said, when it comes to tracking smoke traveling from further west.

Coefield said there should be a three-pronged approach to protecting people from the smoke. First, public buildings – from movie theaters to libraries – should have better filtration to clean the air. Second, people need to be educated on how to clean their own environment. Air conditioning doesn’t necessarily mean clean, she said, and filters are available. Even a store-bought box fan can be converted into a filter.

And finally, Coefield said, there need to be programs to help people particularly at risk. That would include solutions aimed at the homeless and others who don’t have access to materials to clean their air.

“We need to become a society with smoke-ready communities,” she said.

California, she said, had created a policy under which workers must be given respirators or filtered air if the quality drops. The mayor of Seattle announced in 2019 a pilot program to build five clean air shelters, which various experts who spoke to the Denver Gazette for this story all endorsed.

In Missoula, officials have stepped up messaging to educate the public about the risks. Last year, the city had a “wildfire smoke ready week,” Coefield said, complete with a special beer brewed locally. A nonprofit in town doled out 100 air cleaners in half an hour, and Coefield’s loaned out portable air cleaners to day cares and preschools to help protect children.

How much progress can these efforts – and others, on a similar scale – make to at least blunt the problem? Without an influx of funding, “not enough,” she said.

“When there’s a public health emergency, you think there’s going to be somebody to come in and save the day,” Coefield continued. “For wildfire smoke, there isn’t.”