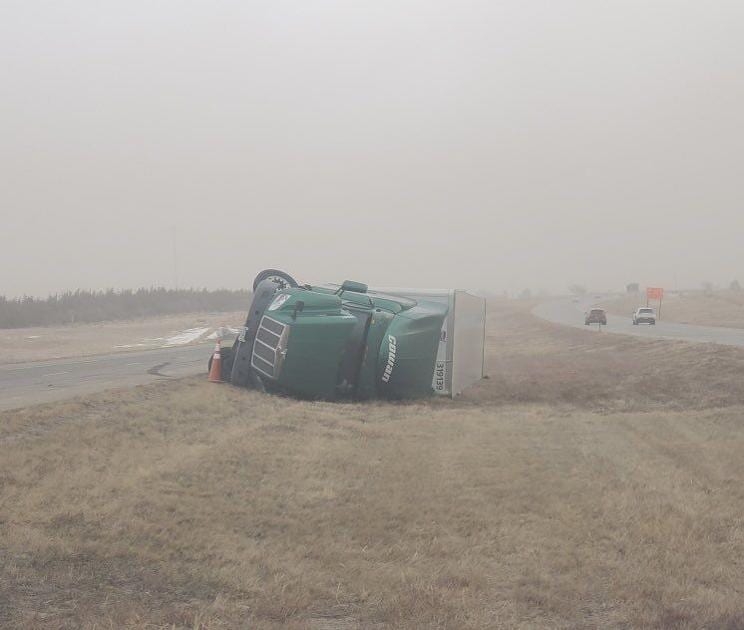 Colorado has been getting hammered by snow and high-speed winds on Wednesday, especially in the Eastern Plains region and along the I-70 mountain corridor. This has resulted in travel hazards throughout the day, including one case in which a semi-truck ended up on its side.

According to the Colorado State Patrol, the high speed winds toppled the semi on I-70 at mile marker 404. This is located near Seibert on the Eastern Plains, which is found between Limon and Burlington. Photos from the scene were published at about 8 AM.

I70 at MP 404. Pushed over semi and low visibility. If you are traveling today take extra care. We want you to arrive for the holidays safe. 2020 is almost over! #BUCKLEUP pic.twitter.com/4XGvVA3xI4

Another tweet from Colorado State Patrol included the quote “falling asleep, strong winds, and low visibility make for dangerous conditions.” Accompanying this tweet was a photograph of a second semi that had flipped on its side after being rear ended by pickup along the same stretch of road.

Falling asleep, strong winds and low visibility makes for dangerous conditions. 2 crashes on I70 at MP 400 & 423-one is a semi blown over and the second a pickup rear ended a semi….😳🌬. Be careful today!! pic.twitter.com/5CuaHvLn3t

The high-speed winds also prompted the Colorado Department of Transportation to close US 287 between Kit Carson to Lamar (mile markers 86 to 133) due to lack of visibility. A section of US 40 between Limon and Kit Carson also remains closed for similar reasons.

Delays are expected in ski country as US 6 over Loveland Pass remains closed on Wednesday due to safety concerns stemming from adverse weather conditions.

Wild winds are expected to continue for a second day after lashing out on Tuesday evening along the Front Range and northeastern plains. The strongest recorded wind occurred on Pikes Peak, where the National Weather Service clocked a gust at 95 mph at 10:22 PM on Tuesday night near Colorado Springs.

Check CDOT’s Facebook, Twitter (@coloradodot) or cotrip.org for closures and delays on highways and roads across Colorado.