Who buys fireworks at 3 a.m.? Inside a 24-hour fireworks tent in Colorado – Longmont Times-Call 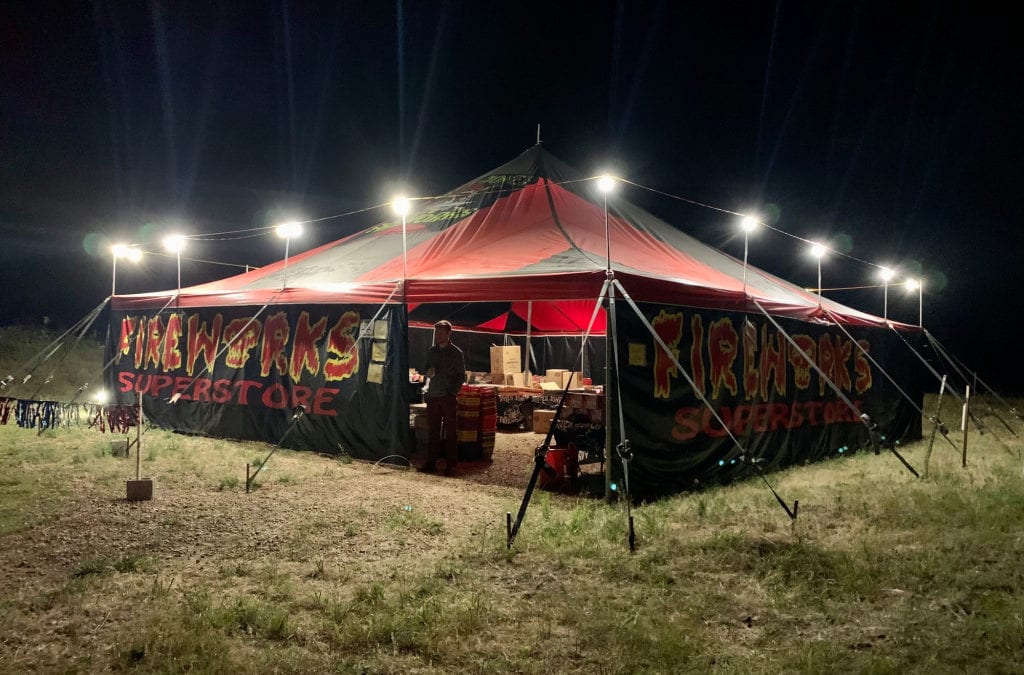 It’s 6:29 a.m., and the sun rose an hour ago. Gary Reckelhoff and I haven’t seen another human for over six hours. Walking up to the fireworks tent is a gentleman who identifies himself as Gene Hornbacher. He’s in his late 60s and calls us his victims.

Hornbacher calls anyone who converses with him a victim because a simple chat can easily last 90 minutes, as it did on this day.

But why are we here?

For Reckelhoff, he moved into an airstream and drove from Cincinnati because he thought spending two weeks selling fireworks overnight sounded like a cool story.

Hornbacher has spent four decades getting coffee at the market attached to the gas station next to the tent.

And me, I wanted to see what would happen if I spent the night in what is probably Colorado’s lone 24-hour fireworks tent.

Wait, why is there a 24-hour fireworks tent? Simple, because they have no efficient way to lock it, so they might as well just keep selling since they would have to pay somebody to work security anyway. How does somebody get the job of manning the tent in the wee hours? Reckelhoff knows somebody who knows someone who knows another person.

I came here to answer the question of who buys fireworks after last call at a round-the-clock tent outside of Boulder. What the night lacked in customers, it made up for in eccentric characters. The core of Colorado can be found at the Davey Jones Fireworks tent near Eldorado Springs — its beauty, people, history and wackiness.

Reckelhoff, 33, says he has no experience in fireworks, but after hours of chatting, it hits him that he does have some. The avid mountaineer used fireworks to scare wild boar off his path while making the first known ascent of Agrihan in the Northern Mariana Islands. The 2018 expedition was the last unsummited high point under any territory’s flag. Reckelhoff even had to help measure where and how high the actual summit is.

Reckelhoff’s life’s motto is to “live your life like a story.” It’s how he ended up atop Agrihan with Ginge Fullen, who holds the world record for the fastest ascent of every single high point in Europe and Africa. Reckelhoff has bagged 50 of the United States and its territories’ high points with only six to go. He believes he may be one of the first people to accomplish all 56.

“So nobody else has to.”

Looking for stories is what drew Reckelhoff to the edge of Marshall Mesa, selling fireworks at this tent that’s been in operation for the last 30 years, first by Larry Russel and now by his granddaughter Ashley Lewis, 31.

The metal stakes keeping the tent in place are across the street from the old Gorham Mine, where the first coal in Colorado was found and extracted in 1859. For 80 years, labor-intensive mining occurred at the foot of the Flatirons in Marshall. The story of the mines are a microcosm of Colorado’s story, and, to this day, you can see some circular foundations used as water tanks by the mines. It’s one of the few remnants of the 51 recorded mines that were across the street. The water tanks often came with machine guns mounted atop to help the mine companies in the Colorado Coalfield War.

Some of the men striking on the day of the Columbine Mine massacre in 1927 — when six were gunned to death — were Marshall natives working a neighboring mine outside Erie.

Hornbacher said when it’s cold, he can see smoke billowing from below the mesa due to an uncontrolled, underground coal fire that’s been burning since 1869.

The only steam puffing on Wednesday morning was from Hornbacher’s coffee as he talked to me about the Bible and Billy Bob Thornton.

Eventually, most of the stock at the tent will be up in flames. If it came from somebody who bought it in the middle of the night, the customer was most likely a University of Colorado student or a parent of a family who works odd shift hours taking home the materials to have a block party instead of attending a large gathering.

Among the wild visitors over the years have been curious coyotes, people with nothing better to do, and young professionals who spent an exorbitant amount to display their patriotism. Lewis said sales continue to pick up as it gets closer to Independence Day.

The tent is blasting songs like “American Girl” by Tom Petty and the Heartbreakers. Reckelhoff and I occasionally vacate the inside to stand next to a statue of a bison, where we watched as the moon illuminating the Flatirons was slowly replaced by an early morning alpine glow.

Eventually, Reckelhoff was replaced by Jennifer Gutmueller, who works the morning shift but had done nights the past four years. Reckelhoff says goodnight and heads to catch some rest in the airstream parked out front while Gutmueller begins to dust the wide array of fireworks named things like Rockin Grandpa, What Just Happened and Liberty.

Why did I try to answer the question of who buys fireworks at 3 a.m? To steal a line from my new friend Gary, “So nobody else has to.”