While small in number, followers of Colorado Springs Bahá’í faith have big hopes 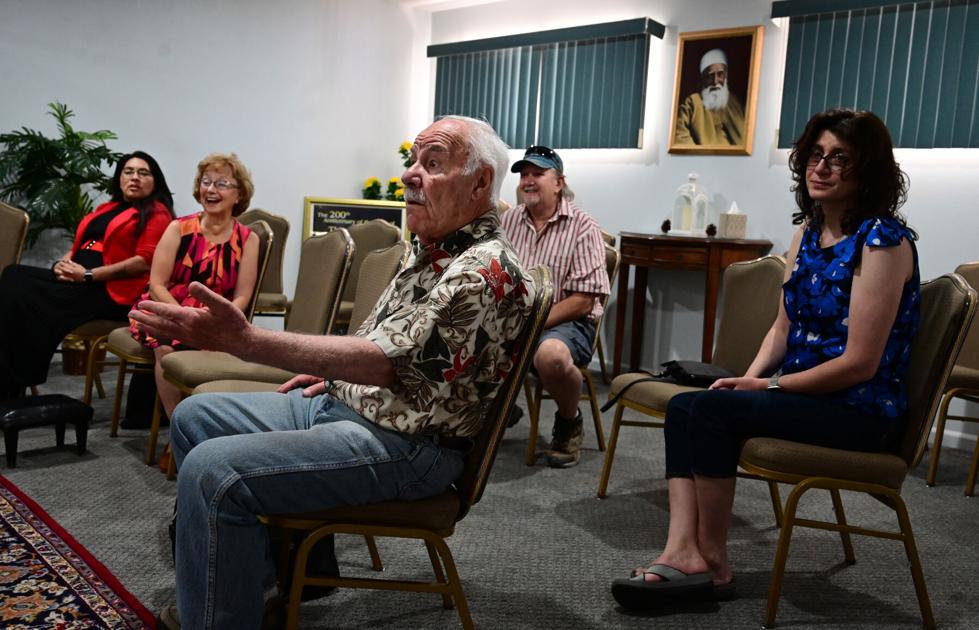 Bahá’ís of Colorado Springs don’t hesitate to explain their faith, but they do so delicately.

They might start with the faith’s relationship with Christianity, as that’s the religion of most of their neighbors.

Starr Opong remembers “very Christian mom friends.” They would go on stroller walks and ask Opong about going to heaven.

Growing up Christian in Ghana, good and evil were concepts at the forefront for Fred Buah, a member of the Springs’ Bahá’í community since 2005. Now “I find myself defending Islamic religion,” he says. “Someone I thought was going to hell, now I learn from.”

The Bahá’í faith (pronounced buh-high) is an acceptance of all faiths, an education of all major prophets, from Christ, to Abraham, to Muhammad, to Buddha. That is one way for followers to answer the question of the relatively young and obscure religion.

One gets a better idea by glancing across the walls of the community center.

Reads one poster: “The Aim of the Bahá’í Faith: To Unify Humanity.”

There’s a pamphlet listing hallmarks of the faith: “God loves all of us. … You are responsible for your own spiritual growth, not your preacher, not your parents, not your pals. … Women and men are equal. … You are essentially good. … Your head and heart don’t have to be in conflict. Science and religion, faith and reason, are just different ways of looking at God’s creation.”

There’s a booklet outlining concerns of the Universal House of Justice, the Israel- based governing body of Bahá’í.

“Racism, one of the most baneful and persistent evils, is a major barrier to peace,” reads one line.

Reads another: “The inordinate disparity between rich and poor, a source of acute suffering, keeps the world in a state of instability.”

And another: “Unbridled nationalism, as distinguished from a sane and legitimate patriotism, must give way to a wider loyalty, to the love of humanity as a whole.”

There’s a pamphlet more deeply addressing that relationship with Christ, described as “absolutely central to the Bahá’í faith.” But Opong knows how Christian friends might read this, in a place incorporating other holy books. She knows because she was raised a devout Christian, raised to understand Christ as “the way, the truth and the life.”

She was struck by her first visits with Bahá’ís years ago. They looked more like her than church congregations she’d known. They were white, Black and brown. They were young and old. On Sundays, they would simply sit together and read divine text and discuss. There was no clergy. No one person talking more than any other.

“What was held most important was your own spirituality,” Opong recalls, “and your own individual investigation of truth.”

Curiosity connects Bahá’ís, says Stamats, a member of the local community since the ’80s. He joined the faith in 1969 as a college student in Florida, having by then become jaded by his Presbyterian upbringing.

He couldn’t understand why he and friends of other denominations followed different rules. He saw leaders abuse religion in the fight for civil rights, a movement that was central to his life.

“You may have looked at me as a hippie, but I’d like to think I was much more proactive,” Stamats says. “I wanted to eradicate all wrongs. I felt this Bahá’í faith was another thing I was gonna find all the screw-ups in.”

But he appreciated aspects that felt far removed from other religions, particularly when it came to leadership and organization.

There were nine-person assemblies elected in local communities. But these members did not run for election, as if seeking to gain something; they were simply chosen by fellow Bahá’ís. No position had more power than the others. Each was chosen for their knowledge — for their ability to add in Sunday discussions, to manage the books and pay bills, to build camaraderie and plan youth events, for example. But the Bahá’í way is to never own ideas. Bahá’ís are taught to speak ideas and let a consensus decide. That, too, appealed to Stamats.

He has filled most assembly positions throughout his time in the Springs. Locally, he estimates himself to be one of maybe 100 active Bahá’ís.

While small, Stamats believes the local community to be deeply rooted, going back to the early 1900s. The faith was not yet a century old by then.

It was founded in present-day Iran by a man named Bahá’u’lláh, who lived from 1817 to 1892. He was born into wealth, but he is known for abandoning that life to tend to the poor and proclaim a new revelation from God. Bahá’u’lláh’s ministry largely took place in prison. He was foe to the Muslim clergy and Persian government.

His followers are estimated to be more than 5 million today around the world. They continue to be persecuted and killed in places such as Iran and Egypt.

The pain reaches across the globe to Colorado. Buah remembers what Ghana elders told him in the face of his village’s hecklers.

“Nope, you guys cannot be upset. You cannot go over there and talk to them,” Buah says. “That’s just their understanding. Let them be.”

Opong also finds peace in her faith. She feels fortunate, she says.

“It makes me feel incredibly privileged to live in this country where we have freedom,” she says.