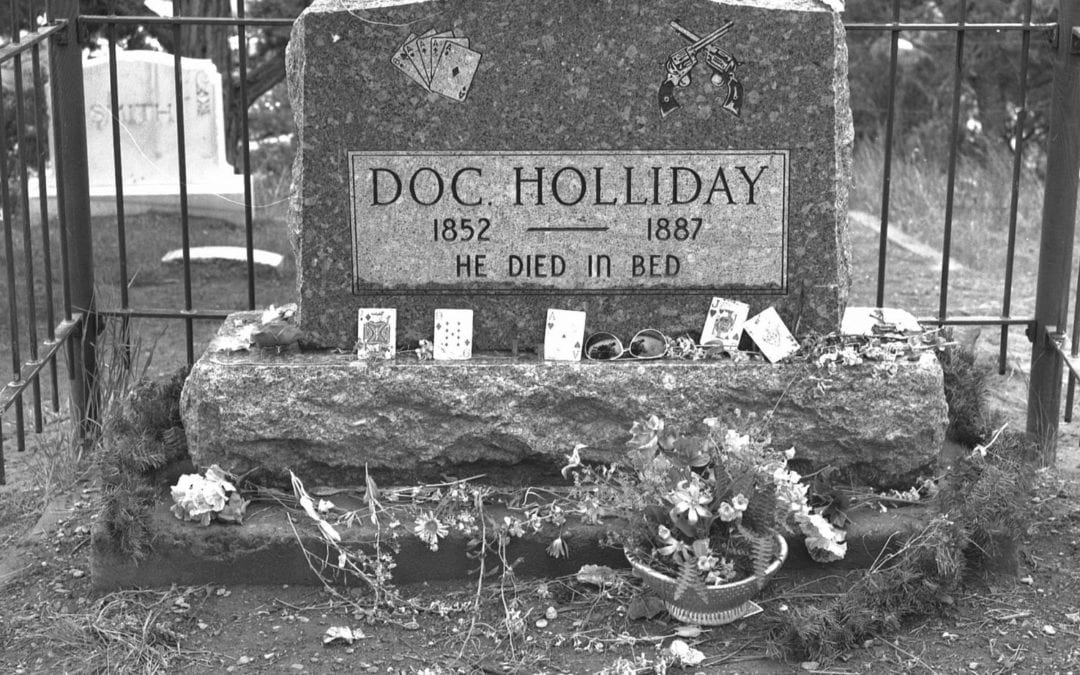 From left, Jim Cavoto, director of the Fairmount Heritage Foundation, points a flashlight for Joseph Petrovich, of Denver, to read a tombstone during a tour at Fairmount Cemetery on Oct. 9 in Denver. Rachel Woolf, Special to The Denver Post)

There’s nothing spooky about Jim Cavoto’s October history tour of Fairmount Cemetery — unless you think that nighttime romps around gravestones with only a flashlight are scary.

The tales told during this dark walk are more about the mysterious, famous and infamous residents of the property, not zombies, ghosts or werewolves. (But you will likely hear howls and sirens as you wander that may sound a little suspect.)

“The cemetery, like the world we live in, has the good, the bad and the ugly,” said Cavoto, who has been running tours for around five years.

Fairmount Cemetery was founded in 1890, modeled after the beautiful Mount Auburn Cemetery in Boston. Cavoto leads the History Mystery Tour, as well as other tours, a volunteer job he took after becoming head of the Fairmount Heritage Foundation. Before that, Cavoto was the vice president of the cemetery, a job he took on in 1983. He knows the residents of the cemetery well, and after taking a tour with him we learned a cache of intriguing Colorado history.

“I came tonight because it’s part of the excitement of it being Halloween time, as well as going back into history,” said guest Delia Rocca, who has been on the tour four times. “I always learn new things, and Jim knows history like the back of his hand.”

We started at 7 p.m. one recent Friday. The only light came from the Ivy Chapel, where we met Cavoto and a handful of volunteer actors dressed up in historic funeral costumes. One woman sported a suffragette’s sash, a reminder that there is another tour available about the famous women buried in Fairmount Cemetery.

There were no spooky sounds or tricks to try to scare people, just eager bodies, all socially distanced, waiting to learn more about who was buried around them.

And one day, added Cavoto, he will be one of the permanent residents.

It was hard to track how many gravesites we stopped at during the nearly 3-hour tour, but it didn’t feel overwhelming. Each person discussed had done something to add to the history of Colorado, for good or for bad. Some, like Emily Griffith, who built a school, helped turn Denver into a great place to live. On the unsavory side, Colonel John Chivington, who lead the Sand Creek Massacre in 1864, is buried there not far from Sun Bow Wooton, a woman who pretended to be Native American all the way into her death.

The gravestones sported names of moguls, mesdames, eccentrics and philanthropists, all important to Colorado’s history (though many have long been forgotten by today’s residents).

The next nighttime tours at Fairmount are scheduled for Oct. 16-17, 23-24 and 30 at various times during the evening; Riverside Cemetery History Mystery Tours are on Oct. 16-17 at 7 p.m. Tickets are $35 and can be purchased online at fairmountheritagefoundation.org.

Apart from the tours, Fairmount Cemetery and other graveyards and burial sites in Colorado remain open year-round. Tap into the paranormal and/or visit some of the state’s most famous residents using this list as a starting point.

Of all the gravesites in Colorado, Buffalo Bill’s may be the most famous and has a prominent spot on Lookout Mountain. Cody was a showman who hunted bison, was a Pony Express rider, fur trapper, gold prospector and performed as an actor in Buffalo Bill’s Wild West, a show that often gave exaggerated and sometimes false dramas centered around the American West.

Baby Doe Tabor (Elizabeth Bonduel) was a beauty who scandalously married a wealthy silver mogul twice her age. Eventually, all the fortune was lost and she died alone in a shack in Leadville. Tabor’s legacy long outlived her, and there was even an opera written about the woman by Douglas Moore called the “Ballad of Baby Doe.”

Gunslinging gambler John Henry “Doc” Holliday is buried in Glenwood Springs, and a short and pretty hike will take you to his modest grave in an old cemetery. Holliday, who got the name “Doc” due to his honest profession as a dentist, died of tuberculosis while staying at the Hotel Glenwood.

Author Phillip K. Dick wrote 36 novels and numerous short stories, most with a science fiction twist. He famously penned “Do Androids Dream of Electric Sheep?,” “Total Recall,” and “The Minority Report,” all of which made into movies (the first under the name “Blade Runner”). Dick doesn’t have a real connection to Colorado, save it’s where his twin sister was buried in 1929. He wanted to rest next to her, and their dual gravestone can be found in Fort Morgan.

A resident of Woody Creek near Aspen, Hunter S. Thompson was a writer famous for starting the gonzo journalism movement and chronicling his eccentric, drug-fueled lifestyle. His “Fear and Loathing in Las Vegas” was adapted twice into a movie, and much of his work was published in Rolling Stone magazine. One Feb. 20, 2005, Thompson committed suicide on his property in Woody Creek. In true Thompson fashion there wasn’t a normal memorial service. Instead, his ashes were fired from a fist-shaped cannon along with fireworks. While you can’t visit a specific grave site, just being in the area makes one wonder if that speck of dust could be a piece of this great writer.

Like Hunter S. Thompson, there’s not a gravesite for singer-songwriter John Denver, whose ashes were scattered in the Rocky Mountains. But the city of Aspen erected a memorial park that anyone can visit. Denver died when the plane he was piloting crashed in California. Pay homage to this musician by listening to classic Denver songs such as “Rocky Mountain High” and “Take Me Home, Country Roads” while you wander around the 4-acre property.

Frederick Bonfils founded The Denver Post in 1892. His influence can be seen in his grave, which is in the Fairmount Mausoleum, a grand construction boasting the largest stained glass collections in Colorado as well as other notable interments, such as Charles Boettcher, Charles Gates Sr. and architect Frederick E. Mountjoy.

Chances are the name Iliff rings a bell, especially if traveling in South Denver, Aurora or  Parker. The avenue gets its name from this gentleman, who also founded the Iliff School of Theology. Iliff is also known for having created the largest cattle ranch the state has ever known. That was in the 1860s and, at his peak, Iliff sold around 35,000 head each year.

Helen Peters Nosworthy is credited with naming the Ouija Board, something anyone who has watched “The Craft” and other spooky movies knows about. If you think her gravestone looks new, you’d be right. It was erected in September 2018 by the Talking Board Historical Society. Nosworthy obtained a patent for the name by “letting” the board spell out the chief patent officer’s name.

While thousands of people brag about climbing fourteener Mount Evans, most don’t realize it was named after John Evans. Evans is the founder of the University of Denver and promoted statehood for Colorado.

The infamous Barker-Karpis Gang terrorized the Midwest during the Great Depression, and Lloyd William Barker was part of it. The gang was run by his mother, Ma Barker.  Lloyd turned his life around after serving time in Kansas’ Leavenworth Prison. He worked for the army and then later at a restaurant in Denver. Despite the shift, Lloyd was shot by his wife in the couple’s home.

Linda Lovelace, née Linda Boreman, is best known for her star roll in the pornographic film, “Deep Throat,” which came out in 1972. Lovelace became famous both for her movies and for the fact that she only made $1,250 while her work grossed millions. You won’t be able to find her grave, however; it remains unmarked.

Alfred Packer gained fame for allegedly eating his traveling companions (thus his nickname, the Colorado Cannibal). As the story goes, Packer was on an expedition to find gold between 1873 and 1874. Along the way, his company ran out of food, something happened to the other men, and Packer ate their flesh to survive. Though what really happened can’t be determined, Packer admitted to killing one man and cannibalizing him. After that, he became a vegetarian.