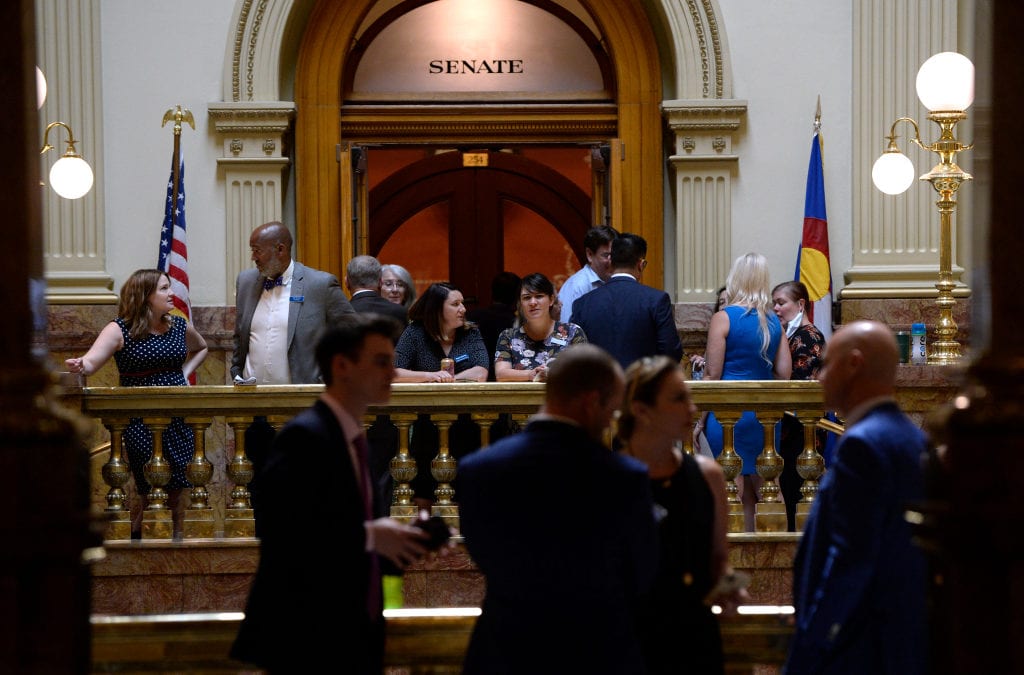 Colorado Rep. Tracey Bernett has been telling people she’s “busier than a feather merchant in a windstorm” as the end of the legislative session approaches. She even prepared until 2 a.m. Friday so she could answer any questions in the House about two of her bills.

But the first-term Boulder County Democrat isn’t beaten down by the 12-hour (or more) days passing one big bill after another, the continuous debates or the committees and floor work running late into the evenings at the Capitol. “I feel like I’m making a difference,” she said, “a serious difference.”

Colorado lawmakers must end the 2021 session no later than Saturday night. And from Tuesday, June 1 to Friday, the Democratic-led legislature passed mostly along party lines new fees to go toward fixing roads, new gun laws, new protections for tenants and a new rule: no more derogatory American Indian mascots in public schools. All of the bills await Gov. Jared Polis’ signature.

But plenty still needs a final vote, things like a public-private insurance plan, the most sweeping restrictions on marijuana since recreational use was legalized in 2012, labor protections for agricultural workers, holding institutions accountable for child sex abuse, property tax breaks and a bill to lessen dependence on plastics. (Check out The Post’s bill tracker for where major legislation stands in the final days.)

Democratic lawmakers don’t anticipate slowing down until they adjourn. But Watkins GOP Rep. Rod Bockenfeld said Republicans, who are outnumbered 24-41 in the House, sometimes have to slow things down in the interest of conservative constituents.

“From my personal perspective, it’s all about getting and giving the message of the constituents that elected me here out on the floor,” he said.

The logjam of bills really seemed to break Thursday evening, when the Senate gave final approval to 16 bills.

With housing issues dominating headlines during the pandemic, Colorado Democrats were keen on making changes in the rental market. Senators gave final approval to SB21-173, which guarantees renters a weeklong grace period before getting slapped with a late fee instead of as early as one day. It also restricts late fees to either $50 or 5% of overdue rent — whichever is higher.

With a federal eviction moratorium expiring June 30, SB21-173 would let Colorado renters stave off evictions as long as they pay rent at some point before an eviction is finalized instead of the current 10-day period. And it also makes it harder for landlords to evict people from units that are unsafe, unclean or unhealthy.

“Overwhelmingly, you’ve got good tenants and good landlords. But what happens when things get hard?” said Julie Gonzales, a Denver Democrat who sponsored the bill. “When a global pandemic hits? When somebody is a few days late on rent? … Just having a few days to come up with the rent can mean the difference between stability versus moving into a car or finding yourself on the street.”

Another thing Coloradans couldn’t ignore this year was mass shootings, with the state seeing at least two, including 10 people who were fatally shot at King Soopers in Boulder. Before that happened, Democrats had three gun bills at the ready, and added another three in late April.

SB21-256, which gives local governments the ability to put in place stronger gun laws than the state’s, was among the bills that passed Thursday in the Senate. HB21-1299, which creates an Office of Gun Violence Prevention, received the legislature’s stamp of approval earlier in the week and HB21-1298 to expand background checks for gun purchases is likely to clear its final hurdle.

Republicans opposed all of the gun bills, saying they don’t get to the root of the problem — which they believe is mental health. Colorado Springs GOP Rep. Dave Williams called the measures an overreach by Democrats, saying the bills “punish law-abiding citizens who want to defend themselves and they empower criminals who endanger our neighborhoods.”

The hallways in the Capitol building were crowded on June 4, 2021, in the final days of the 2021 Colorado legislative session.

A week for equity bills

Equity in several forms is a major throughline in Democrats’ bills this year. HB21-1280 received final approval Friday, and requires bond hearings for people in jail within 48 hours. In some judicial districts, people who have not yet been convicted wait behind bars for a week or more before seeing a judge.

The equity line also extends to people in the U.S. without legal permission. Senate Democrats this week gave Polis SB21-131, a bill that prevents state agencies from sharing personal information with U.S. Immigration and Customs Enforcement that could be used against people for immigration violations, expanding on an executive order Polis issued during COVID.

A 2013 Colorado law allowed undocumented immigrants to get driver’s licenses or ID cards and about 150,000 of which have been issued.

“It’s so important,” bill sponsor Democratic Rep. Serena Gonzales-Gutierrez said. “I think it’s a way for us to build trust back in the immigrant community, and especially with vaccine distribution, with health care in general, (and so they can) have trust in the systems.”

Colorado is also likely to become the fifth state in the U.S. to ban derogatory or racist American Indiana mascots. SB21-116 is headed to the governor’s desk after final passage Thursday, and gives public schools about a year to find a new mascot or face a $25,000 per month fine that’ll go toward the state’s education fund.

Commerce City Democratic Rep. Adrienne Benavidez said earlier this week that the mascots — like the Lamar Savages — cause harm to Indigenous kids. “This is a real problem and we need to end it,” Benavidez said.

But Republican Rep. Tim Geitner of Falcon, considers the bill an unfunded mandate because it can cost hundreds of thousands of dollars to change a school mascot (the bill allows schools that need financial assistance to apply for grants).

“This is not about saying someone’s life is less valuable at all,” Geitner said. “This is a matter of saying that we as policymakers have a responsibility to craft good policy.”

Colorado state Rep. Iman Jodeh works at her desk in the at the Capitol in Denver on April 19, 2021.

Colorado has 40,000 people who work in agriculture in some form or another, and Democrats are looking to join six other states by allowing them to get overtime pay. They also want workers to make at least minimum wage and open the door to labor unions. SB21-087 just made it to its second chamber, the House, this week.

What started as a doctor’s push to keep high-potency marijuana products out of teens’ hands has turned into HB21-1317, which departs from the intent of Democratic Rep. Yadira Caraveo’s original idea to cap the potency of marijuana products. However, the bill does focus mostly on wax and shatter, makes it harder for teens to get a medical marijuana card and actually forces the state to track its purchase data.

All that’s left for these weed regulations — the strongest since Colorado spearheaded the legalization movement — is for the House to give a final signoff and send the bill to Polis. There’s little suspense; both chambers have overwhelmingly supported it.

Another bill that saw several compromises between lawmakers, the health industry and the insurance industry is the so-called public option bill (even though that provision was stripped out weeks ago). HB21-1232 mostly now creates a new health insurance plan that’ll be available on the individual and small-group markets as a means to reduce premiums by 15% over three years.

Despite the changes to the bill, which needs only final approval from the House, Democratic sponsor Sen. Kerry Donovan of Vail said she’ll be proud of it “for the rest of my life.”

“I’m already hearing from people about how excited they are about the bill, so that makes me really confident that the bill is going to help my friends and neighbors get access to good health care they can afford,” she said.

Democrats tried to hold a tighter line this year when it comes to climate, too, but this week they said they’d toss aside SB21-200 and instead look to compromise with Polis. They say want to preserve enforcement for emissions reductions for electric, industrial and oil and gas sectors, as well as environmental justice gains.

“From the dawn of time,” Democratic Rep. Dominique Jackson told The Post earlier this week,  “communities of color and low-income communities have been made sick from pollution and have been denied access to health care, and have not been given any sort of a voice or a real seat at the table, so this is a big freaking deal.”

But one of the tradeoffs is losing enforcement of emissions goals for one of the biggest-polluting industries in Colorado — transportation.

Is it always so serious?

Lawmakers also had a little fun this week — starting with relaxing the dress code in both chambers. And senators spent half an hour jokingly haggling over which county should host the state fair.

“There’s a different energy here. Buzz is the word that comes to my mind,” Democratic Rep. David Ortiz said as Friday evening approached. “There’s less of a rhythm. It’s less like a salsa dance and more like listening to jazz right now.”