When is the Best Time to Visit Colorado? 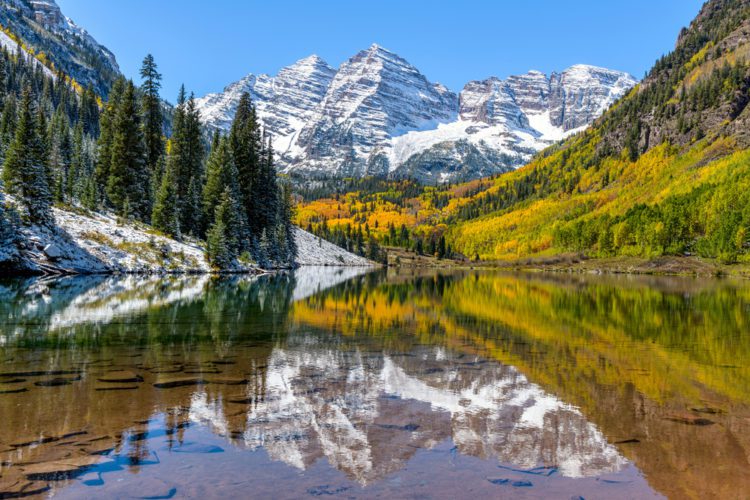 The best time to visit Colorado? Anytime. In a state that covers 380 miles in length and 280 miles in width, there are enough climate variances between the different areas to mean you could be skiing in the morning and sunbathing in the afternoon… providing you have a very fast set of wheels, that is. But presuming you don’t, the best time to go will really depend on which part of the state you intend to visit, and what you intend to do when you get to Colorado. Here, we take a look at exactly what you need to know before heading out.

A Word About the Weather

Before we start getting into the hows and whys of visiting Colorado during certain months, a quick word about its weather. As Tripsavvy.com explains, Colorado is a four-season state that’s known for its hot, dry summers and cold, wet winters. Summer can sometimes see sudden, severe thunderstorms that rage hard but fade fast. Winters can experience heavy snowfall and even the occasional blizzard. Spring and fall tend to be mild, but are hard to predict, with temperatures ranging from highs of 90 to lows of 40 – sometimes on the same day. The main advice when it comes to visiting Colorado is to come prepared – pack layers and don’t be surprised to see some pretty seismic weather changes over the course of your stay, no matter how fleeting it is.

The Best Time For Hiking

As mentioned a little earlier, the optimal time to visit Colorado depends on your priorities. If your priority is to break in your new hiking boots and explore as much of the state’s countryside as possible, consider early fall the best time to schedule your trip. Although you can expect to see some temperature fluctuations, most days, as responsiblevacation.com notes, will be mild, sunny (but not too hot), and relatively dry…. perfect hiking weather, in fact. Just be aware that come late September, areas of high elevation can start to get chilly – in some areas, it’s not unknown for there to be snow. If you’d rather not gamble (and don’t mind feeling a little sun on your back) mid-June through to early September makes a wise choice.

If you’re a thrill-seeker who laughs in the face of danger, Colorado boasts some excellent white water rafting opportunities. Unless you really know what you’re doing (or are too much of an adrenalin junkie to care either way), summer is the best time to organize a visit. By then, the rivers will be tranquil enough not to put up too much of a fight but still exciting enough to be rewarding. If that sounds too tame for your liking, aim for early spring instead. The snowmelt will have filled the rivers by then, guaranteeing a ton of thrills and spills on the water. Best avoided are April, May and late October, all of which can send some very unpredictable weather Colorado’s way.

The Best Time To Hit The Slopes

As thepointsguy.com wisely notes, when most people talk about the “best weather,” they really mean the most temperate. But Colorado is an all-year-round destination, promising as much fun in the snow as it does in the sun. If you intend to spend most of your time on the slopes, winter is the perfect time to head west. Most ski resorts open in late November and shut up shop in early April, but as the start and end of the season can be unpredictable in terms of both the volume and quality of the snow, you’re better off planning your trip mid-season. January can be as cold as ice, but by late February, it should be just about warm enough to escape chilblains while still enjoying excellent snow quality.

The Best Time to Avoid the Crowds

If you don’t really care what you do so long as there’s not a hundred thousand people doing it alongside you, consider April and May and October through Mid-December as your prime Colorado visiting times. The crowds will be thinner and you’re less likely to struggle to find a hotel or camping site with availability. You’ll also avoid the overcrowding on hiking trails and river runs that can sometimes make Colorado’s countryside feel like the center of a city.

The Best Time to Get a Good Deal

If you’re traveling on a shoestring budget, avoid planning your Colorado adventure during the peak season. During summer and winter, resorts, attractions, and hotels tend to inflate their standard rates. There’s a good chance you’ll even end up paying more in airfare. If you’re going for the skiing, visit during the shoulder seasons – the snow might not be quite as good, but the hundred’s you’ll save in accommodation costs should make up for it. If you can take or leave the skiing but still want to check out the mountains, visit during August or September – it’s the cheapest time to visit resorts like Aspen and Vail, and while you won’t get the snow, you’ll still get a hefty dose of quaint charm.

The Best Time For Festivals

If you plan on hitting up some festivals and events during your vacation, January, April, July, September, and October will be the best months to visit. In January, you’ll have the National Western Stock Show to visit, an annual event that draws hundreds of thousands of people from across the US to enjoy two weeks of fun and games, western style. Expect bulls, cattle, and lots and lots of cowboy boots. If you’re a film buff, the Aspen Film Festival in April will be right up your street. Culture vultures should set their SatNav for Cheery Creek and their watches for July, the month when over 300,000 people descend on the city to attend one of the biggest and best culinary and performing arts events in the west. September is Oktoberfest, the perfect time to indulge your weakness for beer, food, dance, and all things German. Last but certainly not least is the annual Great American Beer Festival – held each October, it’s one of the most popular events in the Colorado calendar, boasting more beer than any other festival in the world (over 4000 different varieties, in fact) and a host of fun activities and events. If you plan on attending, make sure to book your tickets early – they sell out faster than you can down a pint.