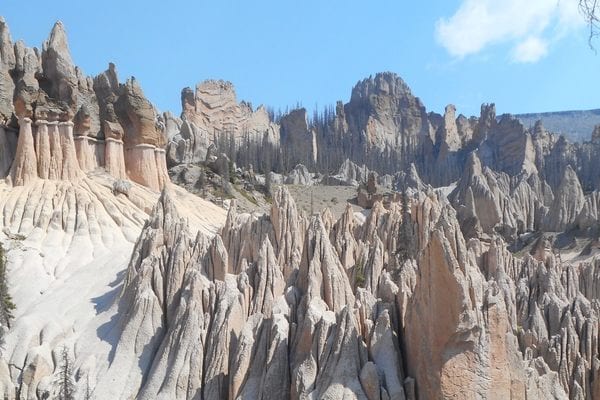 High in the La Garita Wilderness sits a once-popular, but nearly forgotten, otherworldly landscape formed by one of the most massive volcanic explosions in the earth’s history.

Around 25 million years ago, a volcano exploded in the southern Colorado Rockies. It ejected approximately 1,200 cubic miles of material into the atmosphere that covered most of Colorado. The eruption was so massive, that the exact range of the ash fall is still unknown. The tuft, known as Fish Canyon Tuft, has an average depth of about 300 feet. It was formed during a single cooling event which indicates it came from a single explosion.

The caldera that was created is known as the La Garita Caldera and is an oblong crater around 22 by 47 miles long. It’s centered on La Garita mountain. The edges of the caldera weren’t conclusively established by researchers until about 20 years ago.

Eruptions continued in the region for about two million years. Ash and breccia, larger pieces of volcanic material, were layered across the landscape. The Wheeler Geologic Area, named after George M. Wheeler, United States Army Corp of Topographical Engineers. Wheeler conducted extensive studies in the area from 1873 to 1884.

The Wheeler Geologic Area was established as a National Monument in 1908 by Theodore Roosevelt following a glowing detailed description by Frank Spencer, a Forest Service supervisor, and Elwood Bergy, a landowner in Wagon Wheel Gap in 1907. The newly established monument became the second most popular tourist attraction in Colorado after Pike’s Peak shortly after its creation.

However, the popularity of the monument in its earlier years was due to a different attitude towards travel. During the early 1900s, people were willing to spend hours or days to get to remote locations, and often did so by horse. As transportation changed from horse and wagon to automobiles, the difficulty of reaching the monument caused its popularity to fade. The area was soon delisted as a National Monument in 1950.

In 1969, a new road was constructed within 14 miles of the site. In 1993, the entire area was placed under the La Garita Wilderness area with a narrow corridor carved out of the wilderness to create a road. Today, the area can be reached by an eight-mile hike or by a very rough 14-mile, 4-wheel-drive trip. Walking or driving can take similar amounts of time.