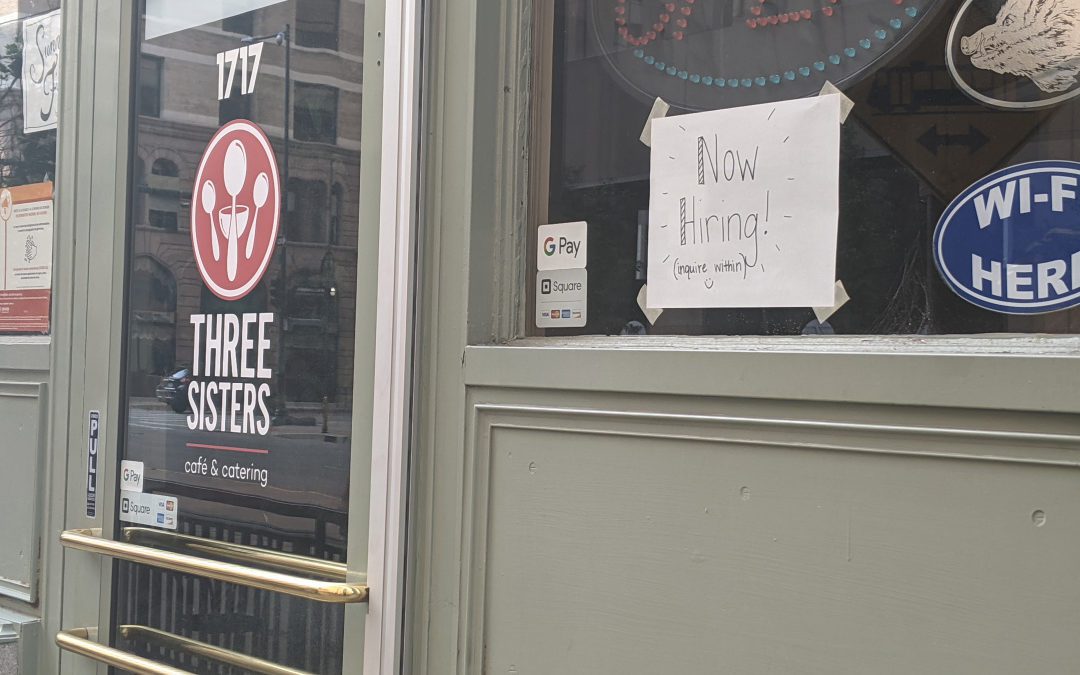 Some don’t want to believe it’s happening, Erin Joy Swank said Friday. She’s one of the moderators of the private Facebook group for unemployed Coloradans that has been tirelessly trying to steer people for more than a year to the answers they seek about unemployment benefits.

“It’s still pretty active,” Swank said. “ We’re hanging in there with really only two of us moderating.”

Swank shares more in another story published Friday. In it, the Colorado Department of Labor and Employment offered updates on the 116,000 people who will lose benefits, including the $300 weekly bonus. Read it at “At least 87,000 Coloradans will lose all pandemic unemployment benefits in two weeks.”

I’ll share more on the state’s unemployment situation in a bit.

Companies continue to share their struggles over finding enough workers and the labor shortage is very real for many. While some blame the federal benefits for causing workers to stay unemployed, Michelle Vacha had another theory: Employees’ work ethic has changed. They demand more because they have a lot of options in today’s labor market.

“We’re afraid to have any kind of corrective conversation because they could just leave,” she said. “(Some employees) just wouldn’t show up for work one day.”

Vacha, the founder and executive director of Community Dental Health in Colorado Springs, said her employees are being lured away by other employers. Only five of the 28 employees from before the pandemic are still on staff. Most positions have been refilled, but she’s had to raise wages “between $5 to $10 higher an hour.” She now pays dental hygienists a minimum of $45 an hour, up from $38 before the pandemic. She still has eight job openings, including for dentists.

Community Dental Health is a nonprofit that provides services to low-income residents in Colorado Springs and Pueblo. The mission-minded approach often was an added incentive attracting workers.

“That’s been a big draw for a lot of the staff that work with us, because we are focused on patient-centered care and not focused on numbers and how much we can turn out,” she said.

But that doesn’t seem to be enough anymore, she said. Other private dental practices are offering hygienists significant raises and bonuses. On Friday, Indeed.com advertised several dental hygienist jobs with sign-on bonuses between $2,000 and $10,000.

“It’s unheard of to even offer a sign-on bonus,” Vacha said. “We can’t compete with that.”

The American Dental Association is reporting a shortage of hygienists, assistants and other dental office workers. A May poll by the organization found that 35.8% of dental practice owners are trying to hire an assistant, 28.8% need a hygienist and 26.5% need administrative staff. The majority said recruitment is extremely challenging.

But what really irks Vacha is that some candidates aren’t even showing up for job interviews.

“At first, we were like, ‘What the heck is going on?’” she said. “We’re in a more professional area so it’s not like fast food or something like that. We would expect at least the courtesy of either ‘I’ve accepted another position’ or ‘I can’t make it to the interview.’ They just don’t reply.”

The state Department of Labor addressed this issue months ago and provided a job-refusal form for employers to fill out if a candidate didn’t show up for an interview or job. The state uses the information to rule on a person’s unemployment benefits.

About 14% to 16% of all incoming job-refusal requests this year resulted in unemployed workers being denied further benefits, according to labor department officials.

Vacha felt better when she heard about this. She had been wondering why people stopped showing up for interviews.

“I was thinking it’s just us, but I’m on dental pages and forums and I guess there’s comfort in numbers. I’m hearing the same stories” she said. “Thank God it’s not just us thinking that we’re not good enough to hire people.”

→ Average earnings for Colorado workers rose $1.33 an hour to $31.84, which is $1.30 higher than the national national average for July, according to the latest business establishment survey by the U.S. Bureau of Labor Statistics. The average workweek for Colorado employees also increased to 33.9 hours in July from 33.2 hours over the past year.

Other companies reached out this week to share their job openings. Sorry if I missed some but email me at tamara@coloradosun.com and please remember to add “What’s Working” somewhere in the subject line. Here’s the round up:

→ Regional Transportation District, or the RTD bus system in the Denver area, offers a starting pay of $20.58 an hour for bus and rail operators, and $26.08 an hour for mechanics. >>

→ DHL, the transportation and logistics company, has 55 job openings in Denver and earlier this year raised hourly wages 24%. Pay starts at $20.50 to $22 per hour for its distribution center near the airport. >>

→ Always on: ConnectingColorado.com, the state’s job board. On Friday, there were 122,170 jobs open.

Besides the countdown to the end of federal unemployment benefits, the Department of Labor notified people on unemployment about two programs that started this week: Multifactor authentication and Mixed Earners Unemployment Compensation, or MEUC.

MEUC isn’t for everyone

Mixed earners were those whose income primarily came from gig work but also had some regular income. By law, they had to use up their regular unemployment benefits first, which often amounted to much less than the Pandemic Unemployment Assistance available to gig workers.

MEUC pays $100 for every week that an eligible worker qualifies for, retroactive to Dec. 27. The program was created as part of the relief plan passed in December. Because of snags in implementing federal payments, MEUC kept getting delayed until now. Payments, however, won’t start until September, after all federal benefits, including MEUC, end.

Details were emailed to everyone this week even though not everyone is eligible. But state officials believe there are probably only about 1,000 people who are eligible.

If you think you’re eligible, look for the “Apply for MEUC” in your MyUI+ account. If it’s not there, you’re not eligible.

For those who are, here are more details provided by CDLE. >>

Unemployment fraud has not abated.

In fact, during a press conference on Friday, Philip Spesshardt, director of the division of unemployment insurance, said that as the MEUC program opened this week, some folks have uploaded fraudulent tax documents. “Anyone who is applying for MEUC and submitting fraudulent tax documents will be investigated for fraud and may be subject to prosecution just like any other type of unemployment insurance fraud,” he said.

Multi-factor authentication, or MFA, is another security measure because, apparently, unemployed workers are still being conned into sharing their login credentials. Fraudsters then log into user accounts and change the bank information so the unemployment payments are routed to the thief’s own account.

With MFA, a user will essentially need two passwords to get into their account. The second one, typically a one-time code, is shared via text, an authenticator app or a different email.

This started on Friday and if you don’t set it up, you may have trouble logging into your account to request a benefit payment, Spesshardt said.

Next week, I’ll dive deeper into Colorado’s employment situation with some updates for workers and employers. As always, share your stories, report any issues you see and have a good week. ~tamara