What’s going on with all the dead birds across Colorado and the Southwest? 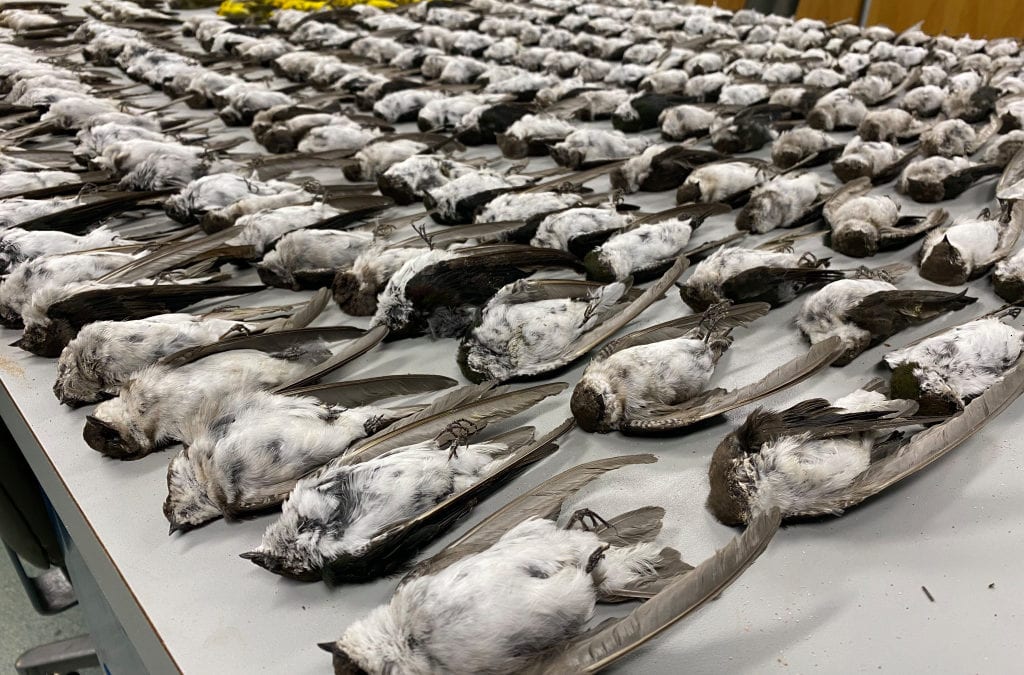 Normally, birds don’t just die in plain sight. But the winged creatures are being found on bike paths and roads, hiking trails and driveways as if they plopped down from the sky.

So what’s going on?

Researchers are scrambling to explain why hundreds of thousands, if not millions, of birds are suddenly being found dead across wide swaths of New Mexico, Colorado, Nebraska, Arizona and Texas in recent weeks — an event that could be one of region’s largest bird die-offs in recent memory.

“Bird die-offs happen, but one doesn’t often see this sort of scale in space and time at all,” said Andrew Farnsworth, a senior research associate at the Cornell University Lab of Ornithology. “It seems unprecedented to me.”

The phenomenon could be due to a confluence of factors, researchers say, including extreme heat and drought throughout the West; plunging temperatures mixed with snow early in the season; and massive wildfires that changed migration patterns or caused birds to inhale too much carbon monoxide.

Regardless of the reason, experts say the sudden deaths could impact bird species that are already seeing precipitous declines in population over the past 50 years as their habitat disappears and climate changes transform the ecosystem.

The first signs of the strange bird deaths came in southern New Mexico last month — before the cold front.

The White Sands Missile Range near Las Cruces normally sees less than a half-dozen migratory bird deaths a week. But earlier this month, workers noticed a couple hundred dead birds around the facility. More reports began to surface around the state — with videos showing dozens of birds strewn across the ground.

The deaths have also popped up in Colorado, with residents from Eagle County to Durango reporting seeing clusters of dead birds lying near reservoirs and bike paths, in front yards and roadways.

Some claim to have seen birds just fall from the sky.

The circumstances surrounding the deaths raised an immediate red flag, said Arvind Panjabi, an avian conservation scientist with the Bird Conservancy of the Rockies in Fort Collins.

“These birds are not crawling into a bush to die. They’re being left exposed where they simply couldn’t take another flap,” Panjabi said. “These are very unusual and conspicuous locations for birds.”

Jason Clay, spokesman for Colorado Parks and Wildlife, said reports have mainly come in the Durango, Gunnison and San Luis Valley area, but that officials have not seen the “catastrophic die-off” that’s been the case in New Mexico.

“We speculate mortalities were more in the dozens than the thousands,” Clay said in an email, adding that they have not gotten calls about dead birds in the metro Denver region.

What started as a strange occurrence in southern New Mexico has turned into a national story, with researchers from across the country weighing in on what could be going on.

For Jenna McCullough, the bird die-off has a relatively simple explanation: the historic cold front that ripped through the Southwest. The extreme weather saw high-90s temperatures across the region plummet to the 30s in a span of just a few hours, bringing snow and near-hurricane winds unusually early in the season from Albuquerque up through Denver and across Nebraska.

After seeing a video posted two weeks ago by an independent journalist showing several dead dozen swallows north of Santa Fe, McCullough, a third-year doctoral student, and a classmate went to check out the phenomenon for themselves.

When she and classmate Nick Vinciguerra arrived, they found 305 dead birds — all of them appearing to have starved.

“These birds were two-thirds the weight of what they should be,” McCullough said. “They were just skin and bones.”

The cold reduces the number of insects, she said, and every one of the dead birds she and Vinciguerra analyzed are insectivores.

“This massive temperature decline affected birds both dying of cold … and also through a lack of food,” McCullough said.

“All have been in very poor body condition, suggesting starvation/exposure,” Fox said in a statement, adding that the birds she analyzed all appeared to have died following the September snowstorm.

National wildlife officials say this type of event is not unprecedented, given the enormous temperature drop. The severe weather disrupted birds’ migration routes, forcing them to fly into areas where water and food were limited, Joe Szuszwalak, spokesman for the U.S. Fish & Wildlife Service, said in a statement.

McCullough agreed, listing several historical early freezes around the world that killed hundreds of thousands of migrating birds. But this die-off also could show how humans have caused substantial environmental changes that could make these events more common, she said.

“Even though these birds died of natural causes, it indirectly can be tied back to climate change,” she said. “It’s so atypical … it’s not some far off thing in 30 years. We’re experiencing it now.”

Anyone who encounters a dead bird is encouraged to submit details to the Southwest Avian Mortality Project.