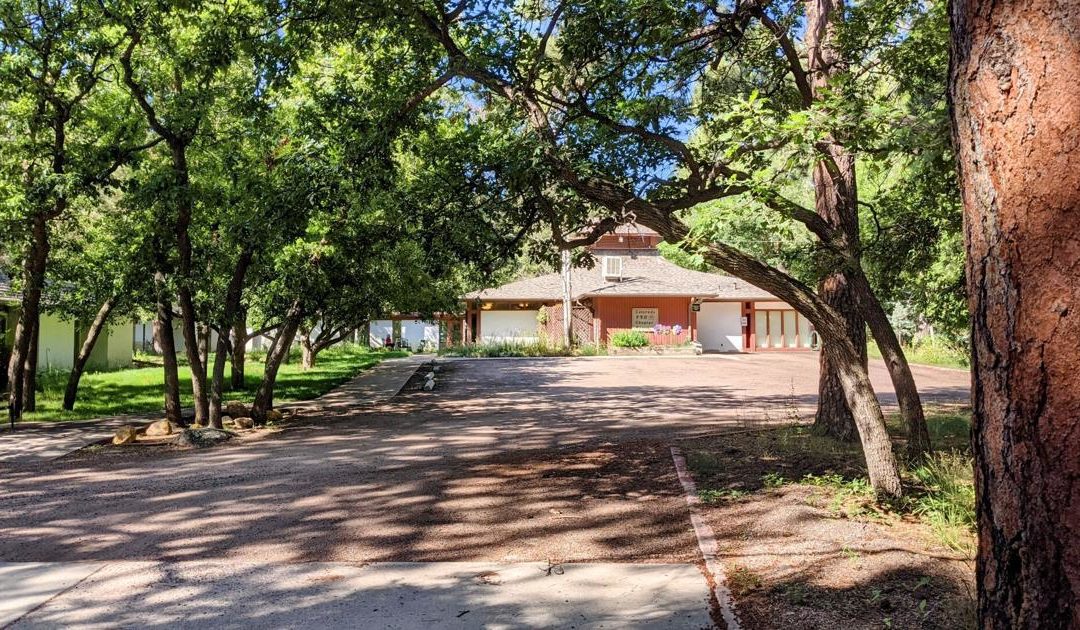 When Cheyenne Cañon neighbors and concerned citizens gathered last week in the Ivywild School gym to discuss the future sale of the historic P.E.O. Chapter House property, the consensus was they want the property preserved and not developed.

The 8-acre P.E.O. Chapter house property, 1819 W. Cheyenne Road, was formerly known as Stratton Park. The property was listed for sale for $2.2 million on July 29 by the Colorado P.E.O. Charitable Organization, which acquired the property from Winfield Scott Stratton’s heirs in 1965.

The P.E.O. is a philanthropic educational organization for women built upon service and philanthropy as an outgrowth of its social bonds of love and friendship; from 1966 until June 2021, the property primarily served as independent living residences for P.E.O. retirees. In June, the Colorado State Chapter of the P.E.O. Sisterhood voted to sell the property due to multiple years of operations losses.

Cheyenne Cañon resident and former El Paso County Commissioner Jim Bensberg organized the meeting to inform neighborhood preservationists about the closing of the P.E.O. Chapter house, the relocation of its elderly residents and the potential sale of the property.

“What we have always known as Stratton Park and is now the P.E.O. Chapter House property ought to be preserved in its present form, as best we can figure out how to do that,” Bensberg said as he opened the meeting.

Next, Cheyenne-area resident Keith Hayes, who grew up on an adjacent property, shared his fond memories and noted the site’s pristine condition.

“I know the P.E.O. has the fiduciary responsibility to get the highest price for the building and the lake,” Hayes said. “However, we all have the responsibility to get its truest and highest use, which is to keep it in its present condition and make sure it is never developed. It truly is one of the last magnificent parcels of natural beauty left in this part of Cheyenne Canon, and everything possible needs to be done to make sure it remains.”

Bensberg highlighted the property’s previous history as Stratton Park, saying he believed Winfield Scott Stratton wanted the property to be deeded to the city of Colorado Springs, but that Stratton died before he could.

The bridge across Cheyenne Creek near the main entrance of the P.E.O. Chapter House, which was a residential home for retired P.E.O. members from 1966 until June 2021 when the Colorado P.E.O. voted to sell the property due to operating losses.

“We all were really excited about it,” Skorman said. “We don’t know how it’s going to work out, because there are so many different possibilities.”

Skorman said one possible partner is the Rocky Mountain Field Institute, which has outgrown its space and needs facilities to house its trail crews.

“If the city does buy it, there’ll be a big public process, like we always do. We’ll go through a master planning process,” Skorman said. “We would hear from the neighbors.”

Several citizens shared their ideas and concerns over the sale of the property, including it being turned into a potential co-housing space or an artist-and-writer’s retreat, and that the property could be placed in a conservation easement with the Palmer Land Conservancy to protect it.

Others shared concerns that potential development of the property would increase traffic on Cheyenne Road, which could pose a danger to wildlife that gather near the creek. Concerns about potential homeless camps and general issues of security were also raised.

About half of the crowd identified as P.E.O. members, and several in attendance said they weren’t aware of the details of the sale, but that they wanted the property to be preserved.

Jim Van Belkum, husband of former P.E.O. board member L.J. Van Belkum, sought to allay the group’s concerns by saying that he believed the P.E.O. Charitable Corporation didn’t want to sell it to a developer. He said they decided to sell the property so they could use their funds for the educational scholarships their organization provides instead of on property maintenance.

“They don’t want necessarily the highest bidder,” Van Belkum said. “They would like the highest purpose as well.”

The property was purchased in 1965 from the Stratton Home Estates trustees for $65,000, according to the P.E.O. Chapter House website, peochapterhouse.org.

“The proposal required the Stratton Home Trustees’ approval of the architectural design for any structure built on the site, that the property not be subdivided, and that the landscape be altered as little as possible,” the website states.

The P.E.O. Sisterhood was founded by seven young women on the campus of Iowa Wesleyan College, Mount Pleasant, Iowa, in January 1869. The Colorado State Chapter was organized on Jan. 23, 1903, in Denver.