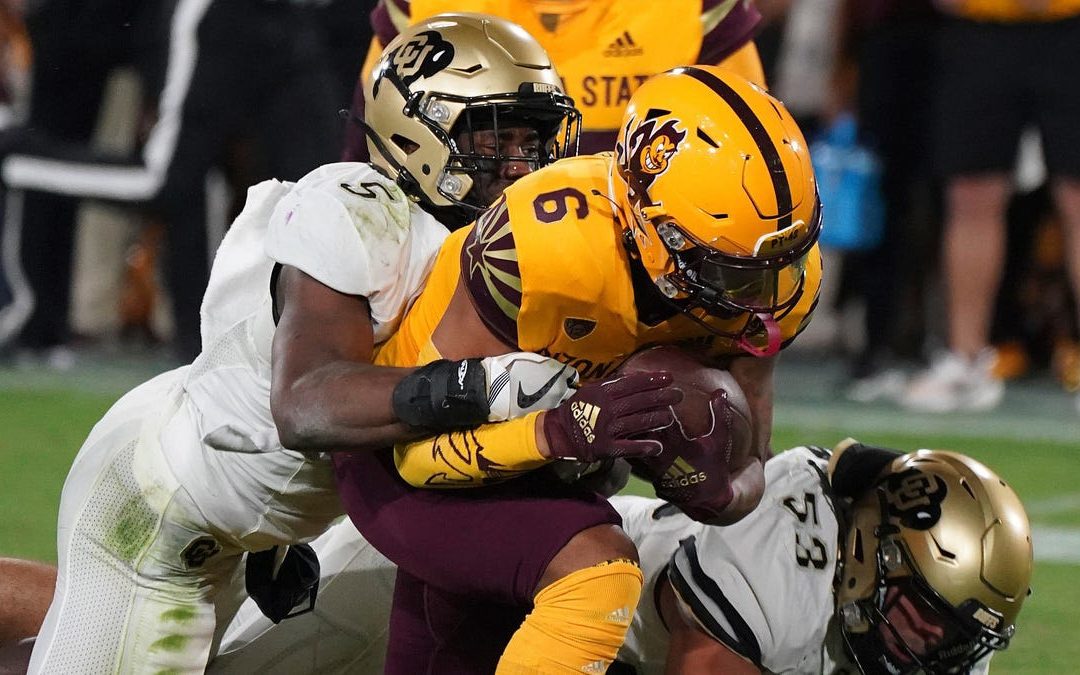 The Arizona State Sun Devils got back on the winning track, surging past visiting Colorado 35-13 Saturday night at Sun Devil Stadium in the Pac-12 opener for both squads.

It marked the first time in head coach Herm Edwards’ four years the Sun Devils have won their conference opener. Last season ASU dropped its first Pac-12 game at USC, while the first game in 2019 was a home loss to Colorado. The 2018 conference slate began with a road loss at Washington.

“There was some kind of consistency with our football team. When you think about how we played, we were pretty good. On third down situations we were good, offensively and defensively as well. In the red zone, we were really good as well. We scored touchdowns in the red zone,” Edwards said. “There were still a couple fouls on some big returns, and special teams hurt us. But for the most part, I think this was a pretty complete game for us from the start to the finish.”

1. The passing game has made progress. The lack of explosive plays in the passing game the past two years has been a source of concern for some with Edwards and offensive coordinator Zak Hill noting that is a place the team needs to get better. The Sun Devils showed their willingness to go downfield more early in last week’s game and made a concerted effort to continue that this week. It was a good week to do so with the Buffaloes not one of the better foes on the schedule and choosing to stack the box against the run. Those type of plays will be needed down the road with bigger foes looming.

“I think this was one of [Daniels’] better nights setting the pocket and surveying the situation,” Edwards said. “This was a good defense. These guys got a good defense. One throw over there on the sideline, we had this double-bench combination and that was big time, that throw is on Sundays. Really nice. I think as he continues to gain confidence with the receivers, he’ll get better. He’s going to have to be. We got eight more Pac-12 games. We got to get that going. We want him to hit some explosive plays in the passing game and we were able to do that. The receivers are starting to hone in with him.”

2. D.J. Taylor is a field flipper. Taylor was a second-team All-Pac-12 selection last year even though ASU played just four games and he returned kicks in only three of those and has proven a threat to go the distance every time he touches the ball. He had a couple of long returns negated by penalties but still had some noteworthy efforts. Last year he returned kickoffs but has been asked to add punt returning to his duties.

“Why they kick to him, I don’t know. I wouldn’t fool around with that guy but I’m glad they do because he’s going to give you the hidden yards,” Edwards said. “We had two of them where they got called back and those were big plays. One of them was a 50-yard play. We were back 50 yards from where the foul was at. When you get across the 50-yard line on the return, you’re playing half the football field. And he’s getting better. He just has a way. When he sees the hole, he attacks it. And all the good returners that I’ve seen at any level when they see air they don’t wiggle, they press the hole and they go fast. That’s what he can do. He can accelerate and he goes fast and before you know it he’s up on you. He has good instincts. When he sees the field, he knows how to cut.”

3. There was improvement in discipline. It couldn’t get much worse than the 16 penalties for 135 yards for which ASU was called for at BYU (and there were three others that were declined). The Sun Devils were called for seven for 90 yards in Saturday’s win, three coming on defense, three on special teams and just one on offense. Edwards says nine is still too many but missing were the penalties that bogged down the offense and only one of the penalties came in the first quarter. Four of the seven were as called against true freshmen.

The Sun Devils racked up 439 yards on 59 plays (a lofty 7.4 yards per play) but for the first time the majority of that yardage came through the air. ASU had a season-high 272 passing yards with QB Jayden Daniels responsible for 236 of that. He connected with eight different receivers, spreading that workload evenly. Rachaad White continued to be a huge factor in the receiving core with five catches for 70 yards, followed by LV Bunkley-Shelton (four for 76) and Johnny Wilson (four for 70), those totals being personal bests for the latter two. ASU managed 167 on the ground but Daniels led the way there with seven carries for 70 yards. The going was tougher for the backs with White held to 37 on 11 runs, but the Buffs chose to stack the box in preparation for what is usually a potent run game, another reason there was more success through the air. ASU was 4-for-4 in red zone scoring chances, all four of those ending in touchdowns. It converted five of 10 third downs, led time of possession 31:05 to 28:55 and had 25 first downs to Colorado’s 18. The offensive line held up, not allowing a sack and there were no turnovers, a marked improvement from last week when the Sun Devils turned it over four times and gave up two sacks. With a few more rushing yards this grade would have been an A.

Antonio Pierce’s defense limited Colorado to 250 yards on 61 plays (an average of 4.1),183 of that on the ground and 67 through the air.  Alex Fontenot was the leading rusher for Colorado with 65 yards on 14 attempts but ASU did a solid job on Jarek Broussard with the reigning Pac-12 Offensive Player of the Year managing only 35 on 12 tries. The 67 yards allowed passing is noteworthy given that Colorado was in the position of having to throw because of the deficit and ASU played some younger players in the back end of the defense. The Sun Devils defensive front was able to put consistent pressure on the passer despite being without some key players, but Colorado missing two starting offensive linemen was a contributing factor, too.  The Buffaloes capitalized on just five of 15 third down tries, as well as their lone fourth down attempt. They had 18 first downs, 10 of those coming via the run. LB Merlin Robertson had his best game of the season by far, finishing with a team-high nine tackles with Darien Butler adding seven with a pass breakup. Kyle Soelle had six with 2.5 tackles for loss and a QB hurry.  A takeaway or two would have raised the grade but it was a stellar showing nonetheless.

Starting with the kicking specialists, true freshman punter Eddie Czaplicki averaged 43.5 on four tries with three downed inside the two and a long of 53 yards that narrowly missed being downed inside the 5 so the Sun Devils punting game didn’t take a step back with the departure of Michael Turk. Cristian Zendejas was 5-for-5 on PATs and did not have a field goal attempt. Logan Tyler handled kickoffs with three touchbacks on six tries. D.J. Taylor was back to handle returns and managed 39 yards on two kickoffs as well as 41 on four punts and those numbers would have been even better had it not been for penalties on two of his run backs. The grade takes hit here because of those penalties. Of the seven penalties ASU was assessed, three came on special teams. The coverage teams did not give up a lot of yardage with Colorado managing just 47 yards on three kickoff returns and 10 on one punt. Colorado’s Cole Becker made two of three field goal tries, missing a 46-yarder that was deflected by ASU’s Jack Jones.

CB Chase Lucas, RB DeaMonte Trayanum, WR Bryan Thompson did not play due to injuries. Those are in addition to DT Jermayne Lole and DE Travez Moore who are out for the season. Timarcus Davis saw action for the first time this season, starting in place of Lucas while true freshman Tommi Hill started in place of Jack Jones who entered in the second quarter. True freshman B.J. Green was ejected for a personal foul that was deemed targeting but because it occurred in the first half he will be able to play next week. With his departure and the other losses up front true freshman Joe Moore saw significant playing time for the first time and recorded two tackles and 1.5 sacks. WR Elijhah Badger scored on a 17-yard run the first time he touched the ball as a Sun Devil. TE Jalin Conyers recorded his first catch, it going for five yards. The ASU participation list had a total of 62 players used.

Thank you for subscribing. This premium content is made possible because of your continued support of local journalism.