What a Piece of Work – We Caught Him Again: Self-Described Colorado ‘Republican’ Matt Crane Caught at Dominion Party with Democrat Leaders and Eric Coomer 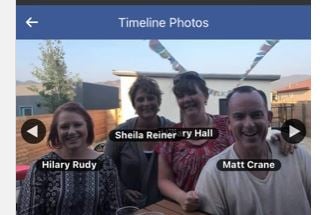 What a piece of work.

The critic of our article on the obvious questionable election results in Colorado neglected to disclose that his wife worked for Sequoia and Dominion Voting Machines for more than a decade.

Today we’ve uncovered that he also failed to mention attending a party with top Democrat schemers and Dominion employees.

We reported on February 12th the suspect and questionable results in Colorado in the 2020 election.

One individual by the name of Matt Crane responded to our post and claimed to be a “strong conservative and very proud republican” in an email to top Republicans.  He challenged our report but never reached out to us.  He did, however, have the gall to reach out to state Republicans and disparage our report.  One of those who received his email provided it to us.   We responded to Crane’s email in another article.

We weren’t really sure why a ‘conservative and very proud republican’ (as Crane referred to himself) would write the email Crane sent out.  We mentioned this in our post and provided in our rebuttal three things never addressed by Crane:

We then discovered that there is more to this Matt Crane individual than he was telling us.  He was the former Clerk and Recorder in Arapahoe County.  We located support for this in various articles, even one report that mentions the woman who took his job:

Arapahoe County Clerk and Recorder Joan Lopez had no elections experience prior to being elected clerk. And it’s showing — frequently — in ways that should make every resident question her ability to fulfill her duties.

The article goes on to mention how the new Clerk and Recorder blocked individuals on Twitter:

Then we uncovered that Ms. Lisa Flanagan-Crane, Matt Crane’s wife, claims on her Linked-In profile that she worked for Sequoia and Dominion:

We also know that Ms. Flanagan-Crane worked with Eric Coomer at Dominion and were both named on the Dominion proposal with Colorado in 2015 that was removed from the Colorado Secretary of State’s site after the 2020 election and before the election was certified.

Today we uncovered more on Mr. Crane’s connections with Dominion and the Democrat Party in Colorado.  A picture of Mr. Crane with a group of Democrat leaders and Dominion employees was unearthed on the Internet.

We do know Matt Crane is not an unbiased “strong conservative and a very proud Republican.”  We know his wife worked for Dominion. We also know that when he wrote about us as “actively trying to mislead people” he was projecting on us what he himself was actively trying to do.  What a piece of work Mr. Crane is.  Shame.