West Division rewind: A look back at the regular season between Colorado Avalanche, Vegas Golden Knights 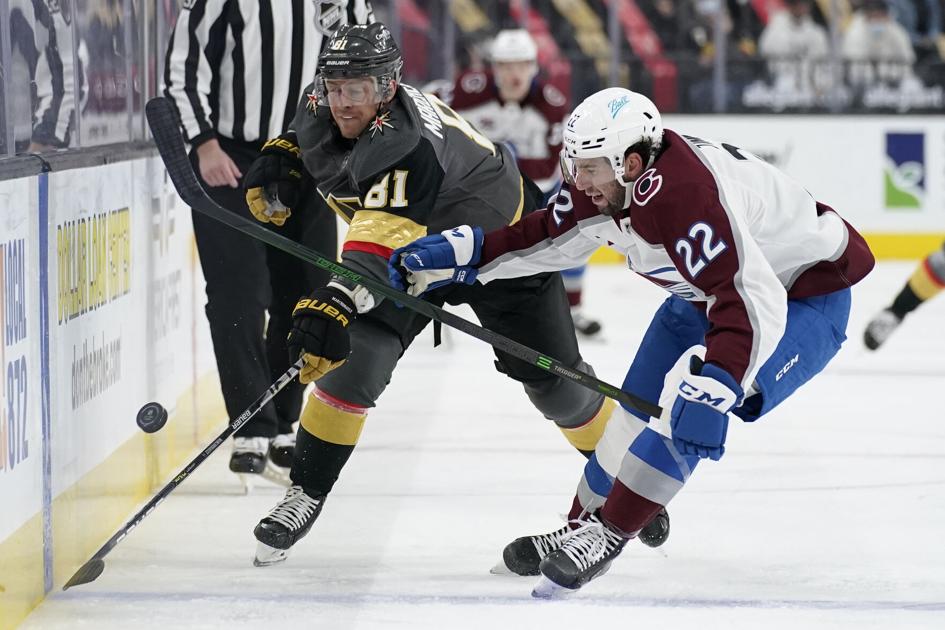 Here’s a look back at the regular-season series between the Vegas Golden Knights and Colorado Avalanche, who meet in Game 1 of the second round Sunday at Ball Arena in Denver. The NHL’s top two finishers — they each had 82 points, but the Avalanche had the tiebreaker in regulation wins — will decide who represents the West Division in the Stanley Cup semifinals.

In their first game back after the first of two COVID-19 shutdowns, the Avalanche couldn’t beat Marc-Andre Fleury at T-Mobile Arena. The Avalanche were still without Gabriel Landeskog, Tyson Jost and Samuel Girard due to protocols. Cale Makar sat out with an injury.

Max Pacioretty scored the game’s only goal off a second-period faceoff and Vegas extended its start to 10-2-1.

Nazem Kadri broke a tie with 41 seconds left in the third period in the rematch at T-Mobile Arena. Nathan MacKinnon and Brandon Saad scored the other goals and Philipp Grubauer made 27 saves.

The postseason is the only place these teams could top the Feb. 20 game at Lake Tahoe as far as memorable outings go.

The game was halted with the Avalanche leading 1-0 after the first period. Unexpectedly bright sun had affected the ice quality, some argued. The game resumed after midnight for East Coast viewers.

“Oh boy,” a mic’d-up Alex Pietrangelo said as Nathan MacKinnon came charging up the side of the ice and eventually scored past him. Devon Toews added the deciding goal and Grubauer made 27 saves.

Vegas evened up the series record by shutting out Colorado on home ice. Alex Tuch scored two goals, William Karlsson had two assists and Fleury posted a 34-save shutout for Vegas

The Golden Knights had killed all nine Avalanche power plays through four games, but Joonas Donskoi ended the run with a game-tying power-play goal at 4:04 of the second period. Colorado went on to score three more times in that period.

During the only regular-season game between the teams to go past regulation, Pacioretty scored at 1:56 of overtime. Toews’ blade broke as he tried to clear the puck. Colorado still extended its point streak to 10 games.

Dan Renouf fought Keegan Kolesar after the latter hit defenseman Bowen Byram high in the previous game. Byram didn’t play again in the regular season or first round of the playoffs.

Devan Dubnyk took a turn between the pipes as the Golden Knights added a 10th straight victory. The Avalanche, missing several players due to COVID protocol again, lost their third straight for the first time in the 2020-21 season. Toews and Ryan Graves scored.

Vegas took a six-point lead on Colorado in the standings with nine games remaining for the eventual Presidents’ Cup winners.

In the tensest game of the regular season — the most consequential would come in the finale, where the L.A. Kings didn’t stand in the way of a win needed a win to clinch the Presidents’ Cup — the Avalanche’s offense struggled.

Alex Newhook assisted on goals from Andre Burakovsky and J.T. Compher and that, along with a 36-safe effort from Grubauer, was enough.