‘We’re On Our Own’: Colorado Gov Blasts Trump For Having No National Strategy To Fight Coronavirus 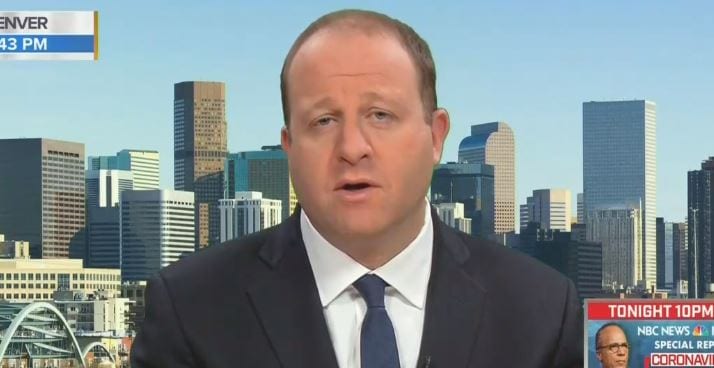 Gov. Jared Polis (D-CO) tore into Donald Trump on Thursday for failing to develop a national strategy to help individual states deal with the coronavirus outbreak sweeping the country.

During an interview with MSNBC’s Chuck Todd, Polis fired back at Trump’s suggestion that governors, not the federal government, should be managing this global health emergency.

“To say the federal government isn’t a shipping clerk, I mean we’re a mighty and proud nation. We’re the wealthiest nation in the world,” the governor said. “That’s what we have the CDC for, and yet, really, we’re on our own as governors.”

Polis’ pushback came after Trump said earlier in the day that it’s up to the governors, not him, to send medical supplies to places that need it.

“Governors are supposed to be doing a lot of this work,” Trump said. “The federal government is not supposed to be out there buying vast amounts of items and then shipping. You know, we’re not a shipping clerk.”

Video of Polis’ response to Trump’s latest attempt to pass the buck:

Colorado Gov. Jared Polis says Donald Trump is basically telling governors that they’re on their own to deal with the coronavirus outbreak. #ctl #p2 pic.twitter.com/FsWGrbrQZY

I think that quote you just quoted from the president there really shows a bit of this gap. To say the federal government isn’t a shipping clerk, I mean we’re a mighty and proud nation. We’re the wealthiest nation in the world. We should have, of course, across our 50 states, that’s what we have the CDC for, and yet, really, we’re on our own as governors. Now, we’re scrappy. I’m doing my best in Colorado. We set up the first in the nation drive-through testing facility. We’re getting additional masks in from Home Depot and others. We’ve worked with most of our grocery stores to provide shopping for seniors and vulnerable populations in the morning. And we’re doing everything we can. But you know what, Chuck, we have freedom of movement in this country and until we have a national strategy, people are going to come and go from Washington and California and Colorado and Texas, and until you do this in a cohesive way, you’re going to have a lot more trouble containing the spread of the virus.

When Trump said last week that he takes no responsibility for this crisis or his administration’s god-awful response to it, the American people should have believed him.

After all, this is a man who has never taken responsibility for any of his mountain of failures, whether they took place during his business career or his time in the White House.

The truth is that Trump’s actions – regardless of his ever-changing tone – continue to fall well short of what is needed to meet this crisis. Not to mention the fact that he is largely the reason why the United States was so ill-prepared to handle this outbreak.

The president can and will likely continue to put this on state officials, but the American people understand that this is an emergency that goes beyond on any single state. In order to combat the spread of the coronavirus, a national strategy is necessary.

So far, Donald Trump has been unable or unwilling to develop one.