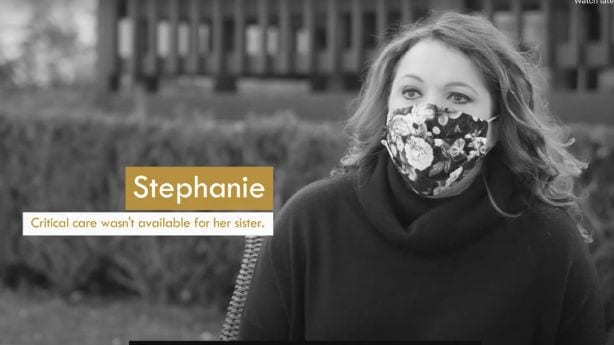 SALT LAKE CITY — Stephanie Deer watched in horror as a doctor tearfully told her they were unable to help her sister who had suffered a heart attack.

With 206 COVID-19 patients hospitalized statewide at the time, the doctor said they were unable to give her sister the timely care she needed. It was three hours before the 47-year-old was admitted to a critical care unit.

“My sister did not have COVID and her death, in large part, was caused by COVID,” Deer said Thursday. “And she didn’t have the infection.

“When a doctor looks you in the face and they’re in tears telling you that they can’t get critical care for your family member — I feel like people need to know that,” she added. “I don’t want anyone to go through what my family’s going through — what (my sister’s) 9-year-old son is going through.”

Deer’s story is just one of many involved in a new informational COVID-19 campaign launched this week by Salt Lake County in an effort to educate the community on the serious impact the virus has had on people in the area.

About 10% of the budget is being used to make materials dedicated specifically to Salt Lake’s Spanish-speaking communities. Advertisements will be put on buses, billboards and stories will run on the radio as well.

“We are not trying to scare anyone here, but we want people to understand the gravity of the situation,” spokesperson Nicholas Rupp said at a Thursday news conference announcing the campaign. “If someone needs hospital care they need to seek it out. Hopefully, it will be available. Hopefully, everyone will be doing their part enough that our hospital system can handle the surge.”

As of Thursday, there were 468 people currently hospitalized with COVID-19 as the state reported a record-breaking single-day increase of 3,919 new cases.

New guidelines went into effect Monday, implementing a statewide mask mandate indefinitely and asking residents to only gather with those inside their households for two weeks. The rules are largely unenforceable and rely heavily on an honor standard that asks Utahns to obey the mandates as a social responsibility.

While Deer appreciates the steps Herbert has taken, listening to others consistently find ways and justifications around the rules leads her to believe more action needs to be taken.

“With those restrictions, there still seems to be qualifiers and I feel like that sends a mixed message and people try to look for loopholes in those mandates, and they may not be as cautious as they need to be right now,” Deer said. “They might not understand how vulnerable they are. So I’d like to see them do more, but I appreciate that something is being done.”

Another voice of the campaign is Lisa O’Brien, founder of the local long-hauler support Facebook group for Utahns experiencing lasting physical impacts of their bout with COVID-19.

“We don’t know if we ever go back to who we used to be,” she added.

The county’s public information campaign was born partly out of frustration as community leaders continue to fight misinformation surrounding the seriousness of the pandemic.

“Our staff are tired. Health care workers throughout this community are tired, and this is just a heartbreaking time to live, and we still have work ahead,” said Mayor Jenny Wilson at a Thursday news conference.

At Tuesday’s Salt Lake County Council meeting a defeated Gary Edwards, executive director of the county health department, said he simply did not understand how people don’t believe the numbers.

Others at the meeting agreed, with councilwoman Aimee Winder Newton saying her Facebook post in support of Gov. Gary Herbert’s new mandates had received multiple comments from people upset with her — so-called pandemic-deniers.

While the mayor admits she has been wrong in the past, saying things like the worst is behind us and things will be better by the end of the year, she recognizes her mistake and is committed to doing better going forward.

Saving lives is as simple as wearing a mask and staying home to slow the spread, Deer said.

“She should be here,” Deer said of her sister. “She would’ve survived if she could’ve gotten care sooner.”

It’s not easy to miss out on activities in the short term, but the long-term alternative is so much worse, she added.

“I know it’s hard for all of us. But trust me, it’s easier than what I’m going through and I don’t want anyone to go through that,” she said. “Please do your part and wear a mask.”