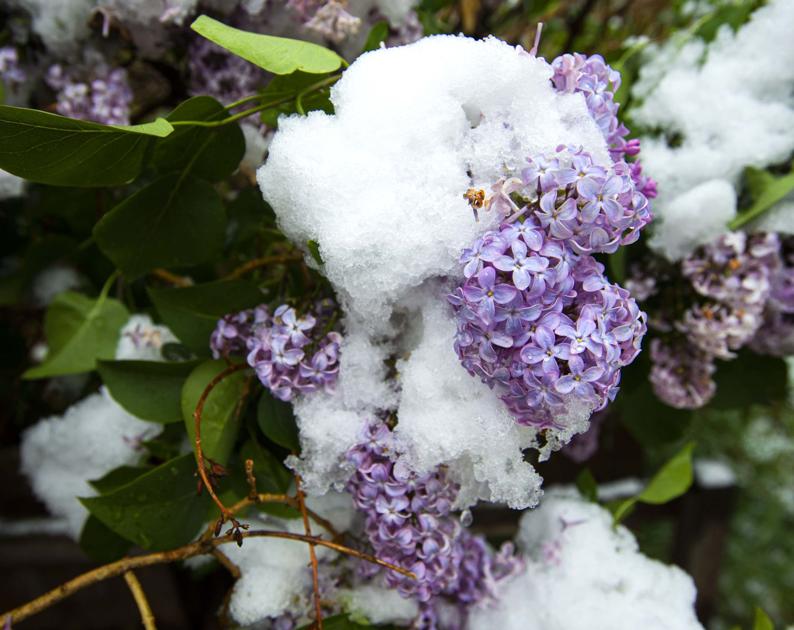 A winter storm warning is in effect Tuesday through Wednesday midday in Colorado Springs.

Meteorologists warn residents of anticipated heavy snow in northern El Paso, Teller, Fremont and other surrounding counties, where 4 to 14 inches of snow is forecast. Wind gusts could reach as high as 55 mph, the warning said. Click here to read the National Weather Service’s weather alert.

Traffic on Colorado 67 South in Teller County, northeast of Cripple Creek, is being diverted to County Road 81 due to a traffic crash, the county’s Sheriff’s Office spokesman Cdr. Greg Couch tweeted.

All traffic on HWY 67 South is being diverted to County Road 81 due to traffic accident. Please use extreme caution due to road conditions

Westbound I-70 at mile marker 228 in Georgetown is reopened, according to the Colorado Department of Transportation. Chain and traction laws are in place.

Snow is falling in southern Colorado Springs, according to news reports.

Been waiting all day for the #snow. Finally have it on the west side of Colorado Springs. ⁦@csgazette⁩ #cowx pic.twitter.com/PsdxkOTMeY

The commercial vehicle chain law is in place on eastbound I-70 between Silverthorne and Eisenhower Tunnel (between mile markers 205 and 215), according to Colorado Department of Transportation.

Passenger and commercial vehicle traction laws are in place on I-70 between Bakerville and Silverthorne (between mile markers 205 and 221) and over Loveland Pass, according to Colorado State Patrol.

The passenger vehicle traction law is in place on eastbound and westbound I-70 between Vail and Vail Pass (mile markers 178 and 195).

The commercial vehicle chain law is in place on eastbound and westbound I-70 between Vail and Vail Pass Summit.

I-70 westbound is closed at mile marker 228 in Georgetown.

The passenger vehicle traction law is in place on eastbound and westbound I-70 between Silverthorne and just west of Silver Plume (between mile markers 205 and 221), according to the Colorado Department of Transportation.

The commercial vehicle chain law is in place on westbound I-70 between mile marker 221, four miles west of Silver Plume, and Eisenhower Tunnel at mile marker 215.

Monarch Pass, U.S. 50, is closed in all directions for safety precautions during Tuesday’s storm. The closure is between mile markers 190 and 210, according to Colorado Department of Transportation. There is no estimated time for reopening.

A mix of rain and snow is falling in Monument, according to news reports.

The passenger vehicle traction law is in place between County Road 4 and Riverpark Dr. over Hoosier Pass. Passenger vehicles are required to have snow or mud/snow tires, use chains/alternative traction devices, or be a 4WD/AWD vehicle.

U.S. Highway 40 eastbound and westbound is closed between Berthoud Pass and Empire.

A winter weather advisory is in effect Tuesday through Wednesday midday in Colorado Springs as snow is predicted to accumulate between 3 to 7 inches with poor visibility and wind gusts up to 45 mph, according to the National Weather Service in Pueblo.

Tuesday temperatures are expected to reach 37 degrees and drop to 27 degrees overnight. Rain is forecast to become snow after 4 p.m. with a 90% chance of precipitation and wind gusts up to 25 mph.

Overnight the bulk of snow accumulation is expected. Winds will pick up to around 40 mph with a 100% chance of precipitation.

Drivers should watch out for slippery road conditions as well as fallen tree branches, which are likely as leafed tree branches could break under the weight of snow accumulation.

A freeze warning was also issued to alert farmers and gardeners that temperatures will drop below 32 degrees — likely to kill crops and other vegetation unprepared for frost.

Winter weather conditions this early in the year are quite rare according to meteorologist Klint Skelly, who said the earliest snow on record in Colorado Springs on Sept. 3, 1961.

Mountain areas, including ski resorts, could see more than a foot of snow — jump starting the build up of snow pack for eager skiers and snowboarders.

A turn of seasons

After a long holiday weekend unofficially capping off a hot, dry summer, Colorado Springs residents should be prepared to greet winter Tuesday.

Snow is predicted to clear the air of wildfire haze and smell from the Cameron Peak fire in northern Colorado and blazes burning outside the state. But the storm will bring with it high winds, low temperatures and slick roads.

The precipitation is predicted to start as rain and then turn to snow during the day as temperatures plummet. The high Tuesday is predicted to be 36 degrees, a precipitous drop from the record-setting high of 97 Sunday.

Warm ground temperatures make it difficult to predict how much snow could accumulate, but up to 5 inches could fall in town Tuesday and Wednesday, said Pamela Evenson, a meteorologist with the National Weather Service in Pueblo.

“It is difficult to say how much you might see sitting on the ground at one time,” she said.

Those who live near Monument Hill could see 6 to 9 inches of snow and Teller County residents could get up to a foot, she said.

Other mountainous areas of the state could receive more than a foot of snow from the cold front moving down from Canada, she said. Monarch Pass west of Salida is predicted to get 12 to 18 inches and the eastern San Juan Mountains in southwest Colorado could see 2 feet of snow, Evenson said.

The predicted low temperature of 27 degrees Tuesday night could damage crops and outdoor plumbing, according to the National Weather Service.

High winds are also possible with gusts up to 35 mph during the day Tuesday.

The National Weather Service has issued a winter weather advisory from 9 a.m. Tuesday to noon Wednesday for Colorado Springs and southern El Paso County, warning of slippery roads and tree damage from the high winds.

Wet weather could linger through Thursday.

Warmer temperatures and sunny skies are likely to return Friday. The high Friday is predicted to be in the upper 60s and the high Saturday is likely to be in the 70s, Evenson said.