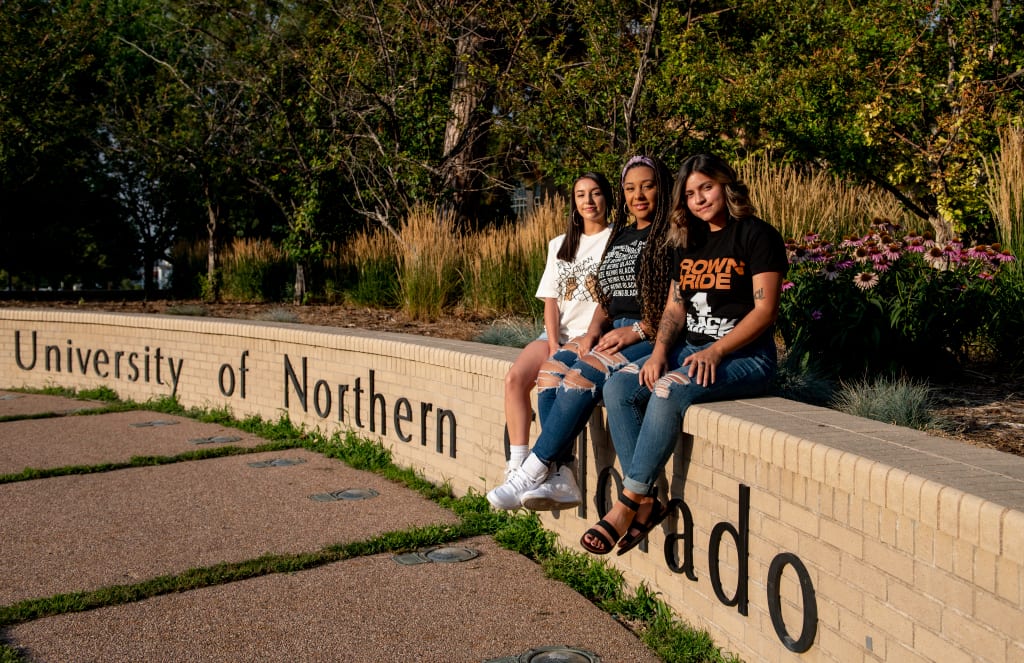 When Brenda Vargas arrived at the University of Northern Colorado in 2018, she said it was the first time in her life she met other people interested in racial equality.

Vargas, a UNC junior, was raised on the north side of Denver in what she described as a traditional Mexican home with politically aware parents from Mexico City. As a first-generation American, Vargas experienced inequalities in her educational experience.

“I was often placed in ESL (English as a Second Language) programs even though I was fluent in English because of my last name and what I looked like,” said Vargas, who is majoring in Mexican-American studies.

Vargas, 20, and two UNC classmates, Leslee Dominguez and Katilla Osindero , spent part of their summers raising awareness of social justice and equality for people of color. Dominguez, 20, is also of Mexican-American descent. Osindero, 19, is Black.

As protests and marches grew in numbers nationwide in the aftermath of George Floyd’s death in Minnesota, the young women jumped in to join Black Lives Matter events in Greeley. The local events focused on justice for Floyd, Elijah McClain, of Aurora, and Breonna Taylor — all Black Americans who died at the hands of law enforcement — but the UNC women didn’t hesitate to interject their concern for women’s places in the equality movement.

“We’re teaching future generations that it’s OK to be loud and proud and to fight and not expect people to do it for us,” Vargas said. “For us, being women and doing this, it’s empowering young women to do the same. Men can talk about equality all they want, and if it doesn’t include women then it’s not really real.”

Among the other key players behind the creation of the Greeley summer protests was UNC senior Josh Greer, president of the university’s Black Student Union . Greer worked with Dominguez, Osindero and Vargas in planning and organizing the protests and marches in June and July. He also knew the women from campus life and taking an active role in student minority groups.

Greer said the women’s roles in the summer events was crucial for diversity; women’s work in the fight for equality often gets lost in the scuffle.

“It’s Martin Luther King Jr., when you look at significant events, it’s always men of color,” Greer said. “I feel it’s important for young people to have these (women’s) voices in these movements.”

The women all fully realized their interest in equal rights when they arrived at UNC in 2018. Their paths crossed at the university through mutual friends and a shared interest in diversity and equality. All three women were involved this summer with the formation and organization of the Black and Brown Alliance , a group of UNC students and Greeley residents promoting the solidarity between the Black and Latinx communities.

Dominguez, a 20-year-old junior from Colorado Springs, said one of the reasons she chose to attend UNC was for its diversity. Forty-four percent of the student body is minorities or people of color, according to a statistic on . Dominguez attended Falcon High School, a school she said was predominately white. Students there didn’t show support for issues of interest to minorities.

One of those issues for Dominguez is more and better education in schools — from elementary level to college — with funding for curriculum covering African and Mexican-American history.

At UNC, Dominguez said she’s found friends and encountered peers from different walks of life. These interactions helped her find her own voice. She’s a double major in psychology and criminal justice and she has an interest in counseling or immigration law.

“Black and brown people have been in this country for generations,” Dominguez said. “Their history is not taught in high schools. My end game is we’re treated with respect that we deserve. We belong here. We were born here and we want to be treated equally with everyone else.”

Osindero came to UNC from Aurora, and she’s studying chemistry with an eye on attending medical school. For her first two years on campus, Osindero worked for Talia Carroll, the former director of the Marcus Garvey Cultural Center . The center opened in 1983 as the first Black cultural center on a university campus in Colorado.

As Vargas derived inspiration to join a movement from a Mexican-American Studies professor, Osindero, found a female role model and inspiration in Carroll.

“She has such a powerful voice,” Osindero said of Carroll. “But she never came across to me as scary or unapproachable. She got her point across. I feel people are threatened by Black women with strong voices.”

Osindero said she thinks the Greeley events made an impact on the community at large, though admitted there remains a long way to go. Osindero said for Black Lives Matter or any movement chasing equality to click, it requires systemic community support and recognition with conversations at government meetings and in education.

Though Osindero is a young woman, she said she owes it to the Black community to speak and participate.

“I feel a duty as a Black person to stand up for the Black community,” Osindero said. “I feel like it would be doing a disservice to my people if I have platform with an education and I don’t speak up. A lot of people have ideas and things to say and no one o say it to.”