“We have just hit a wall”: Black Colorado lawmakers describe racism at the Capitol, call for end of white silence 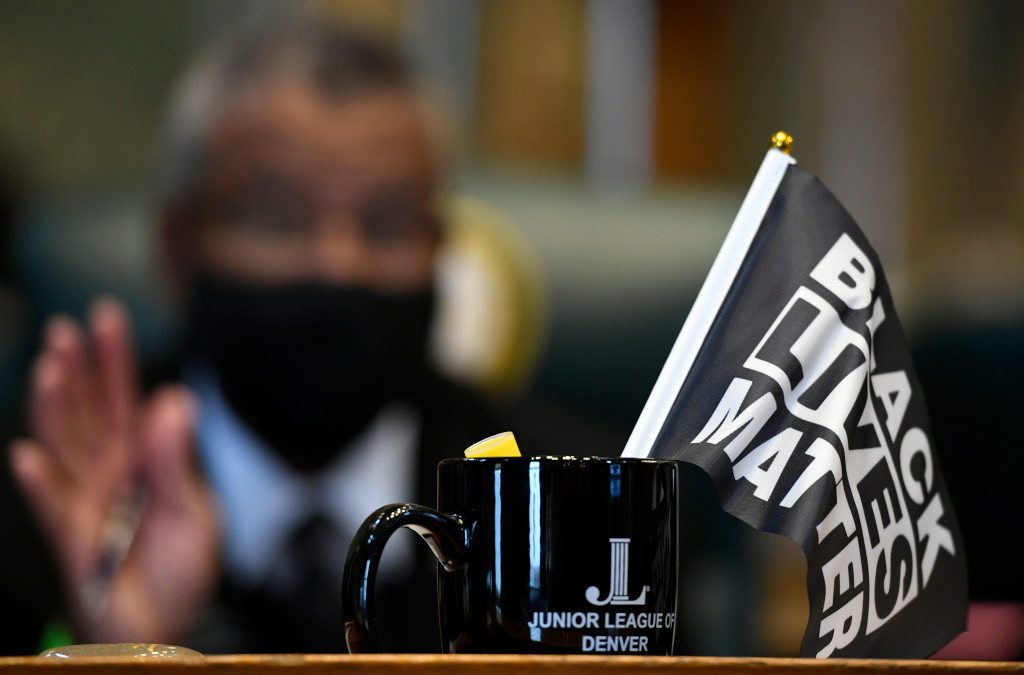 A familiar feeling of hurt and exhaustion sank in for Black lawmakers last week when state GOP Rep. Ron Hanks made a joke about lynching on the Colorado House floor before launching into a defense of the three-fifths compromise of 1787, which counted Black slaves in the U.S. as less than whole people.

Hanks, who is from rural Penrose, was mistaken for GOP Rep. Mike Lynch last Thursday during debate over a civics education bill.

“Being called Mr. Lynch might be a good thing for what I’m about to say. No, just kidding,” Hanks said, then described the three-fifths compromise as “not impugning anybody’s humanity” but rather being a product of political negotiation. After being hissed at by Democrats, Hanks said he was surprised anyone could see his comments as controversial.

Black legislators in the Colorado Capitol are used to hearing ahistorical remarks and experiencing racism both overt and subtle. They say they generally try to keep calm and take these things in stride, but in an interview with The Denver Post on Monday, the nine members of the legislature’s Black Democratic Legislative Caucus (there are no Black Republicans in the legislature) said they’re done being quiet.

They also called for an end to white silence, and for more support from both sides of the aisle.

“What we’re facing, we’ve been facing the same thing our entire lives. That’s why we’re exhausted,” said Aurora Democrat Sen. Janet Buckner, who was presiding over the House during a Martin Luther King Jr. tribute in 2019 when then-Dacono GOP Rep. Lori Saine falsely claimed that white people were lynched about as often as Black people in the United States.

“There’s not that one incident that brings us to this,” she said. “We have just hit a wall.”

“We’ve been attacked in committees, literally people standing up, coming up to us, hovering over us,” said Rep. Leslie Herod, a Denver Democrat who chairs the Black caucus.

Aurora Democratic Rep. Naquetta Ricks said that soon after the mass shooting in Boulder last month, she rode in an elevator with GOP Rep. Richard Holtorf, the Republican from Akron who is frequently chastised on House floor for violating chamber rules of decorum.

“He starts talking about Black-on-Black crime. I’m like, ‘Where are you going with this?’ But they kind of try to bait you like that,” Ricks said, adding that she thinks he intentionally spoke this way because he was in the presence of a Black colleague.

Holtorf said “it’s a two-way street, and the Black caucus could temper their remarks” as well. He cited a recent exchange on the House floor following the Atlanta shootings, which began with Herod condemning white supremacy and resulted in Republican Rep. Rod Bockenfeld of Watkins, who is white, shouting “I didn’t ask for this color!”

“We’re Americans first. We have to start with that premise,” he said. “We can’t continue to politically divide and racially divide ourselves.”

“I in college had a friend who was an African American and he was a homosexual, and we were good buddies,” Holtorf added.

Hanks declined to be interviewed about his lynching joke and remarks about the three-fifths compromise, adding, “I’ll respond in my own articles and just let them (Black lawmakers) have their fun.”

Hugh McKean leads the House GOP caucus. The Loveland Republican told The Post he welcomes and encourages all perspectives. The lectern of the House, he said in a statement, “is the exact place where we can have uncomfortable discussions, about policy, about views and about the path forward in Colorado.”

He also said he told Denver Democratic Rep. Jennifer Bacon — a Black Caucus member to whom Hanks was responding during last week’s comments — he wants to “keep lines of communication open, in the interest of understanding one another.”

“Certainly for myself and for most of my colleagues on this side of the aisle, we’re absolutely aware that our experience is different than somebody from the Latino or Black caucus, and I’d be willing to have those conversations, and I would want to have those conversations, one-on-one, if there’s a way that my behavior or the behavior of my colleagues is inadvertently offensive or can be better,” he said.

But Bacon said discussing issues of race is often difficult because of a common misunderstanding about the basics of systemic racism and who it affects.

“People have said to me they’ve never experienced white privilege, multiple people. And the reason is, they’ve also never been sat down, or, because of their privilege, been made to understand what it means when we say it,” she said. “If you are an ally, you will believe people and their experiences, and not question it.”

Black caucus member Sen. James Coleman of Denver said he believes his own lived experiences are often discounted by his colleagues.

“We tell our truths and people become offended. Someone else shares their truth, we’re expected to sit quietly and listen. When we speak up and defend ourselves, we’re called angry,” he said. “And in the midst of all this, we have a responsibility not only to our districts, but every Black person in the state to pass good policy that’s going to impact their lives. So what we do is we put our heads down.”

He and several other Black caucus members said having to deal with these issues is a constant distraction from the work they were elected to do. They’d rather be interviewed about housing, immigration and other policy matters, they said.

“But we can’t. And it is because we are not white enough,” said Iman Jodeh, an Aurora Democrat who is a Palestinian-American Muslim and caucuses with Black lawmakers.

Black caucus members also called on their colleagues to help them combat ahistorical remarks or to speak out about racism. Latina Democratic Rep. Serena Gonzales-Gutierrez said she will have “one-off conversations” with individual members about race, but they often don’t go anywhere.

For example, when Latino members have requested their colleagues not use terms like “illegal” when referring to undocumented immigrants, or “Chinese math” when “difficult math” could be used, Gonzales-Gutierrez said they get accused of being too sensitive.

Gonzales-Gutierrez, who is the assistant House majority leader, also believes it may be more effective for the members who make the derogatory remarks to hear from other white people.

The most powerful white person in the House is Speaker Alec Garnett, who told The Post in a statement that he quickly phoned his Black caucus colleagues after Hanks’ comments last week.

“I reiterated my solidarity with them and vowed to work to bring about change,” the Denver Democrat said, adding later that said change includes “looking at how chairs can more conscientiously use the gavel to steer discussions away from discriminatory and racist remarks.

“Further,” Garnett said, “I’m going to continue having conversations with members about a more holistic approach to ensure that we always embody the values that Coloradans expect from their elected leaders.”