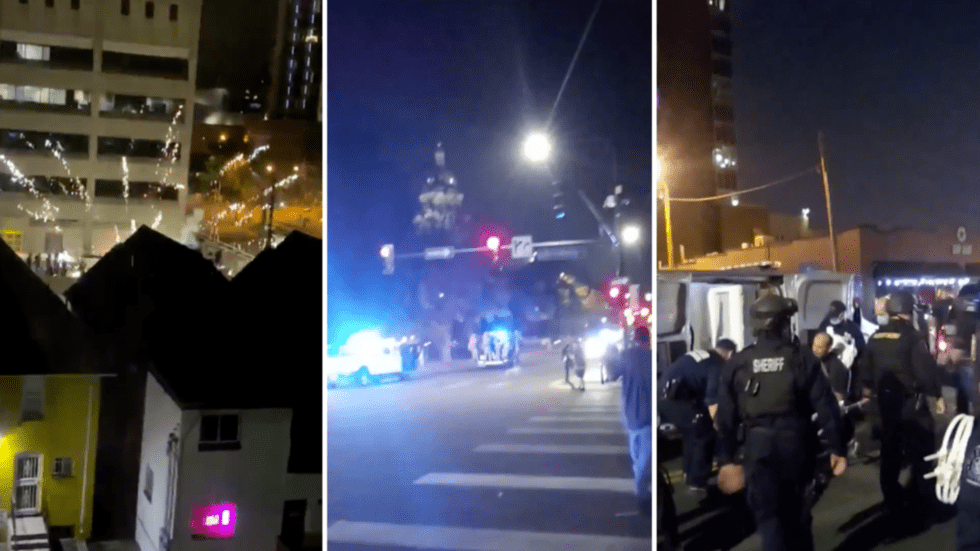 Dozens of anti-police protesters have been swarming around downtown Denver, Colorado, setting fires and smashing windows, with authorities seemingly struggling to contain the hit-and-run violence.

Agitators are now trying to rip down a fence surrounding the state Capitol building @KDVR pic.twitter.com/XbHlOkes0q

Police roll up on protesters as they try to take down fences at the capitol #denverprotest #DefundThePolice pic.twitter.com/p9iJweV8Eo

Police conducted eight arrests as smaller groups of rioters have been running rampant, apparently using guerilla tactics and largely avoiding direct clashes, but throwing fireworks and other projectiles at the officers.

Downtown Denver is going stupid with the protest, they throwing fireworks at the police pic.twitter.com/ABUtO9grHU

Police put out another fire set in the middle of the road. The backdrop is the Denver city county building. The group breaking windows and setting fires is about 100 people. They’re moving throughout the city without any regard for the law #9News pic.twitter.com/dnhb9ANSFf

The chaos follows a public call to ‘Give ‘Em Hell’ shared on social media over the past week, urging “action and demonstration in the wake of the city council’s decision to deprive the people of Denver the right to shape their community and vote to abolish the police.”

A tree is on fire outside the courthouse. People are throwing rocks at a Sheriff’s Office van. Important to note, nearly all of the protesters have shields or helmets. Most are dressed in all black #9News pic.twitter.com/xojCHYDVmX

Someone with a hand axe broke a window at a building across from DPD headquarters. A resident who says she lives in the building came down and yelled at them to stop. “This is not productive” #9News pic.twitter.com/ErgOZttBFT