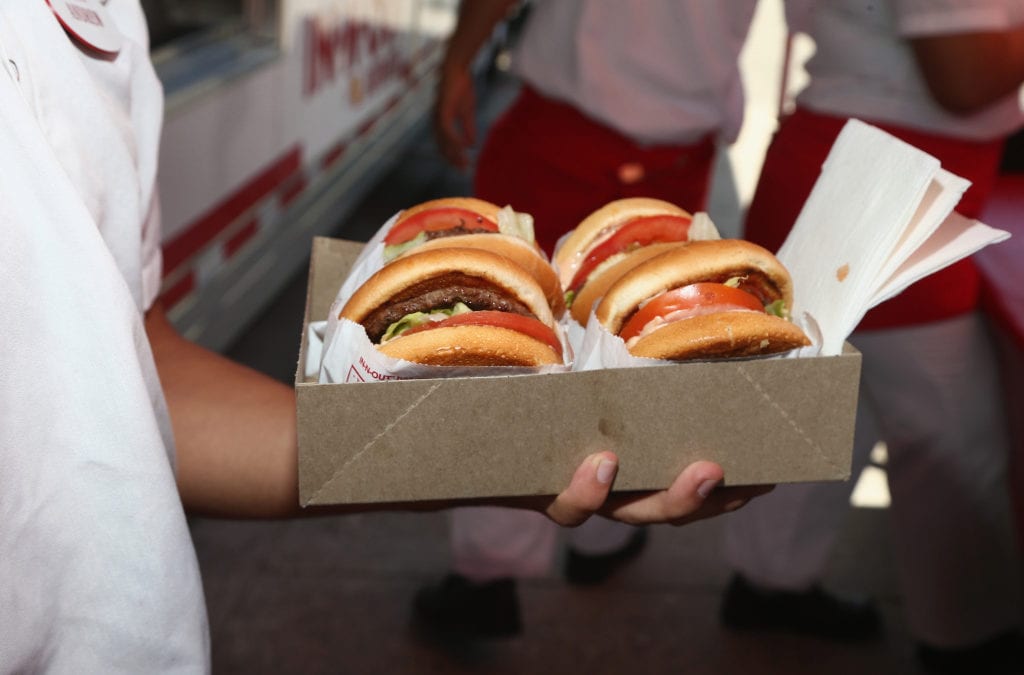 People waiting in line Friday to gobble down In-N-Out Burger fare had better packed a lunch or dinner, the wait time at the newly opened location in Aurora was 14 hours, according to police.

IN-n-Out burger is now at a TWELVE HOUR WAIT. I repeat TWELVE HOURS. Traffic is still significantly impacted in the area surrounding the mall. They will close before you get to the window most likely. Meanwhile many other local eateries do not have a wait hint hint.

An extremely long line of vehicles snaked into the new eatery throughout the day, where six moonlighting Aurora police officers were keeping a collective eye on the crowd and the traffic.

“There’s been absolutely no problems,” said Crystal McCoy, a police spokeswoman. “We haven’t had any issues at all.”

The popular California-based burger chain opened two new stores in Colorado, 14150 Alameda Ave., Town Center at Aurora, and at 1840 Democracy Point, Colorado Springs. The stores’ drive-thrus opened at 10 a.m. and food was also available to go, but there was no indoor dining.

Aurora police and burger officials had met earlier and came up with a traffic plan anticipating massive crowds, McCoy said.

“It was tweaked a little bit, mitigating traffic, snaking the line and doing whatever they could do to condense people and get them out of the roadway,” McCoy said.

At about 4 p.m., the vehicle line was estimated to be about two-miles long, wrapping around the mall property twice, McCoy said.

In-N-Out expected to sell about 60,000 burgers over the weekend at the Aurora store, burger chain officials told police.

The astoundingly long lines Friday were reminiscent of the lines that formed for Colorado’s first Krispy Kreme doughnut shop when it opened near Park Meadows Mall in March of 2001. At that time, more than a thousand people stood in lines to bite into hot, fresh doughnuts. Bus loads of doughnut aficionados descended on the shop.

On Friday, the Aurora Police Department Twitter feed, keeping track of the burger phenomenon,  exploded with mind-boggling traffic as well.

At about 3:30 p.m. the department’s Tweet, and it’s thread, on the In-N-Out situation hit an impressive one million impressions, McCoy said. There were over 3,000 retweets and 2,000 likes. The burger joint planned to be open until 1 a.m.

“It’s just one of those things,” McCoy said of the opening day development. “It’s fun when you have to travel to get it, but being able to get it everyday, I don’t know if they’ll be that enthusiastic about it” in weeks to come.