Virus may have been in Colorado more than 2 weeks before 1st case reported, state data shows 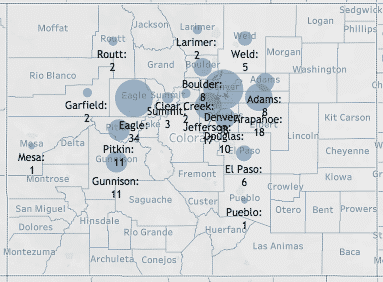 The new coronavirus may have been in the Colorado more than two weeks before Gov. Jared Polis announced the first case on March 5, according to data released by state health officials.

State officials on Tuesday launched a new website dedicated to information about COVID-19 in Colorado, including several data visualizations. One shows the case count by onset, or when the patient started showing symptoms of the disease.

The incubation period, or the time it takes from a person getting infected by the virus to start showing symptoms, is believed to be about two weeks for COVID-19, according to Nathan Brown, a communications specialist for the Colorado Department of Public Health and Environment. That’s why officials are recommending those who have been exposed to the virus to quarantine themselves for 14 days.

“So if you’re clear and free of symptoms for the whole 14 days, you should be good to go,” Brown said. “But after that, still practice that good social distancing because you can still get it while it’s out there in the wild.”

For those showing symptoms, officials are recommending isolation for at least seven days and having no fever for at least 72 hours before stepping back outside. After that, officials recommend continuing social distancing to help prevent the spread of the virus.

As of 4 p.m. Wednesday, state officials have reported 183 cases of COVID-19 in Colorado. Officials expect to report more cases in the coming days.

— Trevor Reid covers public safety issues for the Greeley Tribune. Connect with Trevor at (970) 392-4492, treid@greeleytribune.com or on Twitter, @treid71.

The post Virus may have been in Colorado more than 2 weeks before 1st case reported, state data shows appeared first on Greeley Tribune.