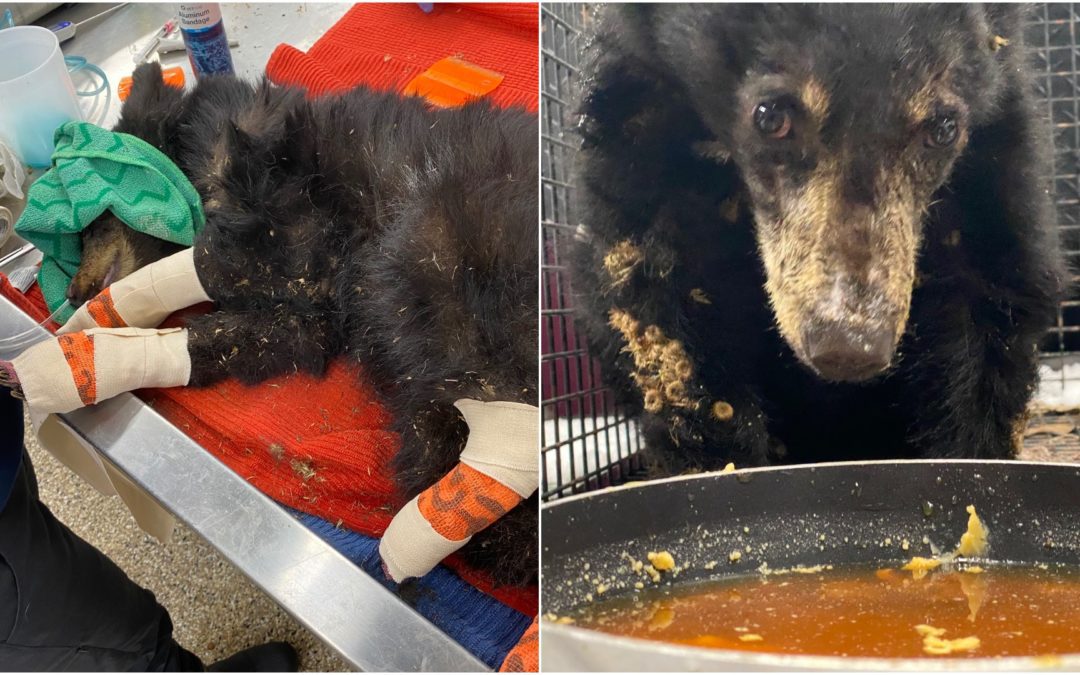 Once black bear cub got another shot at life after being rescued and treated for five months by Colorado Parks and Wildlife (CPW).

The baby bear was initially injured in the Cameron Peak Fire, Colorado’s largest wildfire in its history, which started in August of last year and was ablaze until December, burning 208,913 acres in Larimer County.

On May 5, CPW was finally able to release the bear back into the rocky mountains of its home after rehabilitation.

In December of last year, landowners on Buckhorn Road northwest of Masonville called CPW to report an injured bear cub spotted on a porch. However, upon arrival, the cub couldn’t be found. Four days later, the bear cub was once again seen sleeping on the same porch and wildlife officers were finally able to successfully capture it, said CPW in a press release.

A sweet and inspiring 10-minute-long video documenting the cub’s journey to recovery, from December to May, was recently shared by CPW on Youtube to commemorate the resilient little bear’s journey to health.

“This is an incredibly fortunate bear,” said CPW Area Wildlife Manager Jason Duetsch in the clip. “Most wild animals don’t survive the myriad of injuries they are exposed to, let alone be found, captured, and treated successfully. He definitely would not have made it through much longer. It is the smallest bear cub I have ever seen at that time of the year, which helped us make the decision to try rehabilitation.”

When found in December, the male cub was “suffering from old burns on its feet sustained during the Cameron Peak Fire, its ears were infected from frostbite, it was covered in cockleburs, was severely dehydrated, weak, and starving,” said the press release. The tiny bear cub weighed only 16.3 pounds.

“This bear’s drive to survive did most of the work and we just gave it a little boost,” said Kristin Cannon, Deputy Regional Manager for Colorado Parks and Wildlife’s Northeast region. “This bear went through an awful lot in its first year of life, let’s hope humans can now help keep it wild by not rewarding it with our food sources and lowering its chances of survival.”

Initially, the cub was brought up to CPW’s health lab in Fort Collins and was examined by veterinarians Dr. Pauline Nol, Dr. Karen Fox, and Duetsch, who believed “it had a chance to survive.”

“Since the foot injuries on this cub appeared to be healing well, and his other wounds were very treatable, we felt that with supportive care and nourishment his prognosis for recovery was very good,” stated Dr. Nol.

Though frostbite cost the cub parts of both his ears, treatment such as heating pads to keep him warm and clean bandages on his paws helped him heal.

CPW further said in the statement that “it cannot be determined how long the cub may have been orphaned or when the burns did occur, but evidence of new tissue growing on its feet when it was captured suggested that it had been quite some time.”

Now more than one year old, the healthy cub measured in at 93 pounds at the time of his release.

“(It’s release location) has the benefit of being in likely the same drainage where this bear came from originally and still has some suitable habitat post-fire,” said Clayton Brossart, the wildlife officer who released the bear.

“At the time this bear cub was transferred to our Frisco Creek rehabilitation facility, it was the 35th cub it received in 2020. In an average year, that facility rehabilitates 15-20 orphaned cubs,” Jason Clay, Public Information Officer, Northeast Region CPW told Newsweek.

“The bear would have been around 10 months old when it was found,” Clay said. “Black bears in Colorado, the only species of bear our state has, are born in the den in late January or early February while the mother is in hibernation.”

In another story of triumph, a separate bear cub was also released by CPW in May. This needy cub was found injured north of Durango and was treated for four months at Frisco Creek Rehabilitation Facility.