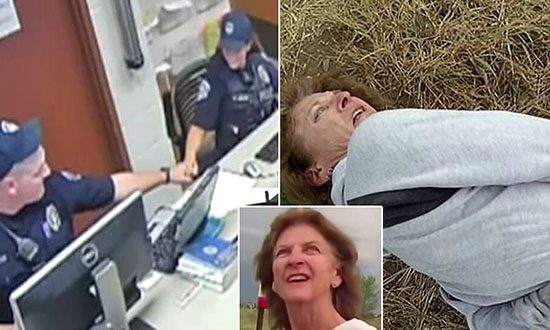 A Colorado police department is under fire for joking about their use of excessive force after arresting a 73-year-old woman who has dementia.

The Loveland Police Department claimed they had no knowledge of Karen Garner’s injuries after she was violently arrested by two officers.

On June 24, 2020, Garner was accused of shoplifting from a Loveland Walmart. She wandered out of the store and apparently forgot to pay for $13.88 worth of merchandise.

When she offered to pay for the items, Walmart employees refused and took the items back. After Garner left the store, they called police.

The video begins with Officer Austin Hopp catching up to Garner as she walked along a highway, picking wildflowers.

“Do you need to be arrested right now?” Hopp asked Garner, who shrugged and turned to walk away. Hopp threw Garner to the ground and hog-tied her as she repeatedly stated, “I’m going home. I’m going home.”

During the brutal arrest, Garner suffered a dislocated shoulder and a fractured arm.

Later, while reviewing video of the arrest with his fellow officers, Hopp joked, “Ready for the pop?”

“What did you pop?” an officer asked. “I think it was her shoulder,” Hopp replied.

In the video, Hopp said “I can’t believe I threw a 73-year-old woman on the ground… I’m a little worried that she’s, like, senile and stuff.”

“That’s going to turn into something,” Officer Daria Jalali predicted.

As the officers laughed at the body cam video footage, Garner was handcuffed to a bench in a nearby holding cell. She seemed to be in pain but she was not treated for her injuries for nearly six hours.

Hopp said he reported his use of force to the Blue Team, which conducts internal reviews of use of force during arrests.

After the video was made public on Monday, the Loveland Police Department claimed it wasn’t aware of any complaints about Garner’s arrest or that she was injured.

But the video conflicts with both statements.

According to a lawsuit, Garner suffered a dislocated shoulder, fractured arm and sprained wrist during her June 26, 2020, arrest.

Garner’s attorney said in a statement that she released the video to expose “Loveland police’s toxic culture of arrogance and entitlement, along with their horrific abuse of the vulnerable and powerless.”

Hopp, Jalali, and a third officer are on paid administrative leave following the fierce public backlash.

Watch the disturbing video below.