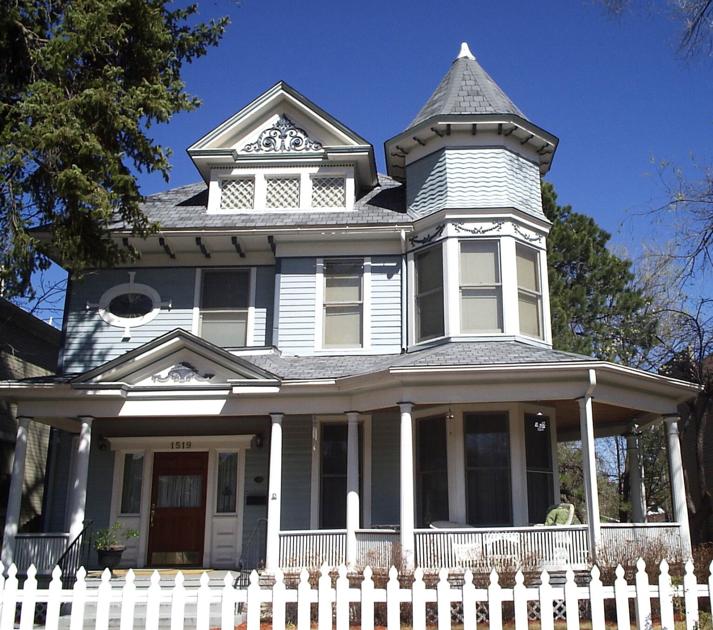 They have been visible to you for as long as you have been hanging around the downtown region of Colorado Springs, but chances are you have paid little or no attention to them. They are those excessively decorated square, octagonal, and rounded towers located at the corners of Victorian-era homes.

They hide from you downtown, in the Near North End between downtown and Colorado College, on the Colorado College campus, and in the Old North End north of the college. You won’t ordinarily see them as you hurry about your busy life. You have to get out of the car and go for a walk in order to observe them closely and appreciate their great “curb appeal.”

Towers tend to be located at a corner of the home — right or left — on the side facing the street. Yet sometimes towers are located along the side of a house or at a rear corner. They also can be found in the center of the façade of a home, often rising above the front door and looking like the pilot-house on a steamboat. There is a house on Wood Avenue that has two tall towers, one at each corner of the front.

These Victorian-era towers come in all sizes. Some are tall, stretching upward for three stories. Others are short and squat, occupying the corner of a bungalow or cottage. Most are two to two-and-a-half stories high and are capped with a conical roof shaped like a “witch’s hat,” the kind found on the Wicked Witch of the West in the film The Wizard of Oz.

Atop the witch’s cap you may or may not find a finial — a cast iron pipe jutting straight up in the air that comes to a point or ends with a small round ball. A rare few finials have snakes or other weird animals curling up them.

Our Victorian-era towers come in a variety of shapes. Some are square while others are octagonal or rounded. In all cases they demonstrate the skills of late 19th century carpenters who could design and execute such unusual architectural forms. Rounded towers, with rounded glass windows, are particularly admirable.

It is fun to be inside a home with a tower and see how the occupants are using the somewhat unusual interior space. In one home a card table and chairs had been set up to create a game-playing area for chess, checkers, bridge, or any other table game. Inside another tower, this one at Colorado College in the Career Center, chairs and a desk were ready for personnel officers from business firms to interview job-seeking graduating seniors.

In most cases, however, the interior of a tower creates an interesting looking corner of a living room or dining room. It can also be a great place to display that antique family chair or table you inherited from Aunt Annabel.

Most of our Colorado Springs towers are fashioned from wood. In many cases, the outside walls of the tower will be covered with a variety of wood surfaces, such as siding or regular square shingles or shingles shaped like fish scales. Putting a different wood surface on different stories of the tower just adds to the Victorian-era charm.

Towers can also be built of brick or stone. A favorite is at the El Paso Club building at the northwest corner of E. Platte Avenue and N. Tejon St. across from Acacia Park. This tower is built of brick and is three-and-a-half stories in height.

We can thank Queen Victoria of England and the gold strikes at Cripple Creek and Victor in the 1890s for our ornate residential towers.

Colorado Springs was founded in 1871 and began to develop during the last 25 years of the reign of Queen Victoria in England. She passed away in 1901, but she gave the name Victorian to a period of architecture famous for an elaborate decorativeness that manifested in the form of towers, often clock towers, on large public buildings. This propensity for building towers was then copied on residences built during the same period, both in Great Britain and the United States.

When gold was discovered by Bob Womack at Cripple Creek and Victor in 1891, the instant wealth flowed down the mountains to Colorado Springs. Stock trading and manufacturing mining supplies concentrated in the Springs rather than at high elevation in Cripple Creek and Victor. The result was plenty of money to decorate the new homes of our gold-profiting upper middle-class with beautiful and ornate Victorian-era towers.

Colorado Springs is lucky to have this treasury of homes with towers. Slow down a bit, go for a walk, and appreciate them.