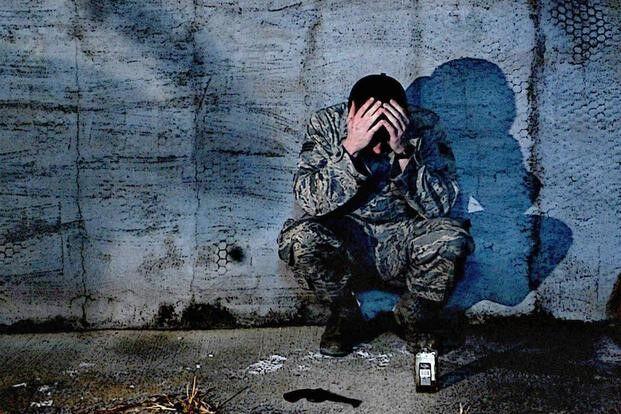 Suicide among veterans set record highs last year statewide and in El Paso County, with more than one dying by suicide every week.

Colorado’s suicide rate also is described as “significantly higher” than the national rate for veterans, according to the newly released 2020 National Veteran Suicide Prevention report from the Department of Veterans Affairs.

Colorado recorded 43 deaths by suicide of male and female veterans per a general population of 100,000, compared with 32 deaths nationally for 100,000 in population for 2018, the most current year for national statistics.

“There are people really struggling,” said Kirsten Belaire, director of behavioral health at Mount Carmel Veterans Service Center in Colorado Springs. “There are a lot of compounding factors.”

Statewide, the latest statistics show last year’s 217 veteran suicide deaths marked an all-time high and a 25% increase over 2018. Of those in 2019, 56 were from El Paso County, also the highest ever locally, according to the Colorado Department of Public Health and Environment and the state’s violent-crime statistics.

Nationally, the veteran suicide rate remained flat between 2017 and 2018, according to the latest annual report from the VA, which is being heralded as an encouraging sign. A total of 46,510 American adults died by suicide in 2018, of whom 6,435 were veterans. That’s just 36 more veterans than 2017.

Those include a lack of connectedness, financial instability, relationship problems and easy access to lethal means, such as guns, he said.

Firearms accounted for 64.7% of all veteran suicide deaths in Colorado in 2018, vs. 51% across the nation, the VA’s report says.

Guns are familiar to former military members, who consider gun ownership a freedom and a civil right, Belaire said. “This is a population whose career is centered around firearms,” she said.

But using a gun in a suicide attempt is the most lethal means, statistics show.

“If they attempt suicide with a firearm, it’s likely going to be completed,” Belaire said.

Having a diagnosis of post-traumatic stress disorder also contributes to suicidal tendencies among former military men and women, Belaire said.

A recurring theme she hears from clients — most of whom have had suicidal thoughts —  is that they feel a sense of hopelessness that won’t go away and they don’t see changing.

“If we could convince them that after 24 hours, they’ll be over this, we could end suicide,” Belaire said. “Being within their own minds and skin is overwhelming and so painful that they just want relief.”

And they unfortunately convince themselves that taking their lives is the only way to get it, she said.

With COVID-19 reducing social interaction and connection to family and friends, people losing their jobs and worrying about the uncertainty, there is concern that 2020 could be another record-setting year for veteran suicides.

Belaire said pandemic restrictions are forcing people into isolation and have removed some of the coping skills veterans often use to improve their mental health, such as going to the gym, shooting pool with buddies and circling up for a discussion about what they’re going through.

“They want behavioral health services and want to be seen in person, but many don’t feel comfortable with wearing masks and telehealth appointments,” she said. “If the kids are at home a lot, and there’s no private alone time, there’s a sense of feeling frustrated and disempowered.”

Veterans also have inner struggles about facing death daily during deployments and now being told they need to fear COVID-19 and obey mandates, she said.

Also, she said, they may not seek mental health assistance because they are afraid of being locked up or having their weapons removed.

“The isolation piece is very hard because a lot of our vets really want the community and that connection,” Belaire said. “Having to stay at home, they’re in their head, remembering, flashbacks are coming back, there are sleep disruptions.”

Connectedness is one protective factor that professionals have identified as contributing to warding off suicide.

She’s found, though, that when vets have “a safe place to process their suicidal ideation” and not worry they’ll be locked up or have their freedoms taken away, and their families have support for what their loved one is going through, then things seem to work out better, and a life potentially can be saved.

What appears to help the most, France said, is combining proper mental health treatment with community intervention programs that address underlying issues, such as unemployment and homelessness.

Initiatives involving government officials, schools, mental health professionals, hospital systems, veterans programs and other organizations have been building for years, with what the new VA report calls a “groundswell of support for coordinated efforts at the local, regional and national levels to implement a public health approach to end suicide.”

Nationwide, suicide rates for veterans who receive help from Veterans Health Administration programs are lower than veterans who do not, according to the report.

Among vets who seek care, rates fell from 2005 to 2018 for those with depression, anxiety and substance use disorders.

Colorado’s high rates led the state’s Office of Suicide Prevention to set a goal of being the first state in the nation to demonstrate a measurable reduction in deaths by suicide. A group called the Colorado National Collaborative for Suicide Prevention also has been working to determine whether a communitywide public health approach can reduce self-inflicted fatalities.

The local goal is to reduce El Paso County’s suicide rate by 20% over the next five years.

Among new initiatives, an El Paso County Suicide Prevention Task Force kicked off in January to help veterans, active-duty military and their families avoid suicide by providing educational and supportive events and programs.

An El Paso County Firearm Safety Workgroup formed last year by Dr. Erik Wallace, associate dean for the Colorado Springs branch of the University of Colorado School of Medicine, is making progress on public messaging about safely storing guns in homes. The group plans to film a video in January to be distributed publicly.

Wallace is calling for voluntary safe storage of guns in homes of vulnerable family members — unloaded and secured with trigger locks, cable locks or key-locked cases, or stored off site — as well as locked prescription medications and alcohol, since many people ingested alcohol at the time of taking their lives.

It’s possible the work will show gains this year, despite the ramifications of COVID.

However, he said, the number can be misleading, since his office does not use a central database to search for history of service of the deceased.

“There are many (deaths) of ‘unknown,’ due to the fact that we couldn’t find family for one reason or another,” he said in an email. “Our stats are based on what we observe at the scene, discover through funeral arrangements or what their family tells us.

“So undoubtedly ours is an undercount.”