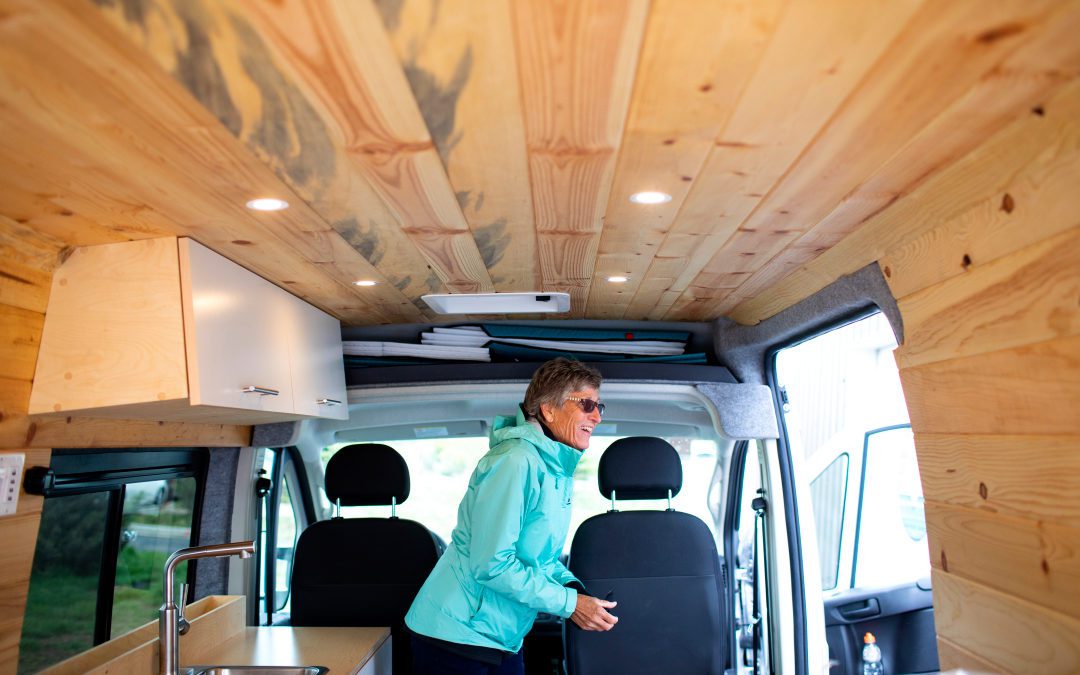 GYPSUM — Darla Letourneau is ready for an adventure of a lifetime.

“This is the first time I’ve ever done anything like this by myself,” the 72-year-old Floridian said as she circled and studied her brand new Promaster van, custom converted by Dave & Matt Vans.

Letourneau is planning to spend the next half a year traveling across the West. She spent months searching for the perfect campervan to carry her far and wide.

This story first appeared in The Outsider, the premium outdoor newsletter by Jason Blevins. Become a Newsletters+ Member to get The Outsider at . (Existing members, click here to learn how to upgrade)

“This is my dream,” she said. “After this past year, I want this trip to restore my faith in humanity. I want to connect with people and have an adventure.”

Adventure-seeking roadtrippers like Letourneau are spiking Colorado’s booming van conversion industry. A few years ago, there were a handful of Colorado companies converting cargo vans — like Mercedes Sprinters and Dodge Ram Promasters — into adventure rigs. Today, there are dozens, most of them formed in the past two years. It’s a roaring industry, built largely around the go-anywhere, work-anywhere vanlife ethos that swept social media in recent years. And the vanlife phenomenon exploded last year as the pandemic sent more urbanites fleeing to the lonely hills.

Dave Ramsay and Matt Felser went to college together in Massachusetts but started talking vanlife in 2018. Felser was teaching at Vail Mountain School and spending summers in his custom-built Promaster camper. Ramsay had by then been living in a van for years. After Felser put his van on Craigslist in the fall of 2018 and sparked a bidding war, he joined Ramsay with a plan to convert other people’s vans into campers.

The early projections for Dave and Matt Vans called for building one van a month in 2019. They built 40, buying a handful of used rigs but mostly converting vehicles provided by their customers. If someone brought their own van, a conversion to a camper started around $20,000. Last year they got a dealership license and started buying their new Dodge Ram Promaster vans.

The unique direct partnership with Dodge Ram allows them easier access to more vans, which is a big deal because van production has slowed due to the global computer chip shortage and other supply chain issues. They’ve stopped converting used vans and are overhauling only new vehicles with prices starting around $60,000.

In the first couple months of 2020, Dave and Matt Vans fielded about five inquiries a week. After a dark period in late March as the pandemic shut down everything, interest exploded. By June, they were getting 50 inquiries a day.

Since early 2019 they have moved into four different facilities, from a one-car garage into a giant campus of steel warehouses surrounded by a sea of new Promasters. Soon they will move to their own 2-acre parcel with a 50,000 square-foot factory near the airport in Gypsum.

“Everything you need. Nothing you don’t.”

In the past two years, they’ve built about 250 vans. This year, they will build 300 new Dave and Matt Vans campers. All have already been sold. They are taking orders for next year and will soon extend their production schedule into 2023.

Felser walks into the densely packed parking lot with a fistful of keys. He punches fobs until a nearby van chirps. He walks over and slides open the door. The insulated walls and ceilings of the vans are lined with blue-tinged beetle-kill wood cut by a computerized laser facility in Denver. A simple sink runs off 7-gallon jugs in a cabinet next to a dorm fridge. A small heater is tucked below the passenger seat. A king bed rests above two deep-cycle lithium batteries — powered by roof-mounted solar panels. Below the bed is a large space for bikes, bags, boats or boards.

“Everything you need,” Felser said. “Nothing you don’t.”

Felser and Ramsay call their vans lifestyle vehicles, not recreational vehicles. That branding jibes with the Dacono-based EarthRoamer company, which calls its $700,000 to $2 million expedition campers “adventure vehicles.”

“With recreational vehicles, the vehicle defines its use,” Ramsay said. “It’s going to be used for recreation. Versus our vision, where your life defines how the vehicle can be used. It’s a very different approach with a lifestyle vehicle and we think that’s what we are building; this is more of a multi-purpose, anything-goes vehicle where regardless of your interests, this vehicle can help you achieve things in a better way.”

The Recreation Vehicle Industry Association, or RVIA, counts “campervans” as the fastest-growing segment in the world of recreational vehicles, logging 7,222 sold in 2020, up 70% from the year before. Campervan sales for years accounted for about 9% of motorhome sales, but jumped to 18% in 2020. And sales of those campervans doubled in every month of the past year compared with the same month in 2019.

More than 11 million American households owned an RV in 2020, with more than half of those owners under the age of 55. This year is pacing toward a record for the RV industry, with the nearly 150,000 recreational vehicles shipped from manufacturers in the first quarter of 2021 marking a new high, and a 48% increase over 2020, according to the latest report from the RVIA. People between the ages of 18 and 34 make up the fastest-growing segment of the RVing market, the association’s latest demographic reports show.

Class B motorhomes, which the association defines as campervans, are smaller RVs that look a lot like converted vans but leave manufacturing facilities as fully-baked RVs, not cargo vans. So the association’s tally of campervan sales does not include converted vans like those customized by Dave and Matt Vans or Tourig, a high-end van conversion company in Golden.

“But there is definitely an overlap there,” said Monica Geraci with the RVIA, who sees the growth in converted campervans feeding more buyers into traditional RVs.

More than 92% of the people who own Class B motorhomes are under the age of 50, Geraci said, which is a younger demographic than the Baby Boomer generation that has traditionally supported the RV industry.

“It’s just grown so popular, that idea that you can just pack up and go wherever and work wherever,” said Geraci, describing new outfits like Harvest Hosts, which offers memberships for fee-free camping at 2,300 different wineries, breweries and golf courses across the country.

A brief survey of Colorado van conversion companies reveals just about everyone is busy.

Eric Miller, who formed Tourig in 2015, is booked out for 15 months. He’s added more staff as demand has spiked for his luxury vans, which Tourig converts for $200,000 or more.

He moved his 22-employee operation into a new building in Golden last year and is now building a second production facility next door.

“It’s kinda crazy what’s happened with this industry,” said Miller, who spent nearly a decade living out of a van he built for himself in 2001 when he was an outdoor gear rep traveling the West. “There were a handful of players in this business when we started and we were the new kids. Now there are probably a dozen companies within 20 minutes of my office. I bet there are more than 50 in Colorado right now.”

Jason Schirato launched Aspen Custom Vans in Basalt in 2018, averaging about three to six van conversions a year. Now he’s doing 15 a year, building campers in vans provided by his clients for $25,000 to $60,000.

“It is hard to find vans at the moment but that does not seem to be slowing down my business,” said Schirato, noting that this year he is seeing more families buying campervans. “Everyone who found their vans seems to have got in front of the whole van craze and got in early.”

Felser and Ramsay, whose van conversion company is the only one in the country partnered with an automaker, are going through the process to have their vans certified by the RVIA as Class B motorhomes. That means they will be able to offer long-term financing for purchasers.

The two have gone from three employees in early 2020 to more than 25 workers, and they’ll soon grow to 30. A handful of them live in vans in their Gypsum factory’s parking lot.

“Their vans gave them the opportunity to take a chance and move to Colorado and find their footing and start a life in this valley,” Felser said.

The two are now talking with business owners about making vans an affordable housing solution for their employees. As housing prices explode in resort communities, it’s increasingly difficult for employers to get workers to move to high country towns where bedrooms rent for $1,500 or more.

They have a growing list of buyers who are picking up vans not for recreation, but as homes. They rattle off several stories of buyers — professionals with good jobs — who have spent a couple years living in vans while saving enough to buy a house.

Ramsay last week moved into his first apartment in more than five years. He estimates he’s saved well over $100,000 in rent by living in his van. They hope to raise the profile of vanlife not just as a fun way to spend a weekend, but as a lifestyle option for younger workers to get a toehold in a real estate market where starter-homes cost a half-million dollars.

Strolling through his parking lot of Promaster vans, Felser sees Letourneau and helps the adventure-bound traveler fiddle with her new van. New van day is a big deal, and she is excited. And a bit nervous. A spring squall swirls wet snow into her new home. She’s eager to try out the heater.

“Worst-case scenario,” she said, “is I use it this summer and sell it for what I paid after an adventure.”

Felser promises he will buy it back if she wants to sell.

“It won’t sit around here for long,” he said. “Nothing does.”