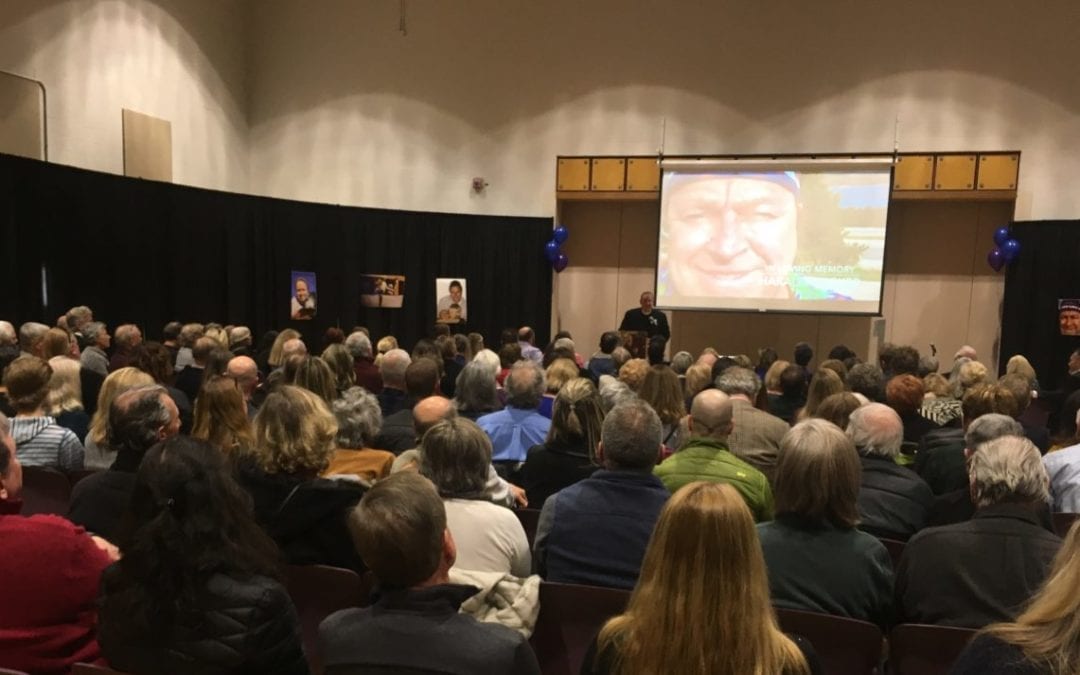 Fricker is the son of local Oktoberfest icon Helmut Fricker; the Fricker family immigrated to Oklahoma from Germany in the late ’60s.

Harald was 9 and his sister was 7 when they moved to the U.S.

“When my brother and I started school in the U.S., we didn’t speak English,” Harald’s sister, Susanne Edrington recalled on Sunday. “Harald made me feel safe in a foreign country.”

The family moved to Vail in 1974, and Harald began to develop a passion for skiing and other outdoor sports, Edrington said.

“I used to lie down under the jumps he built and film him and his friends in the air above me,” Edrington said.

Friends of Frickers including endurance athletes Matt Carpenter and Mike Kloser spoke about his passion for long distance running and mountain biking. Among Fricker’s notable achievements was a top-10 finish in the Leadville 100 running race.

“He had every aid station laid out what he was going to eat, how many calories, how long it was going to take, it was like an encyclopedia,” Carpenter said. “I took that same knowledge in my attempts later.”

In 2005, Carpenter would set a new course record in the Leadville 100 by more than 90 minutes.

“Harald opened up the world for me, and let myself and my running step into it,” Carpenter said.

Despite his many achievements in running, Carpenter said his fondest memories of competitive endurance racing occurred during his days in Vail, living in Sandstone with Fricker. On Sunday, Carpenter wore a shirt from one of those races, which was made by Fricker. It said “Vail Sign Shop Tandem Torture Team.”

Recalling those races, Carpenter said the tandem bike race following the real race would have competitors hindering their ability to ride the tandem bikes properly because they were laughing so hard.

“Harald and I skipped the real race so we’d be fresh in the tandem race,” Carpenter said.

Among Carpenter’s proudest accomplishments, he said, was when Fricker and he defeated Kloser and Dawes Wilson in the tandem race. With both

Kloser and Wilson in attendance on Sunday, Carpenter was able to rub it in one more time.

“I think Harald would be really proud that 30 years later I’m still bragging about the tandem torture team,” Carpenter said.

Fricker authored two books about the Pikes Peak Ascent running race, and introduced both Carpenter and Kloser to the race. Both men reminisced fondly on having the advantage of Fricker’s tutelage in that race when they were making their attempts at it.

Carpenter went on to become a 12-time winner of the Pikes Peak Ascent marathon, and still holds the course record.

The first time Carpenter did the Pikes Peak Ascent, he only attempted the uphill portion of the race, and Fricker drove him back down.

“On the way down, I said Harald you’ve got to pull the car over, I’m going to throw up,” Carpenter recalled.

When Kloser decided he wanted to do the race, “The first thing I did was reach out to (Fricker),” Kloser said.

Fricker provided Kloser with some information and asked him what time he was trying to go for. He then broke down all the times Kloser would need to hit to make his goal.

“I remember writing down all the times on my hand and running up the mountain thinking OK I’m on pace here,” Kloser said Sunday.

Sure enough, when he reached finish, “Harald was up top,” Kloser said.

Fricker was also well known around Eagle County as being an entrepreneur and tech enthusiast who developed more than 400 websites.

Despite his many achievements, however, Fricker would most like to be remembered as an impassioned father to his children, Kiah and Miles Carpenter, who are now in their 20s and living in Colorado.

As Kiah and Miles were growing up, Fricker’s tech savvy and impassioned parenting merged in his effort to document the many special moments of their childhoods.

When Fricker got into his late 30s and 40s, “The emails weren’t about running and stuff as much,” Carpenter said. “I saw (Kiah and Miles) grow up on the internet.”

Kiah and Miles spoke on Sunday about the values imparted to them from their father.

“Two really important things he taught Kiah and I that I will forever cherish is strength and gratitude,” Miles Fricker said.

“He was incredibly loving and selfless by always putting others first,” Miles added. “When you were talking to him, you were the only one that mattered.”