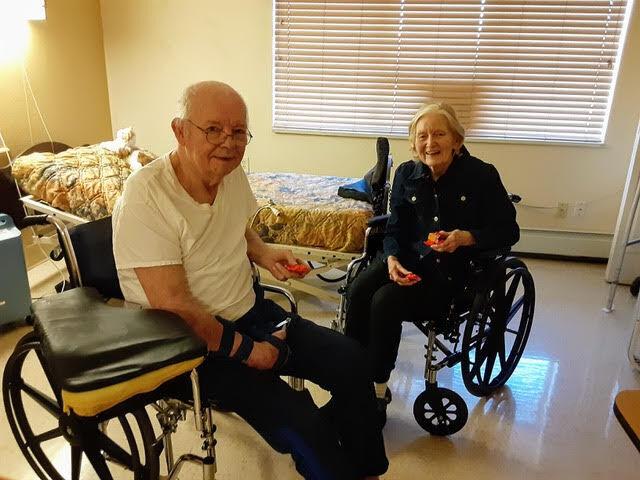 For nearly a year, Coloradans have dealt with varying degrees of separation from loved-ones in assisted-living facilities. Doors have been shut to protect the most vulnerable, and in-person visitations have been limited to windows and brief, distanced outdoor talks.

The bulk of Colorado’s COVID deaths and hospitalizations have been among the state’s oldest residents. Two-thirds of those killed by the disease were 75 or older. Nursing homes and long-term care facilities have been hammered by outbreaks, which continued to grow even as the state’s overall situation leveled out.

But the vaccine provides the first glimpse of the end. In Colorado, the state has shifted the focus of its vaccination push to those over 75, while the federal government’s partnership with two national pharmacies has kickstarted inoculations in long-term care facilities. Vaccinations for residents and staff should be completed in the coming weeks.

The Gazette spoke with the children of some of those residents who have now been vaccinated about the past year and the impacts of the COVID-induced separation.

In a two-week span in September 1957, Rogers Reeves wrote Jackie Batton three letters. A football player at Louisiana Tech, he was barely 42 miles from her, but he wrote her regularly all the same.

Those three letters followed a similar outline: He’d address it to his darling or honey or call her baby. He’d talk about how exhausted he was from football practice (one dateline: “Sept. 4, 1957. 2 1/2 hours after hell.”), about hunting with his friends or about the brownies Jackie’s mother made for him, which would be “history” before his next letter arrived.

In each, the last paragraph was devoted to his devotion.

In October 2019, the two in their early 80s and e nearly 61 years into marriage when they moved from Louisiana to Colorado Springs.

Jackie had developed dementia, and Rogers needed help. Their daughter, Alicia Reeves, lives in Colorado Springs, and the couple moved into a condo a half-mile from her home.

Then Rogers had a stroke, “a game changer,” Alicia said. She began to take care of her mom as her father started a three-month rehab stint. In his hospital room, she remembered seeing news stories about a virus in China.

In February, Rogers and Jackie entered assisted living. He had another stroke and went back to rehab. Alicia visited him with some clothes. The staff was in the process of putting up No Visitor signs when she walked in the door.

“We didn’t really talk about it,” Alicia said. “All of this was happening so fast, so many changes, and just so many things to do that I was very much in survival mode, one day at a time. It was almost like I didn’t have time to think about it.”

Like the rest of the country, she thought the spring shutdowns would last a few weeks.

Jackie and Rogers were separated from March until September. Rogers spent four of those weeks in Denver, after he tested positive for COVID. Her dementia progressed rapidly during those months, which Alicia and one of her providers attributes, in part, to the isolation from her husband and family.

“At that point, what became really pressing was being able to visit my mom,” Alicia said. Before Jackie’s facility allowed limited visitation, mother and daughter would be separated for 101 days. “He’s going to get through this. But I could tell — he knew what coronavirus was, he knew what was happening. She watched the news but couldn’t process it. I couldn’t explain to her why I wasn’t coming to see her anymore.”

Her dad had always been even-keeled, Alicia said, a rock. He worked on offshore construction for the oil and gas industry, and he’d traveled extensively for it. The whole family lived in Belgium for a while. He’s a fisher, a hunter, a Christian Louisiana native with a high school sweetheart. Jackie was a homemaker, and with Rogers’s extensive travel, “she had to learn to be really independent,” Alicia said. When Jackie’s memory started to deteriorate, he took care of her alone, until he couldn’t anymore.

As the months dragged by, Rogers came back to Colorado Springs, though the couple remained separated. Alicia was eventually able to visit her mom outdoors, though Jackie remained confused by the masks, the distances, the lack of hugs. Still, it was good for both of them, Alicia said.

Whenever she talked to her father, he asked her a battery of questions about Jackie. The distance wore on him.

“He started to get really emotional,” Alicia said. “I’ve never seen my dad cry as much.”

In August, Jackie moved to the same facility as Rogers, albeit in separate wings. She had to quarantine for two weeks, and as she did, the director of nursing watched her.

“After those two weeks, (the director) said, ‘I don’t think your mom needs memory care,'” Jackie recalled, “‘she needs to be with her husband.'”

Sept. 5 marked 63 years and one day since Rogers wrote to Jackie after football practice meting a song on the radio (“Remember You’re Mine”) and underlining his farewell “I love you.”

Alicia wasn’t there to see her parents reunited, but the director of nursing sent her a photo. Rogers and Jackie sat next to each other in matching wheelchairs. Her anxiety went down along with his irritability.

“I always knew my parents loved one another, but they were also pretty independent people,” Alicia said. “Those five and a half months they were away — to realize just how impactful it was to get back together. It changed their spirits.”

Marie Andrew’s great love in life has been playing the piano, though health problems make it harder for her to properly hear the music.

For hours and years, Nancy Andrew would watch her mom and teach students on the piano, and by age 5, she’d decided that’s what she wanted to do, too.

In those younger days, Nancy’s mom Marie would hold recitals in the family’s basement. She’d cram a couple dozen kids into the space, packed so tight that parents had to watch from the stairs. She’d make cookies and type up programs. Teaching and playing the piano was the love of her life, Nancy said.

Nancy, a flutist, holds — or held, thanks to COVID — those recitals, too, but she doesn’t bake the cookies.

“Never learned that lesson,” she laughed.

As Nancy grew up in New Mexico, she’d play with her mom, who accompanied her to flute competitions. When she was in high school, she and her mom played in the orchestra pit for “The King and I,” which sold out four nights. Marie played in church choirs, and Nancy jokes that they conducted their first concert together, when Marie was eight months pregnant. Nancy doesn’t remember learning to read music; it’s just always been there.

“She did what she loved,” Nancy said. “How many women could do that?”

Sometimes, her father, Jim, would put his foot down: Marie was gone too much, he insisted. He was the reserved one to Marie’s social butterfly. With her busy schedule, she always found a way to have dinner ready, even if it was sometimes fish sticks or a crock pot creation.

Jim was a physicist at the Los Alamos National Laboratory in New Mexico, where ataomic energy was harnessed and bombs were developed. None of his three daughters followed him into the sciences, but two of them became accomplished musicians.

After her father died in 2016, Nancy began making regular, 600 mile-roundtrip visits to New Mexico, where her mom still lived. Marie stayed was active. Until age 92, she woke up at 6 a.m. to swim, so regularly that her lane was known as her lane.

Now Marie has trouble hearing, and her memory’s suffered, particularly now that she spent much of 2020 isolated. At the piano, her fingers know what to do — she still knows Chaupin’s Étude Op. 10, No. 3 by heart. That’ll be the song played at her memorial service, when the time comes.

But her ears won’t let her hear the music properly.

“She tragically had to stop playing,” Nancy said. “There’s pianos at MacKenzie Place, and sometimes we’ll get her to play ‘White Christmas.'”

Nancy hasn’t seen her mom up close since March. They’ve shared some window visits, but her mom’s on the second floor and they’re limited to holding up signs and waving. They talk on the phone, and her mom reads Nancy’s words on a screen.

Marie’s mental condition — and her mental health — has deteriorated since her daughter last saw her in-person.

Before, Nancy would bring word games, or they’d play Rummy Cube. They’d walk around the facility, past the “wonderful” gardens, to a park with a little lake and a waterfall, where Marie can watch children at play.

Nancy wants that again, even if she’s learned some boundaries about how often to visit her mom. She’s built up Marie’s confidence in the vaccine every chance she gets, and Marie’s managed to hang on to it.

“If it allows us to play Rummy Cube again together,” Nancy said, “it’s worth it.”

She was afraid that her mom would die before they could reunite. At one point, when she was in the emergency room after a fall, Marie said she was ready to go. She’d lived a long life.

But nature wasn’t ready then. Now that the first tendrils of light are visible through the pandemic’s yearlong fog, Nancy wants Marie to hang on. Soon they’ll be vaccinated, and mom and daughter can walk through the flowers and watch the children play.