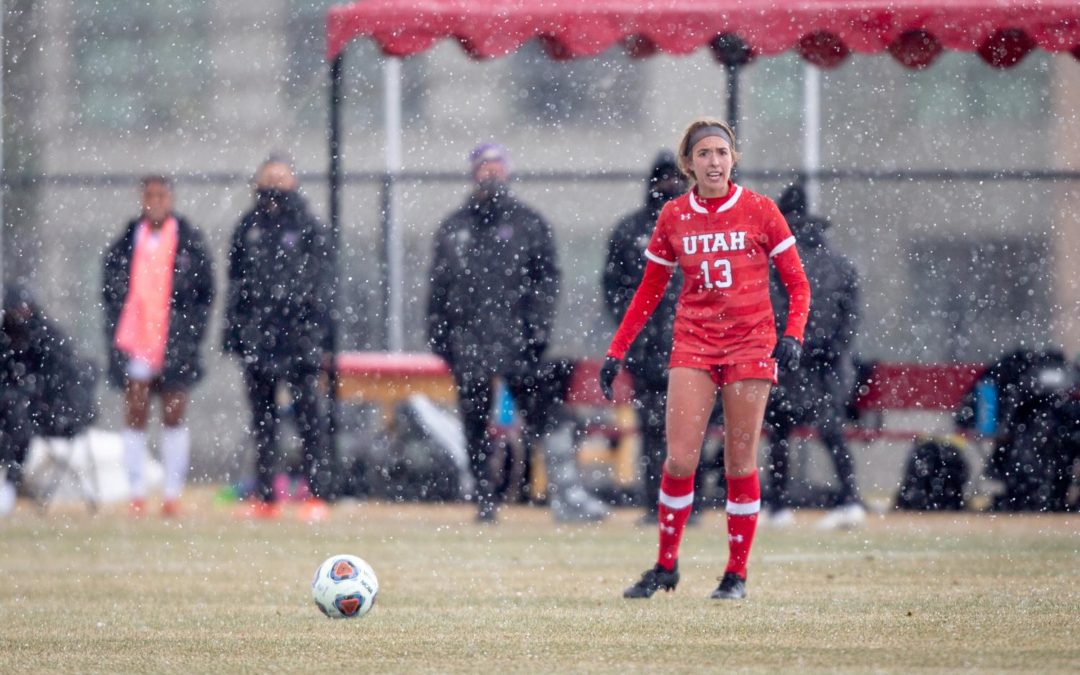 The University of Utah women’s soccer team wrapped up their season on Friday, traveling to Boulder, Colorado to face off against the University of Colorado. Despite taking an early 1-0 lead, the Utes conceded two unanswered goals to the Buffaloes and lost 2-1 in their season finale.

Colorado came out with high intensity to begin the match, heavily possessing the ball in Utah’s half. With multiple corners awarded to the Buffaloes, the Utes struggled to clear the ball out of their own end and Colorado continually applied the pressure.

The first real opportunity of the game came in the 7th minute off of a throw-in for the Buffaloes. As the ball was launched into the six-yard box, it found the head of a Colorado forward but sailed well over the crossbar.

As Utah was finally able to possess the ball in Colorado’s half, the Buffaloes were extremely physical, especially with Taliana Kaufusi, denying her any opportunity to break free.

In the 13th minute following a Utah corner, the ball dropped to the feet of midfielder Kaylee Coatney inside the 18-yard box and she fired it into the back of the net. However, Coatney was called offside and the goal would not count.

Despite the goal being called back, the opportunity seemed to raise the confidence of the Utes and the momentum swung in their direction. The 16th minute was full of opportunities as Kaufusi deflected a cross just wide of the net and Brooklyn James had a breakaway but would put it off the hands of Colorado goalkeeper Dani Hansen as she made a great outstretched save.

Over the course of the next few minutes, Utah did a great job of possessing the ball. In the 22nd minute, Courtney Talbot would dribble up the left side of the field, crossing it to the feet of Eden Jacobsen who tucked it into the bottom left corner and put the Utes up 1-0.

However, Colorado didn’t take long to answer as in the 25th minute a long ball was sent up the left side of the field to Buffalo forward Libby Geraghty who finessed it past SJ Edwards and into the bottom right corner, leveling the game at 1-1.

Over the course of the next 20 minutes, the teams traded possession but no dangerous opportunities were created. The first half would finish tied 1-1.

Starting the second 45 minutes of play, Colorado again dominated possession through the first 10 or so minutes. Even if the Utes would get a touch to the ball, it was quickly won back by the Buffaloes.

Colorado also made an obvious effort to shut down Kaufusi and Talbot in the second half, often double-teaming the Utah attackers to deny them any chance of producing scoring opportunities.

As play continued through the 80th minute, neither side was able to create any dangerous opportunities and it was mainly a battle of possession and the midfield. The goalies had it much easier in the second half as neither was significantly challenged.

That was the case until the 82nd minute when Colorado was awarded a set piece. The free kick was just above half but Colorado committed a majority of their midfield and forwards to the top of the 18-yard box. As the ball came in it deflected off of a Utah player and found the feet of Shanade Hopcroft just outside the box. Hopcroft took the shot, getting completely over it with her foot, and putting a lot of the pace on the ball which flew into the bottom left corner, giving the Buffaloes a 2-1 lead with not much time remaining.

The goal raised the intensity of both sides as Colorado was now committed to protecting their lead and Utah was anxious to tie it before time expired. Despite some last second efforts, Colorado successfully ran out the clock and the Utes dropped their season finale 2-1.

With the loss, that concludes the Utah women’s soccer season with an overall record of 4-9-3 and 3-6-2 in the conference. While the season wasn’t quite what they had hoped for, it will be a quick turn around as women’s soccer should resume its normal season in the fall.