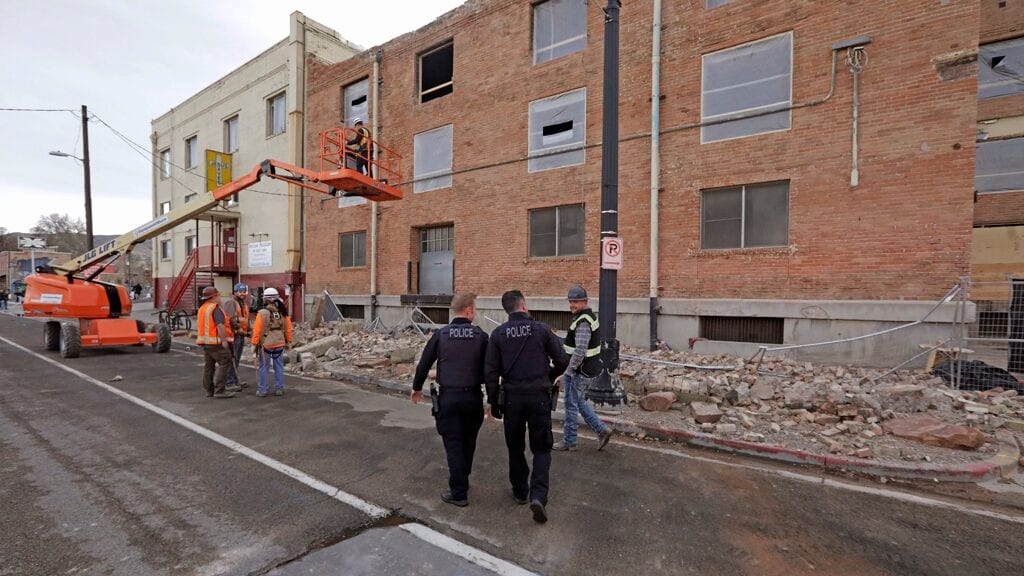 Tens of thousands of people in Utah are without power after an earthquake rocked the Salt Lake City metro area early Wednesday, causing some damage and closing the city’s airport.

The U.S. Geological Survey said the 5.7-magnitude earthquake was reported just after 7 a.m., with an epicenter located three miles north-northeast of Magna, and it occurred at a depth of six miles.

Utah Gov. Gary Herbert said the temblor was “felt across much of the state,” urging residents to follow proper safety measures in the event of any additional aftershocks or quakes.

“Please stay away from the downtown area while crews assess damage,” Herbert tweeted. “Unless you work in public safety, or are an essential employee, remain at home or telework.”

The governor added the Utah Department of Health’s state lab is assessing damage and is “currently down.”

“The poison control center has been evacuated and the @UtahCoronavirus hotline is down,” Herbert said.

Capt. Anthony Burton of the Salt Lake City Fire Department told Fox News while the quake was centered about 10 to 15 miles west of Salt Lake City, the temblor was “pretty strong” in the city.

Burton, a 13-year veteran of the department, told Fox News he has never felt an earthquake this strong in Salt Lake City. He added the fire department is currently doing a survey now of damage and that there were some reports of gas leaks.

Construction workers looks at the rubble from a building after an earthquake Wednesday, March 18, 2020, in Salt Lake City.
(AP Photo/Rick Bowmer)

There were no initial reports of major damage to buildings or injuries, Utah Emergency Management spokesman Joe Dougherty told the Associated Press. As many as nine buildings in Magna were damaged in the quake, FOX13 reported.

The Federal Aviation Administration said in a statement to Fox News the airport authority is conducting a runway inspection.

“The FAA’s Salt Lake Air Route Traffic Control Center is handling all air traffic in the area,” the FAA told Fox News. “The FAA has implemented a ground stop for SLC and is diverting inbound aircraft to other airports.”

The quake also shut down the light rail service for Salt Lake City and its suburbs. Residents reported feeling shaking across a 100-mile area, with the heaviest impact in Salt Lake County, officials said.

People were left asking “What the hell was that?” in one video posted to Twitter.

The Church of Jesus Christ of Latter-day Saints told FOX13 the Salt Lake Temple, which is undergoing a seismic upgrade, sustained some minor damage during Wednesday morning’s earthquake.

“The trumpet on the Angel Moroni statue fell off, and there is minor displacement of some of the temple’s smaller spire stones. No workers were injured,” the church said. Crews on the job site have been sent home for the day, and a full assessment is underway to determine needs going forward.”

A man looks at the rubble after an earthquake Wednesday, March 18, 2020, in Salt Lake City.
(AP Photo/Rick Bowmer)

The quake knocked pictures from walls and dishes from shelves, and people reported feeling it in the neighboring states of Colorado, Idaho, Wyoming, and Nevada.  About 70,000 people lost electricity in the Salt Lake City area, said utility Rocky Mountain Power.

After the initial quake struck at 7:09 am, the geological survey recorded four smaller quakes over the next 23 minutes, ranging in magnitude from 3.7 to 3.9.