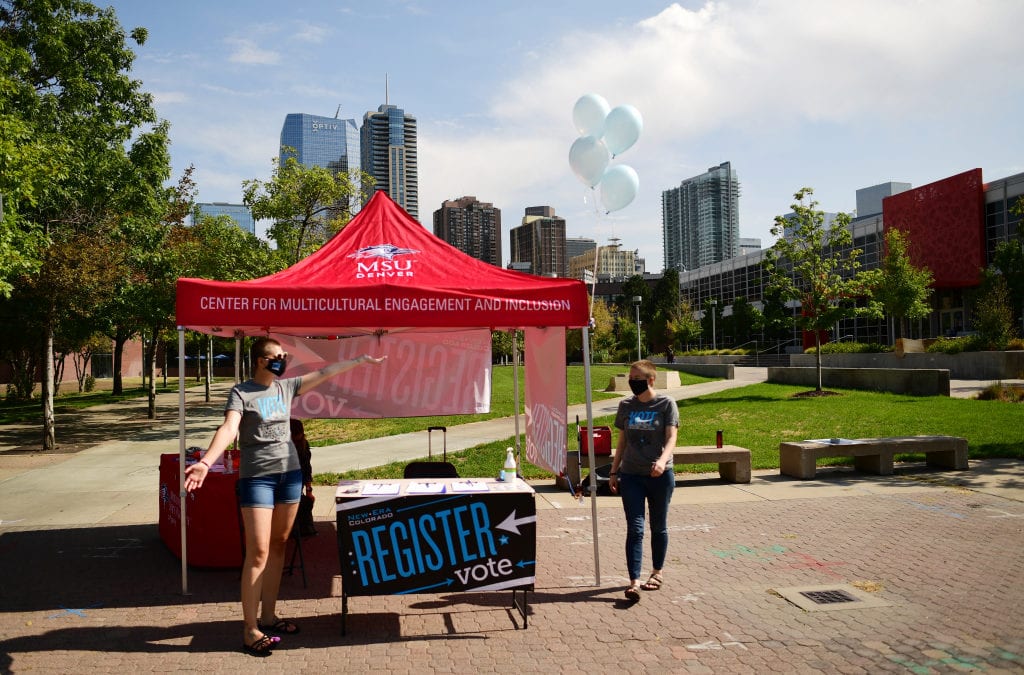 On Tuesday — National Voter Registration Day — the Auraria campus in downtown Denver was practically barren, so uninhabited that a shout of “Are you registered to vote?” easily cleared the plexiglass shield in front of New Era Colorado’s tent and echoed down the walkways.

Gone were pre-pandemic features like circus performers and walls lined with fresh goodies for the taking, temptations that in years past lured hordes of college students headed to class to the youth civic engagement group’s voter-registration booths.

Instead, a select few New Era employees — all masked — hit the university pavement to help young people register to vote, at a distance, and distribute their notoriously profane voter advocacy merchandise along with coffee drinks, chips, extra face coverings and hand sanitizer.

“There are no longer huge masses of young people scurrying across the campus,” said Nicole Hensel, executive director of New Era Colorado. “Foot traffic looks different. Normally, we go up to everyone and ask them if they’re registered to vote. This year, things look a little bit different.”

College campuses during an election year typically are a hub of voter-registration activity, campaign events, polling centers and political advocacy as those newly eligible to cast  ballots learn how. In the COVID-19 age, when gatherings are discouraged and colleges are getting called out by state public health officials for driving cases of the virus up in Colorado, youth voter education had to pivot.

Professors across the state are inviting civic-minded organizations to hop into their Zoom classrooms and walk students through voter registration. Universities are ramping up online efforts for voter education like Instagram takeovers and livestreams with election officials. Student organizers are counting on their social media savvy to influence new voters, longing for the days when packed campus lawns meant a plethora of meaningful interactions.

In the 2016 presidential election cycle, New Era Colorado — the largest young voter registration organization in the state, which also advocates for left-leaning policies — registered 55,000 voters. At the end of the 2018 election cycle, they registered more than 43,000.

So far this year, another presidential election cycle, New Era has registered more than 24,000.

Not only has the novel coronavirus altered the ways political activity is hosted at colleges, but experts worry COVID-19’s impacts on campuses across the state may disrupt the youth vote entirely.

“One of our major concerns that we have right now — as if we need anything else to worry about — is that if colleges and universities do suddenly need to move remote due to the pandemic, young people are going to need to do a massive updating of their addresses to make sure their voter files aren’t inactive,” Hensel said. “We already do a lot of reminding students to update their addresses because young people move around a lot, but it’s not as common for that to happen in September or October of an election year.”

The University of Colorado Boulder switched to remote learning last week as COVID-19 cases on campus surge, forming the biggest outbreak in the state. The school will remain online-only for at least two weeks.

“A potential level of confusion”

CU Boulder, in particular, has been a hotbed of political activity during presidential election campaigns. President Barack Obama drew thousands during two visits in 2012. Three years later, the campus hosted a Republican presidential primary debate, which CU leaders said was the largest media event in the campus’s 140-year history.

“When you don’t have these institutions operating reliably in the same ways, what do you do?” Sokhey said.

Sokhey said the political science department has been reaching out to students in a nonpartisan fashion to inform them about voting resources from reliable sources.

“It’s going to introduce a potential level of confusion if you have students and campuses in transition over the Election Day period or right up to it,” Sokhey said.

Colorado Springs’ Colorado College sent students packing at the beginning of September due to COVID-19, inciting a mad dash by New Era employees to digitally reach the scattering students and remind them to update their addresses to ensure they get their ballots.

Students who left their Colorado campus this semester and headed home can decide whether they would like their vote to count in their college town or wherever they’re newly stationed, but they need to let the state know where to reach them. Those needing to update their registration information or register for the first time can visit registerincolorado.org.

In past election years, Elizabeth Parmelee said staff at Metropolitan State University of Denver drove around a bustling Auraria campus in golf carts, making a compelling racket asking students if they were registered to vote, helping walk them through the process if needed and handing out prized “rock the vote” buttons.

A challenge to organize on campuses

MSU Denver was recognized by a national awards program, the All In Campus Democracy Challenge, for having the highest undergraduate student voting rate, 65.3%, among almost 600 college and university campuses in 2016.

“All evidence suggests that students who vote while they’re in college continue to be engaged more in democracy, so part of our motivation is to make sure all of our students get caught up in the excitement of voting and… continue to grow more as members of their communities and participants in democracy,” said Parmelee, who oversees voter activation activities at MSU Denver.

Now the campus is relying more heavily on social media to educate its students about voting logistics.

On Thursday, for example, MSU Denver President Janine Davidson and Denver Clerk and Recorder Paul Lopez held a virtual event where the pair talked about the importance of early voting.

Kelly Mutz, a 29-year-old MSU Denver student, is the university’s civic and community initiative assistant tasked with how best to reach a population known for low voter turnout at a time when there are seemingly endless obstacles, worries and discouragements demanding their attention.

“Right now with students being at home and feeling both overwhelmed and bored at the same time, looking to social media is really important,” Mutz said. “But it can be a challenge to organize so much remotely.”

For example, Mutz said, with so few in-person events to snap photos of, there are few fresh images to attach to social media posts encouraging student voting, but Mutz and her colleagues are innovating around the issue through graphic design and archived photos.

“Ninety percent of the people on campus lean Democrat,” Fratino said. “Tabling — that’s our most effective means to advance the conservative cause. It’s a lot easier to get people to discuss their political views face-to-face. It’s not great via social media, where people just want to argue. Losing those face-to-face conversations is hard for our club.”

Fratino said the student organization — about 20 consistent members strong, but dwindling as Zoom meetings this semester stretch on — is still gathering online for virtual discussions and to host guest speakers. During a normal academic year, Fratino said the group would host in-person events including voter registration help.

“Obviously, this year that’s not possible,” Fratino said. “Hopefully whenever we start in-person, we’ll be able to get members to come back.”