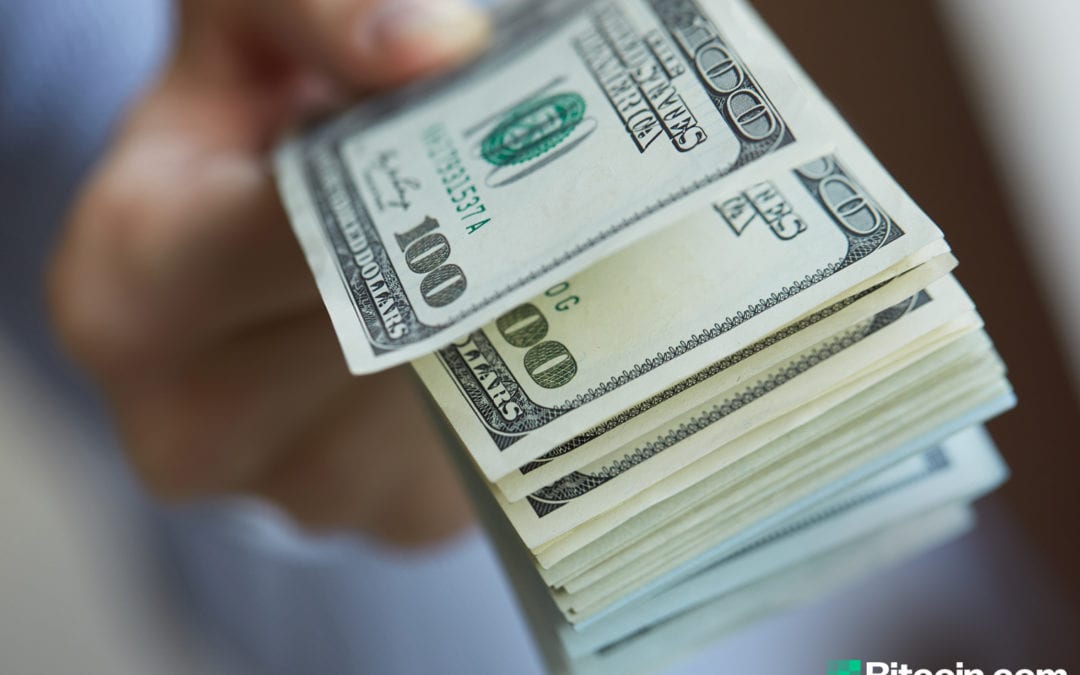 The entire world has been focused on the economy as the coronavirus outbreak has devastated global markets. While stocks, commodities, and barrels of oil plunge in value, there’s been considerable demand for cold hard cash in certain countries. According to reports, Wall Street’s elite has been trying to withdraw $30-50K per person as they flee the Hamptons. Moreover, various individuals across the U.S. are claiming financial institutions like Chase and Bank of America are restricting cash withdrawal amounts.

Cash is something everyone looks for during times of economic hardship and right now banks are struggling to provide liquidity. During Wednesday morning’s trading sessions, global stock markets and futures continue to lose ground. The price of oil has plummeted even further from last week and is at its lowest value per barrel in 17 years. The price of crude oil is hovering around $43 per barrel and Goldman Sachs predicts the price will drop to $20 per barrel soon. Oil prices have already begun to hurt people within the gas industry as 3,500 Halliburton employees from the North Belt facility in Houston have been laid off due to the price decline. While facing massive layoffs in industries like airlines, tourism, and construction, people are in search of hard cash to help hold them over through the economic storm.

Chase is insolvent. Bank run. Proceeded to lie to me to go around outside the drive thru without my mask and she would give me the 5k promised earlier ($2k rationed per customer). I did so and they refused to give me it. Manager demanded I delete the video. $JPM $XLF pic.twitter.com/DOF6Gq6h6I

News.Bitcoin.com reported on how in the Hamptons, New York’s elite have been going to banks and asking to withdraw large sums of cash. According to reports, banks like Chase, JPMorgan and Bank of America (BoA) have been limiting withdrawals. This is because the rich from New York have been asking for $30-50K withdrawals so banks have created a limit between $3-10K in some areas. During the market massacre on March 12, Manhattan Bank temporarily ran low on $100 bills after a large rush for cash. A BoA spokesperson told the public that there were only issues with large denominations and individuals are able to withdraw $20-50 notes. “We don’t keep large amounts of cash in big bills in the branches because it’s dangerous for our employees and there is low demand,” BoA stated.

Bank of America is limiting cash withdrawals to $3,000. Expect that number to drop over the next few days.

There are people complaining on social media about the withdrawal limits from certain banks in the U.S over the last few days. “Go to the bank today and ask to withdraw your entire balance,” one individual tweeted on March 17. “They are refusing to give out more than $5,000 — Even if your account has $20k. Even if your normal withdrawal limit is $10,000 daily.” On March 14, a person from New York tweeted: “Food chain is broken. Went to Stop & Shop [and] shelves are empty. Meats gone. No more eggs — [and] the bank would only permit a $2,500 limit per day withdrawal.” Another Twitter post shows a man visiting Chase bank and recording a video of a manager refusing to give him $5K. Moreover, the branch manager from Chase asked the person to delete the video. The man said:

Chase is insolvent — Bank run. [The bank] proceeded to lie to me to go around outside the drive-thru without my mask and she would give me the $5K promised earlier ($2K rationed per customer). I did so and they refused to give me it — Manager demanded I delete the video.

Starting from today I’ll start to withdraw cash amounts until I reach a buffer of 6 months for living expenses.

Keep in mind that governments:

– will discourage cash withdrawals
– can ban the usage of cash payments

All because they’re shit scared of an impending #bankrun

The U.S. is not the only country that is having cash problems as European banks have shuttered hundreds of branches since the Covid-19 spread. For example, the financial institution HVB closed 101 branches across the EU. Reports detail that a few German banks are imposing withdrawal limits and customers can only withdraw 1,000 euros per visit. Ever since last Thursday’s stock market crash, people are reminded of the economic disasters in the past like 2008’s Financial Crisis, ‘Black Wednesday’ in 1992, and ‘Black Monday’ in 1987.

However, those crashes didn’t cause massive bank runs; the last time that happened was during the Wall Street crash in 1929. During the Great Depression throughout the early 1900s, the 20s and 30s, there was a massive run on savings and loan operations and financial institutions across the U.S. The economic crisis sparked by the coronavirus is causing these fears again.

“Bank runs are starting in Colorado,” another man from the U.S. tweeted on March 17. “Smaller towns and small cities are not allowing walk-ins [or] anyone, along with limits on cash withdrawals.”

How To Prevent A Bank Run During A Manufactured Crisis pic.twitter.com/K1ZMWRUK3l

In this crazy environment of financial calamity, people are uncertain where cryptocurrencies like BTC will stand. A blog post published on March 17 by Bitmex Research predicts high inflation from all of these events. Just like many crypto supporters, Bitmex researchers think that BTC will shine during the inflationary aftermath. “In such an economic environment, with high inflationary expectations, gold looks set to shine,” Bitmex wrote. “But what about Bitcoin? Bitcoin has crashed by almost 53% (peak to trough) in the 2020 Coronavirus crash, as investors raced to the U.S. Dollar. In many ways this was inevitable. Where the Bitcoin price may shine is in the volatile inflationary aftermath of the response to the crash.”

At press time, BTC is hovering just above the $5K region but the asset’s value seems to be dragging downwards and flirting with sub-$5K. Even with prices so low, people believe the possibility of bank runs and significant cash liquidity issues will drive more people toward cryptocurrencies. “If you think bitcoin isn’t a safe haven asset, just wait until the bank runs begin,” BTC supporter ‘Bitcoin Bacon’ tweeted on Tuesday. The day prior another individual shared a picture of his stacks of $100 bills on Twitter and said: “Advice…[I] just cleaned out one of my accounts to get liquid…bank runs will be here by next week.”

What do you think about the economic carnage causing cash shortages and banks adding withdrawal limits? Do you think that cryptocurrencies like bitcoin will benefit from this financial calamity? Let us know what you think about this subject in the comments section below.

Disclaimer: This article is for informational purposes only. It is not an offer or solicitation of an offer to buy or sell, or a recommendation, endorsement, or sponsorship of any products, services, or companies. Bitcoin.com does not provide investment, tax, legal, or accounting advice. Neither the company nor the author is responsible, directly or indirectly, for any damage or loss caused or alleged to be caused by or in connection with the use of or reliance on any content, goods or services mentioned in this article. Price articles and market updates are intended for informational purposes only and should not be considered as trading advice. Neither Bitcoin.com nor the author is responsible for any losses or gains, as the ultimate decision to conduct a trade is made by the reader. Cryptocurrency and global market prices referenced in this article were recorded on March 18, 2020.

Do you want to maximize your Bitcoin Mining potential? Plug your own hardware into the world’s most profitable Bitcoin mining pool or get started without having to own hardware through one of our competitive Bitcoin cloud mining contracts.

Since March 12, the Makerdao community has been struggling with the stablecoin DAI which has been over $4 million undercollaterized… read more.

Jamie Redman is a financial tech journalist living in Florida. Redman has been an active member of the cryptocurrency community since 2011. He has a passion for Bitcoin, open source code, and decentralized applications. Redman has written thousands of articles for news.Bitcoin.com about the disruptive protocols emerging today.