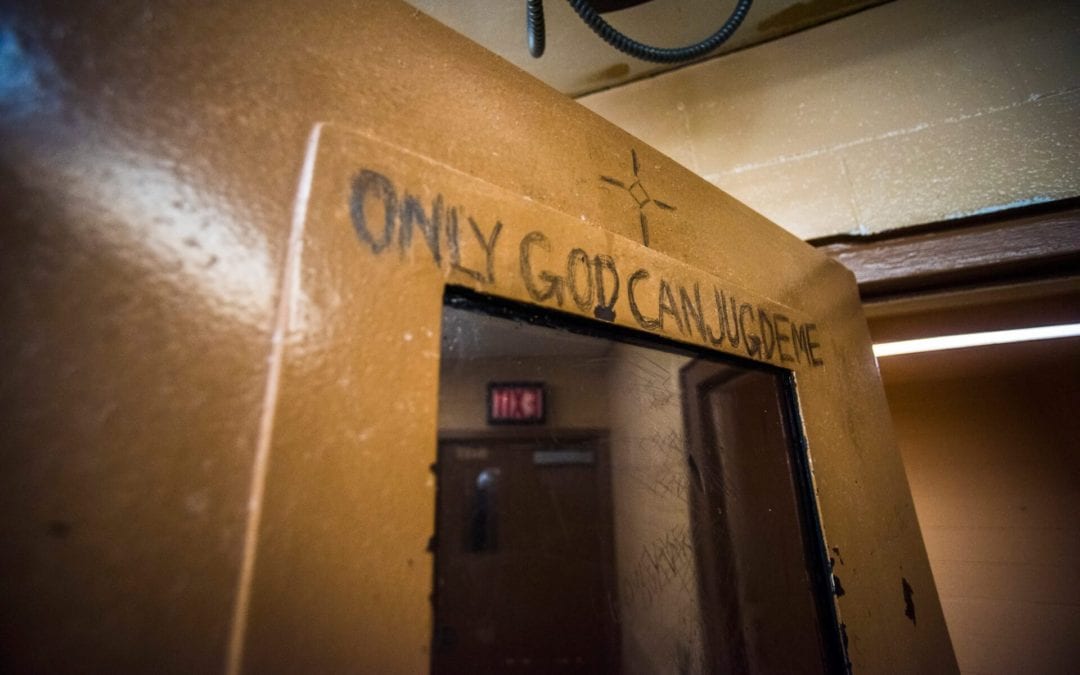 This story was originally published on April 3, 2020. That same day, without explanation, the Colorado Supreme Court denied a petition from defense attorneys seeking to free more inmates from jail. Maureen Cain, a public policy liaison for the Colorado State Public Defender’s Office, which helped file the petition, said on Monday, April 6, public defenders will continue to file individual motions in each of the state’s 22 judicial districts. She said there will likely be more litigation.

George Brauchler, the district attorney in the 18th Judicial District, celebrated the court’s denial of the petition: “Those housed in county jails are not hotel guests or patrons of a cruise at sea. They are incarcerated because they have either committed a crime worthy of taking away their liberty, or they are accused of a serious crime and pose a significant risk to the community,” Brauchler said in a statement. “Neither of those facts is diminished by the existence of COVID 19. The community is not safer or healthier when we force those who pose the greatest risk to our safety back into our neighborhoods, while we are shut in at home.”

Below is our original story.

Criminal defense attorneys Friday morning called on chief judges across the state to release more inmates from jail, saying the COVID-19 response from Colorado’s 22 judicial districts has been patchy.

The petition from the Office of the Colorado State Public Defender, Colorado Criminal Defense Bar and the Office of Alternate Defense Counsel calls on judges to use their authority to reduce the number of people taken into custody, release pretrial detainees, and shorten jail and work-release sentences.

“COVID-19 poses an imminent public health threat to people who are incarcerated, who are disproportionately vulnerable to the virus, where social distancing is impossible, and with facilities that do not have adequate medical care to meet these needs,” said State Public Defender Megan Ring in a statement.

The state’s 57 jails can hold up to 15,465 people, according to data from the state’s Division of Criminal Justice. A majority of the inmates in Colorado’s jails are yet to be sentenced or tried and may be incarcerated simply because they cannot pay the bond required for their release. Attorneys say this may violate the Equal Protection Clause prohibiting the government from jailing people solely because of poverty. They also say these inmates have a constitutional right to safety under the Eighth Amendment, which prohibits cruel and unusual punishment.

The state’s jails see a lot of churn, with those arrested cycling in and out, which increases the odds of the virus being introduced behind bars. Between October and the end of December last year, for example, about 53,000 people were booked into Colorado’s jails. Inmates share cells, sinks and toilets. “The conditions in these facilities do not allow for appropriate infection control protocols and will make the current COVID-19 pandemic worse,” said Dr. Franco-Paredes, an infectious disease physician, in a March 22 letter addressed to policymakers, judicial officers, sheriffs, wardens and parole boards.

The number of diagnosed COVID-19 cases in Colorado hit 3,728 on Thursday, though health officials estimate the actual number of people infected with the disease could be between 14,900 to 37,300 cases.

Last week, Gov. Jared Polis issued guidance to sheriffs, judges, prosecutors and public defenders on reducing the jail population, including calling on sheriffs to issue summons and citations in lieu of arrests. The Department of Corrections has also issued a moratorium on new intakes from county jails, putting more pressure on sheriffs to manage their inmate populations.

Even so, the contagion has begun to spread across Colorado’s jails. On Monday, an inmate in Denver’s downtown jail tested positive for COVID-19. On Wednesday, The Greeley Tribune an inmate and four employees in the Weld County jail have tested positive for COVID-19. On Wednesday, Jeff Hopkins, a 41-year-old El Paso County Sheriff’s deputy who worked in the county jail, died of the disease. In other jails across the state, . The Denver Post that jail populations across the state have been dropping by about a third in recent weeks, though there are outliers. In Weld County, for example, the jail population has dropped by about 15%, the Post reports.

The petition filed Friday states that conditions in the El Paso County Jail have seen little change in the daily routines of inmates. Hand sanitizer is not provided (often considered contraband due to its high alcohol content), inmates are still being housed with up to seven others in a single cell with one communal toilet, being transported to and from court in groups, and eating meals in close proximity. In Adams County, the petition states, there is at least one pod in the jail where several people have been coughing and had fevers but none of the inmates were quarantined or tested. Weld County Sheriff Steve Reams has been critical of the COVID-19 response in Colorado, saying on Facebook on March 20: “I understand that nobody wants to catch Coronavirus but statistically, even if you catch it you’re likely to be just fine. What I’m concerned with is our Country catching a huge case of socialism.”

The Colorado Independent has reached out to the Adams and El Paso counties sheriffs’ offices for comment.

A separate petition filed with chief judges on Friday is calling on the courts to allow remote appearances so that defense attorneys can advise their clients over the phone. At least four public defenders have contracted COVID-19 and the fear is that attorneys will bring the contagion into the courts and jails.

“Our courts continue to run,” said Alaurice Tafoya Modi, president of the Colorado Criminal Defense Bar board, in a statement. “Attorneys are on the front-line, still representing those accused and still going to court to advocate on their behalf.”

page dedicated to our reporting on COVID-19 in Colorado. We will continue to report with an eye toward the humanity of our sources and with a commitment to public accountability. Please join our efforts by sending us your story ideas and questions to tips@coloradoindependent.com. And sign up for free to join The Indy’s email list to stay informed about all our reporting. And if you are so inclined, please support our nonprofit newsroom with your tax-deductible donation. We’re burning the candle at both ends. Take good care.