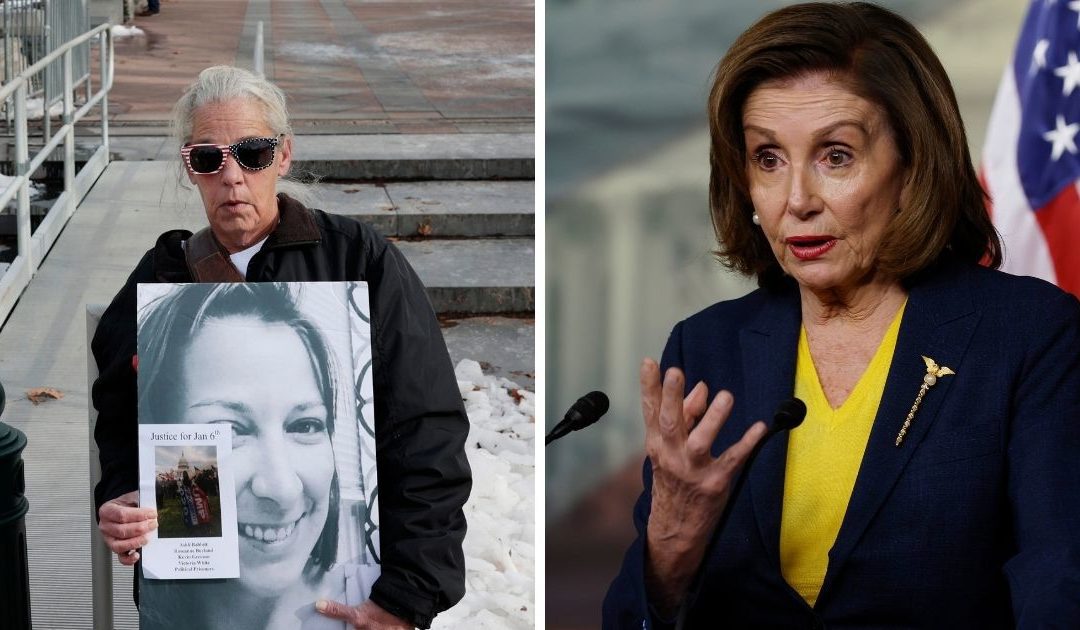 Well, Nancy Pelosi treated the nation’s capital to a political drama spectacular on Thursday to memorialize the 2021 Capitol incursion, featuring everything from a somber candlelight vigil to a performance from the cast of the Broadway hit, “Hamilton.”

The Democratic House speaker, of course, did not seem interested in memorializing the lives lost as a result of the events on Capitol Hill last year as much as making sure that everyone in America remembered what happened that day, the better to shape the narrative with.

Yet someone who cares significantly more about those who died did show up to honor the dead, too — and Pelosi can’t have been all too happy to see who it was.

We’re talking about Ashli Babbit’s mother, one of the survivors of the only person we can say was intentionally killed on Capitol Hill that day — and she is not happy with Nancy Pelosi.

Newsweek reported that Micki Witthoeft went to the Capitol on Thursday to remember her daughter, who was shot by a member of Capitol Hill police when Babbit and a group of protesters broke a window in a corridor near the House chambers and Babbit was climbing through it.

She was unarmed and there is no indication she was being violent, but she has largely been denounced as a terrorist by the left while the officer who shot her was praised as a hero who, in his own words, “saved countless lives” by shooting Babbit.

Witthoeft, along with former President Trump and some of his most prominent allies in Congress, maintains her daughter was wrongfully slain.

On Thursday, she passed out flyers calling for “Justice for Jan 6th” which featured photographs of Babbit as well as Roseanne Boyland and Kevin Greeson, who also died in the chaos that day. Boyland was trampled, and Greeson had a heart attack.

Witthoeft has previously accused Pelosi, a congresswoman to Babbit’s home state, of being responsible for her daughter’s death.

Are the Democrats lying about Jan. 6?
Completing this poll entitles you to The Western Journal news updates free of charge. You may opt out at anytime. You also agree to our Privacy Policy and Terms of Use.
Yes: 0% (0 Votes)
No: 0% (0 Votes)

“My daughter was a California constituent, and Nancy Pelosi not only, I feel like, orchestrated the death of my daughter,” she said this summer.

“The Capitol Police should be held accountable like every other police department in the country,” she also said.

It would have been, of course, entirely fitting for Babbit to be memorialized on Jan. 6 rather than held in infamy by the politically charged left.

After all, Capitol Police officer Brian Sicknick, initially said to have been beaten to death with a fire extinguisher in the tumult that day, actually died of a stroke after returning to the station as his bereaved mother was forced to clarify to the media last year.

The other officers that Pelosi gratuitously memorialized on Thursday simply weren’t killed on Jan. 6.

Yet leftists continue to insist that the event was a horrific and deadly insurrection.

Pelosi tried to have a mock memorial not to honor those lives lost on that awful day, but to resurrect the propaganda that the incident, which cost Babbit her life, afforded the Democrats.

Leftists have been milking every ounce of insanely divisive, partisan propaganda out of the Jan. 6 incursion, as they have so many events that the majority of Americans would likely largely agree upon were they to be addressed sensibly and with appropriate acknowledgment of the moral nuances involved.

I almost feel I’d be insulting your intelligence if I were to explain the glaring double-standard with which they treated the far more destructive, deadly, and widespread riots following George Floyd’s death in 2020

Hopefully, however, this insight is still useful to disseminate: The George Floyd riots and the Jan. 6 incursion were both tremendously helpful to the left’s narrative.

While the majority of Americans were appalled to learn the details and watch the unsettling video of Floyd’s death, the riots gave Democrats a chance to paint their critics as racist simply for criticizing the flaming violence and fiery rhetoric of the hard, progressive left.

Meanwhile, while the majority of Americans were appalled to see over-zealous Trump supporters (…etc.) storming the Capitol to protest the certification of the electoral votes in an election that nearly three-fourths of Republicans think was illegitimate and, at the time, dozens of battleground state legislators wanted to be scrutinized, the incursion gave the Democrats an ideal platform from which to declare that the nation was under siege by Trump’s formidable armies of supposedly “white supremacist” nationalists who tried to overthrow the government.

What’s truly sick is that nothing of the sort occurred — putting aside entirely the conspicuous presence of FBI informants on the scene that day and the fact that Capitol Police knew about a threat weeks ahead of time (*cough*), the admittedly entirely unruly people who did, indeed, break some laws when they bypassed barriers and broke windows to get into the building that day were simply not acting as insurrectionists, seditionists, or traitors.

They’ve not been charged as such, nor have Pelosi and her House January 6 panel managed to prove thus far that anyone inspired an insurrection, despite all their attempts to paint the Trump camp as having done so.

Hundreds of people are facing charges for the role they played in the mayhem and are reportedly being kept in inhumane conditions, the three people who died were among the protesters, Trump and the Republicans as a whole have roundly condemned the attack in no uncertain terms, and the massive spirited and law-abiding attempt to challenge the results of the 2020 election was brutally squashed and subjugated and everyone involved now slandered as traitors to their country.

By contrast, Nancy Pelosi, whose nauseating song-and-dance political theater Thursday was an insult to the memory of Ashley Babbit and the others who died that day, reacted to the Floyd riots by dressing up in African garb and kneeling in solidarity with an allegedly “mostly peaceful” protest movement during which thousands of political radicals, anarchists, and criminal opportunists were vandalizing immigrant- and minority-owned businesses, setting fire to whole neighborhoods, endangering lives, even killing dozens.

Remember, taking the knee isn’t just a tame act of solidarity with advocates for racial justice; it is a gesture that Fidel Castro-sympathizing, now-former NFL quarterback Colin Kaepernick started because he regards our entire country as an irredeemably white supremacist nation.

Pelosi and her fellow virtue-signaling Democrats had no problem, as sitting U.S. lawmakers, publicly signaling their sympathies for decidedly anti-American sentiments as cities were burned in the name of this ideology … and we’re supposed to take them seriously as they promote the narrative that Jan. 6 was an insurrection?!

I don’t know about you, but my prayers are with the families of everyone affected by the George Floyd riots and the Jan. 6 incursion, as well as for a swift end to the deadly game of political theater the left has been playing for far too long.

Seriously, y’all … pray with me.

* All fields are required.


* All fields are required.
The Western Journal is pleased to bring back comments to our articles! Due to threatened de-monetization by Big Tech, we had temporarily removed comments, but we have now implemented a solution to bring back the conversation that Big Tech doesn’t want you to have. If you have any problems using the new commenting platform, please contact customer support at commenting-help@insticator.com. Welcome back!