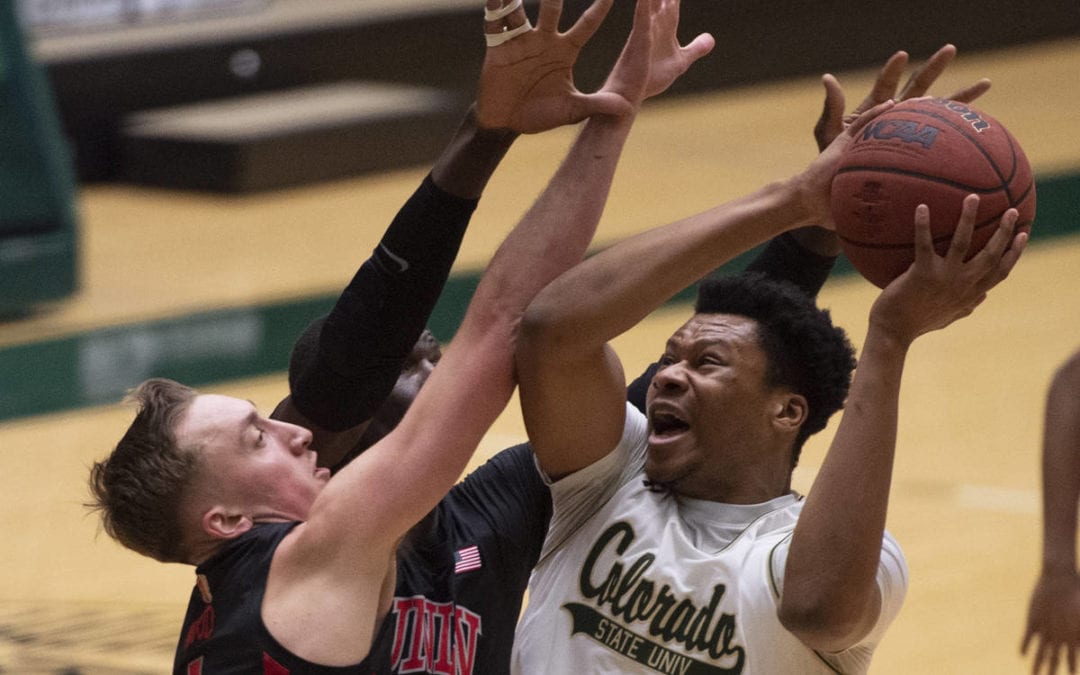 One of UNLV coach T.J. Otzelberger’s biggest concerns coming off a 33-day layoff Thursday night against Colorado State was conditioning.

And the hiatus and 5,000-foot altitude at Moby Arena in Colorado Springs, Colorado, appeared to catch up to the Rebels, as the Rams outscored them 12-2 in the final 4:01 to rally from 13 down in the second half for a 74-71 win.

The teams will complete their two-game series at 1 p.m. Saturday.

“I’m proud of the effort our guys brought. Certainly, we’ve had some challenges,” Otzelberger said. “At the same time, we didn’t come here for a moral victory or a pat on the back. We came here to win the game, and we didn’t get the job done.”

Bryce Hamilton scored 23 points for UNLV in its Mountain West opener, including a baseline fadeaway jumper with 49 seconds left that gave the Rebels a 71-70 lead.

David Roddy answered with a layup for Colorado State (7-2, 4-1 Mountain West), and Caleb Grill then missed a 3-pointer for UNLV. Isaiah Stevens was fouled and made two free throws with 7.3 seconds left, and David Jenkins missed an off-balance 3-pointer from the right wing with two seconds left.

“We had them. I just feel like we didn’t play the whole game,” Hamilton said. “They’re a good team, and they were able to make us pay for our mistakes. That’s when they got the lead and started to win.”

Here are three takeaways from the loss:

The Rebels’ conditioning showed the most in the final four minutes of both halves. Grill scored eight straight points to give UNLV a 34-26 lead with 4:38 left in the first half, but the Rebels didn’t have a field goal the rest of the half and were outscored 8-1.

In the second half, nobody but Hamilton scored a field goal for UNLV after Diong’s layup with 9:49 left, and Hamilton’s fadeaway was the Rebels’ only field goal in the final 4:01.

“Fatigue was certainly a factor,” Otzelberger said. “Late in the game, you’ve got to be really intentional about paint touches and trying to put pressure on the rim. We didn’t do a good job of that.”

UNLV played without point guard Marvin Coleman, who did not make the trip for what the Rebels called “medical reasons.” Otzelberger did not elaborate.

Without him, UNLV wasn’t organized at times, especially on the final two possessions.

Otzelberger said the Rebels had shots from the players they wanted, but neither play was executed perfectly. He wanted to clear out one side of the floor for Grill and have him shoot off a curl instead of launching from well beyond the arc, and Jenkins appeared rushed on the final possession and didn’t get the shot UNLV wanted.

Otzelberger didn’t provide a timetable for Coleman’s return, but said he hopes it will be next week.

The Rebels weren’t the first team to be chased down in the final minutes by Colorado State.

In the Rams’ first game against San Diego State last week, they set a Mountain West record by overcoming a 26-point deficit in a 70-67 win Saturday.

The Aztecs rebounded to win the second game of the series 78-65 on Monday.