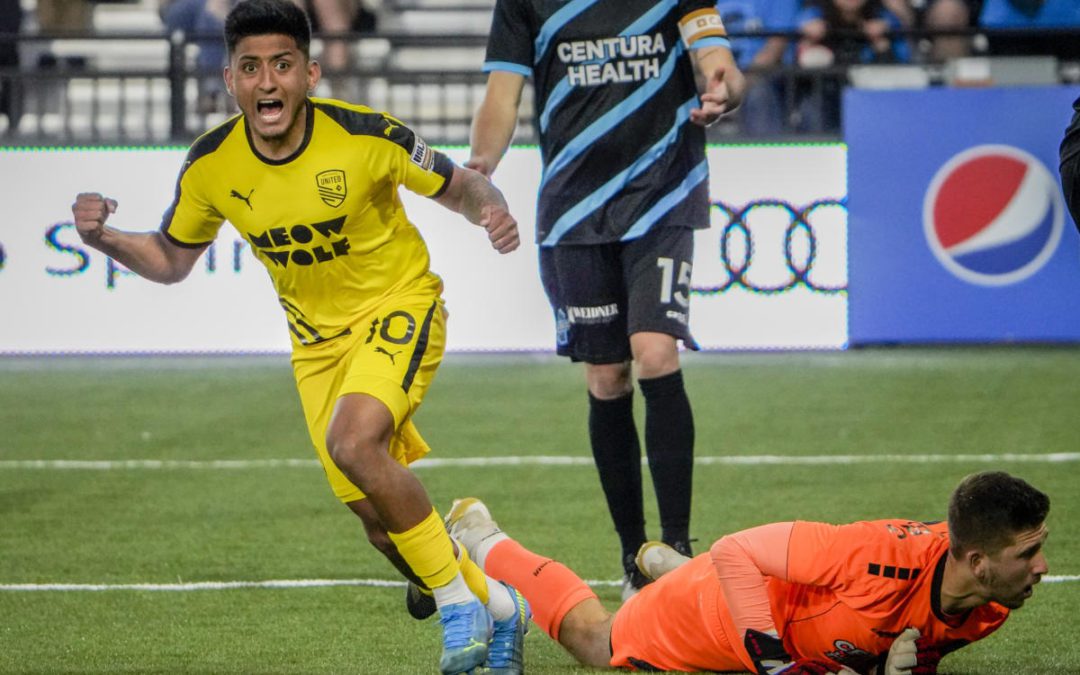 COLORADO SPRINGS — Who invited these guys?

New Mexico United threw cold water on the opening-night festivities in Colorado Springs on Friday night, playing most of the second half short-handed but pulling out a dramatic 3-1 victory over host Switchbacks FC.

Sergio Rivas, Amando Moreno and Daniel Bruce banged in goals for United, but it was the visiting team’s defense that spoiled things for an announced crowd of 5,600 attending the first regular-season match at the new downtown Weidner Field.

New Mexico led 2-1 after Moreno scored in the 49th minute, but Andrew Tinari picked up his second yellow card of the match six minutes later. United (2-1-1) had to play a man down the rest of the way, fighting off numerous dangerous Switchbacks scoring chances.

“It’s hard to describe how proud I am of the group under these circumstances,” NMU coach Troy Lesesne said. “With the crowd here and the opening of the stadium and then going down a man, it’s tough. But we were able to stick together and see the match through. Outstanding effort.”

It was the second straight win for NMU, which had a rowdy group of its own fans celebrating in the stadium’s northeast corner. The fans saw some outstanding work by United goalkeeper Alex Tambakis and his back line.

Lesesne made several substitutions in the second half, including bringing in striker Devon Sandoval and midfielder Micheal Azira, to help fight off the man disadvantage. Azira smiled when asked about his team’s gritty performance.

“To me, it’s all about character,” Azira said. “We rely so much on each other, and playing 35 minutes down a man is not easy. But winning here was nice for us. We needed the points, and you always want to get as many as you can on the road.”

United was not able to rest easy until the final seconds of stoppage time, when Bruce broke free behind Colorado Springs’ back line and banged home a clinching goal. The stadium lights went out less than a minute later to allow a planned post-match fireworks show to begin.

“That goal was a dagger,” Azira said. “That was just icing on the cake.”

Colorado Springs (1-2-0) actually triggered a brief fireworks display much earlier, scoring the first Weidner Field goal in the second minute of play. Hadji Barry, who scored two goals in the Switchbacks’ win over Sporting Kansas City II a week prior, got free just to the left of United’s goal and blasted a low shot into the right-side netting.

But the home side’s lead did not last long. Rivas found himself alone just outside the Colorado Springs box after a deflected cross from Harry Swartz bounded to his feet. Rivas launched a rocket into the net to even the score. It remained 1-1 to halftime.

The visitors took the lead shortly after intermission when Brian Brown curled a ball in front of the net for Moreno, who promptly knocked it home to set off a celebration in the United cheering section. The fans would be front and center for the rest of the match as Tambakis and the defense fought to make their lead stand up.

“Having all those friendly faces cheering us on definitely made a difference,” Lesesne said. “It was great to have them follow us up here. They were a big part of this win.”

As one might expect, the Switchbacks finished with advantages in possession (58%) and shots (12-9), but New Mexico managed to avoid giving the home team many quality looks. Tambakis was forced to scramble for a few stops and deflections, and Barry fired wide on a rare open look in the 82nd minute.

“Once we were down a man, we were always going to give up a few chances,” Lesesne said. “That’s unavoidable. But I really thought we did a good job keeping control. We had to turn our substitutions to the defensive end tonight and those guys adjusted and did a great job. They definitely earned this one.”