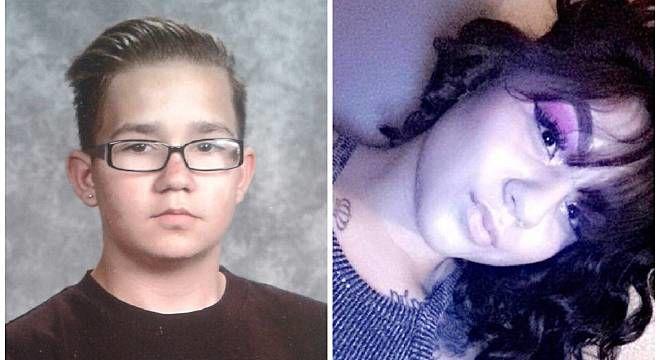 A man who once faced the death penalty in the 2017 roadside executions of two Colorado Springs teenagers was sentenced under a plea bargain Monday to 30 years in prison.

Marco Garcia-Bravo, 34, reacted in silence as his penalty was imposed during a tearful hearing — the end of a four-year prosecution slowed by the coronavirus pandemic and nearly derailed at trial by a jury that largely rejected key parts of the case against him.

“I don’t think it’s justice, but it’s the only justice that we’re going to get with Mr. Garcia-Bravo’s case,” said Tamara Partida, the mother of 16-year-old Natalie Cano-Partida, who was gunned down at point-blank range alongside 15-year-old Derek Greer.

Addressing the courtroom by phone, Greer’s mother, Heather Ferguson, called the penalty “unfair” to her son, a “great kid” who she said was kind to everyone.

“He was the reason I loved,” she said.

While Garcia-Bravo will one day be free, “I will never have a fully happy day in my life,” Ferguson added.

The names Natalie and Derek are carved into two crosses at the scene of a double murder on Old Pueblo Road, south of Fountain. About 70 solar lights light up the location where Coronado High School students Natalie Cano-Partida and Derek Greer were shot repeatedly execution style on March 11, 2017. The photo was taken in March 2018. (Photo by Jerilee Bennett, The Gazette)

Initially charged with first-degree murder and accused of serving as one of two gunmen, Garcia-Bravo instead pleaded guilty to conspiracy to commit two counts of second-degree murder. The charge required him to admit that he helped plot the deaths, falling short of the original allegations, legal observers say.

The 30-year sentence was part of the defendant’s deal, leaving 4th Judicial District Judge David A. Shakes without an alternative as he accepted the guilty plea at both sides’ request. Shakes choked up and reddened in his face as he imposed the penalty.

The move averted a retrial set to begin Wednesday after Garcia-Bravo’s first trial ended with a hung jury in February.

The defendant is the last of 10 people to be convicted in what authorities called a revenge plot by the South Side Soldados, whose members had allegedly suspected Cano-Partida of helping a rival street gang plan back-to-back shootings targeting them. Greer was targeted for being with Cano-Partida on the night of her kidnapping. Neither had anything to do with gang attacks, authorities said.

The teens were abducted from a party in Colorado Springs, driven to a remove location near Fountain, and made to kneel for execution-style shootings after begging for their lives.

Garcia-Bravo declined to address the court, firmly telling the judge “No” with his mask drooping below his nose. No one spoke in his support, and one of his attorneys limited her comments to asking the judge to accept the plea bargain.

The jury at Garcia-Bravo’s mistrial found him guilty of a single count of accessory to murder, the lowest charge he faced. On seven other counts, jurors split 11-1 in favor of acquittal, according to discussions in court, and the jury forewoman later complained that prosecutors had wasted their time.

The other suspected shooter, Diego Chacon, is serving a 65-year sentence after pleading guilty to two counts of second-degree murder.

To relatives, Garcia-Bravo’s sentence marked a stunning turn from early promises that Garcia-Bravo would face a death penalty or, possibly, a life term in prison if he were convicted.

Prosecutors instead abandoned their bid for a capital case after Colorado banned the death penalty in 2020, and the attempt for a life sentence died with the mistrial.

In remarks to the court, prosecutor Deborah Pearson didn’t explain the factors that led the prosecution to approve the deal. The plea bargain took shape last Thursday after a daylong settlement conference overseen by Chief Judge William Bain and Judge Chad Miller. Pearson acknowledged it fell short of the office’s expectations, however.

“I agree with the words that it’s not enough,” Pearson said. “But it is a resolution that will protect our community for a period of time.”

Members of the prosecution team left court without commenting.

One of them, Michael Fisher, has resigned from the office and leaves later this month. Another, Donna Billek, was demoted by newly elected District Attorney Michael Allen during the trial’s final stretch.

Howard Black, a spokesman for the District Attorney’s Office, called it a “heartbreaking” outcome and said the case was strained by the nature of the witnesses, many of whom were involved in the plot. Attorneys for Garcia-Bravo argued he was innocent and that the allegations against him were manufactured by people trying to evade justice for their own roles.

Garcia-Bravo received 1,473 days credit for time served awaiting trial. The time he actually serves behind bars will also be shortened by good- and earned-time benefits behind bars, the judge said.

Relatives of both victims said the deaths of Greer and Cano-Partida permanently rocked two families.

The trauma of Greer’s loss led to two other deaths in Ferguson’s family, she said.

Ferguson’s father died of a “broken heart” from guilt over having driven Greer to the party from which he was abducted, she said. Her sister developed blood clots, but didn’t seek medical help because — in grief for her nephew — “she wanted to die.”

“I am really, really floored that after four years it went from a death penalty case to this,” she said.

In comments to the court, Tamara Partida spoke of her daughter’s “horrifying” last moments, as she was held at gunpoint with Greer in the back of a car while their abductors hunted for an execution site in the dark along Old Pueblo Road.

Although she put on a tough exterior, Natalie Partida was unsure of herself, her mother said. She didn’t even like driving on dark roads.

“I just know she was probably terrified as she drove out to her doom,” Tamara Partida said.

Tamara Partida thanked the the lone juror who kept the panel from acquitting Garcia-Bravo of all counts of first-degree murder.

Partida called her “a small lady with a big heart who really stood her ground and saved us from letting a dangerous person just walk away.”

The juror, who hasn’t been identified, told the judge she felt like she was being “held hostage” by other panelists after 10 days of deliberations. Her comments led the judge to grant a mistrial, setting the stage for Garcia-Bravo’s guilty plea.