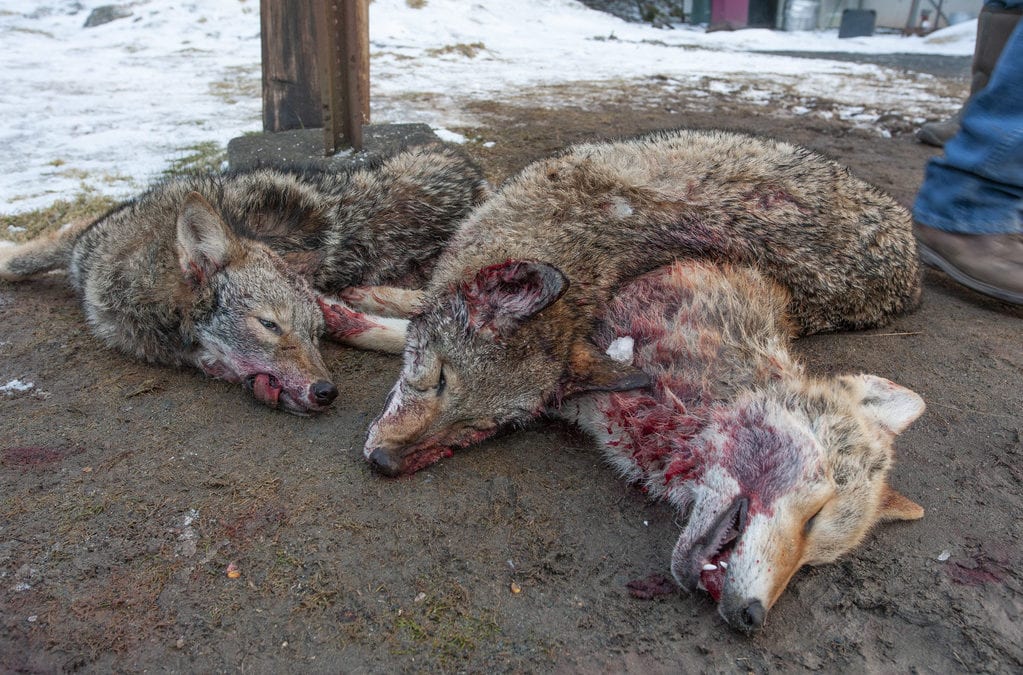 Altogether 118 coyotes were killed and $10,000 handed out in cash prizes. The biggest winner took home a cash prize of $2,000 for killing the heaviest animal, Photo by the HSUS

Our latest investigation into a New York State wildlife killing contest gives Americans another grisly glimpse into a world of shocking animal cruelty: one where coyotes, including heavily pregnant females, were lured to their death using bait and digital calling devices, their bodies mutilated and then disposed of in dumpsters.

The contest, held over the weekend of February 7 to 9, was organized by the Federation of Sportsmen’s Clubs of Sullivan County in New York. In a frenzy of killing, 636 people from New York and five neighboring Pennsylvania counties competed to kill the most and the heaviest coyotes.

Altogether 118 coyotes were killed and $10,000 handed out in cash prizes. The biggest winner took home a cash prize of $2,000 for killing the heaviest animal: a 50.3-pound female whom he lured with bait.

This contest is billed as one of the largest in the Empire State. Like all wildlife killing contests we have investigated so far, including two in Maryland that we recently exposed, it exists in a bizarre universe in which animal cruelty is celebrated and rewarded rather than shunned.

Participants employ modern technology like digital calling devices and expensive night scopes to locate and kill the animals, and then participate in gruesome and archaic rituals. For instance, to discourage cheating by bringing the same coyote in twice, two toes from each dead coyote were cut off upon arrival.

Another participant, referring to a heavily pregnant female killed in the contest, observed, “She might be right full of babies too, you know?” He added that an obviously pregnant female coyote had been cut open at the event and “…the babies already had hair on them – they were ready ya know…”

Most Americans would not stand for such cruelty, but there are hundreds of such contests held all across the United States each year. We have made it our mission to close down each one of them. Our undercover investigators have already exposed similar events in New Jersey and Oregon, in addition to New York and Maryland. In 2018, we documented the heartbreaking results of the Bark at the Moon Coyote Club’s New York State Predator Hunt in Macedon, New York. We focused on New York again this time because the state is second only to Pennsylvania in all of the eastern United States in the number of these kill fests that it hosts each year. While participants try to rationalize the killing by claiming that they are keeping coyote populations in check, scientists and even state wildlife agencies have stated time and again that the contests provide no credible wildlife management service. Wild carnivores like coyotes and foxes regulate their own numbers according to available habitat and prey, and the random and mass killing of these animals does not prevent conflicts with livestock, people or pets. On the contrary, it can actually lead to an increase in coyote numbers in the long run by disrupting their stable breeding structure, and opening up space and resources for new coyotes to come in.

The New York State Department of Environmental Conservation points out that randomly killing coyotes will not result in an increase in the numbers of deer for hunters. A recent research study covering New York and other eastern states also found that coyotes are not adversely impacting deer populations in that region.

In New York too there is now a bill in both the Assembly and Senate, introduced by Assembly Member Deborah J. Glick and Sen. Monica R. Martinez, that would put an end to this senseless killing. If you live in New York, please contact your state legislators and urge them to swiftly pass this important bill. And if you live in a state where wildlife killing contests are held, please download our toolkit “Wildlife Killing Contests: A Guide to Ending the Blood Sport in Your Community,” and contact your HSUS state director to get involved. There’s growing momentum to end these outdated and inhumane contests; let’s work together to send them into the pages of history as soon as possible.