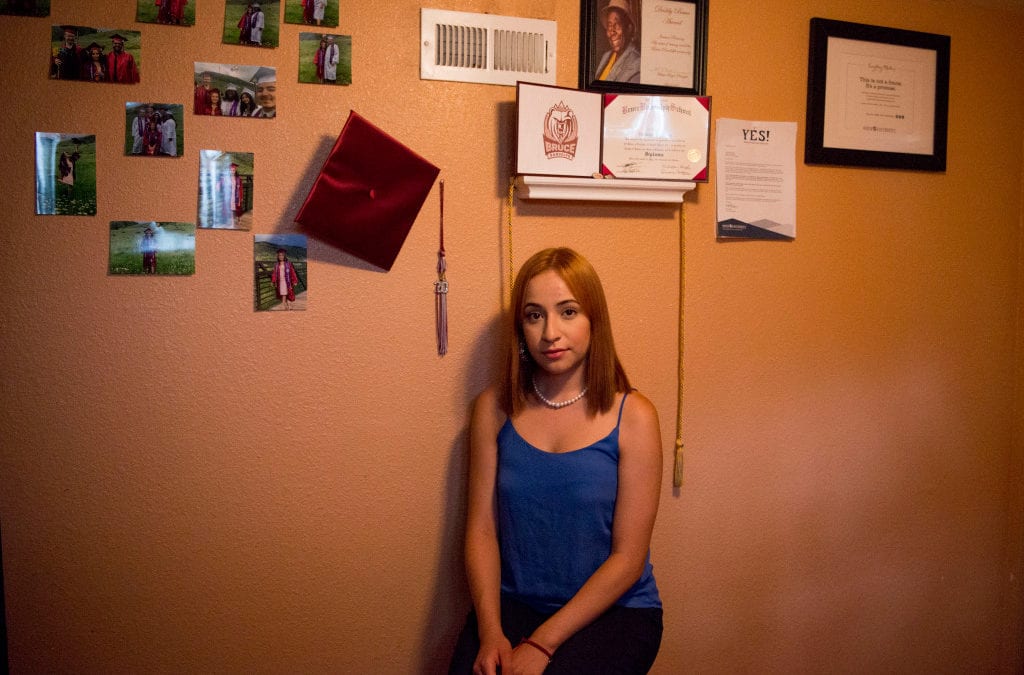 When schools in Colorado let out for summer break, it’s typically that: a break. By early June, school administrators have solidified the next year’s budgets and educators have finalized their schedules. Parents, students and faculty have a good idea of what’s to come when classes resume in late summer.

But since the coronavirus pandemic threw the spring semester into disarray, abruptly ending in-person classes in March and forcing school districts across Colorado to move education entirely online, this year is proving to be anything but typical. Uncertainty looms over nearly every piece of the state’s school system as planning proceeds for a very different fall semester.

In an effort to continue slowing the spread of COVID-19, some of Colorado’s largest school districts are considering hybridized learning approaches, with a mix of in-person and virtual classes, that will not only reduce the number of students in each classroom but the number of days they’re able to be in their physical school buildings.

Educators are reconfiguring classrooms, passing-period schedules and lunch-hour protocols to meet new public health guidelines that seemingly change week to week, and will likely continue to do so as experts warn of the potential for a second surge in coronavirus cases come fall. Many parents are debating whether or not to send their kids back to school at all given the unknowns, especially the impact these unusual circumstances could have on mental health.

Meanwhile, the legislature in a late, coroanvirus-delayed session cut $577 million from Colorado’s public education budget, compounding the state’s school funding deficit to more than $1 billion since the Great Recession.

Parents, educators, administrators and students want a return to school in its traditional format this fall, but are grappling with the new realities imposed by a global pandemic. The more than a dozen people interviewed for this story said it’s a delicate balance trying to weave a sense of normalcy into the school year and ensure the safety of students and faculty.

They’re all bracing for what could be the most unusual school year they’ve ever experienced.

“We are trying to walk the line of making responsible choices without necessarily living in fear too much,” said Marissa Ellis, who lives in Aurora with her husband, Jason, and three children. The Ellis’ twin 5-year-old boys, Graham and Oliver, are supposed to go into kindergarten in the fall, but the family is considering waiting a year before sending them back to a public school.

“I don’t want to subject them to things psychologically, in terms of masks and whatever else, that I feel like is going to do more damage than having them home for an extra year,” Marissa said, citing the kids’ age as a luxury in these uncertain times. “It’s a hard decision.”

Creating a safe space at school

School officials are working closely with public health experts to develop new procedures for reopening schools safely this fall, addressing everything from sanitation practices to bus schedules. Gov. Jared Polis has not explicitly given schools the green light to reopen, but said in a meeting with the Colorado Department of Education last week that he’s optimistic they will be able to.

“Most likely, and I express a strong sense of optimism, most schools will be back largely in a normal way and largely in a regular fashion,” Polis said. “I use the words ‘mostly’ and ‘largely’ because that’s not going to be universal.”

Though many metro-area districts are pursuing hybrid learning plans, Westminster Public Schools last week announced it will resume in-person education five days a week throughout the district, with “as close to normal as possible” an experience supplemented by additional safety protocols, such as social distancing.

While school officials are preparing now, many admit they may have to make changes come fall should guidelines change.

“One of the things we have learned from the past three months is the importance of being able to be flexible and to adapt as new information becomes available,” said Susana Cordova, superintendent of Denver Public Schools.

DPS, Colorado’s largest district with more than 93,000 students, recently proposed strategies to reduce the number of people in school facilities each day. Plans include dividing students into “A” and “B” groups to rotate between in-person and online classes. Groups would alternate attending school in-person either two back-to-back days, every other day, or four consecutive days every other week. The days students are not physically in school, they would supplement with a virtual curriculum. All the plans account for having one day reserved for high-priority students.

Cordova said plans came together with input from district principals and teachers.

“The option that all of us would like that we unfortunately are not at a place where we can implement is just normal school,” said Cordova. “But given the health guidelines around needing to implement social distancing, around needing to make sure that we are maintaining classroom ratios of 15 people in a room, it doesn’t allow us to have all our kids back at one time.”

Other protocols include potentially eliminating passing periods by keeping students in one classroom all day, including while they eat lunch, and requiring temperature and symptom screenings upon arrival at school each day. While state guidance mandates teachers to wear masks while conducting class, DPS is considering requiring students to wear them as well.

While these new procedures are necessary, they also raise logistical concerns. For example, it’s unclear who would be conducting daily health screenings or where they would take place, said Tiffany Choi, president of Denver Classroom Teachers Association, a union for DPS employees. Teachers in the district are also entitled to a duty-free lunch, which is “possible, but challenging” if students are eating in a classroom, she said.

Amie Baca-Oehlert, president of Colorado Education Association, the state’s largest teachers union, said something as simple as wearing a mask could also impact learning. Primary school educators who are teaching students to read use their mouths to show students how to sound out words, she said. Many teachers are also parents and need to consider how to support their kids at school as well as their kids at home.

“It’s like an onion, and there’s layer after layer of logistical challenges,” Choi said, adding budget constraints will only exacerbate these issues. “We were severely underfunded before COVID. To ask teachers to do what they were doing before with less, it’s sort of absurd.”

When the novel coronavirus shuttered schools this spring, teachers and students had to quickly transition to virtual platforms so they could continue education online. The move happened with varying degrees of success, families said, and proved the need for a more cohesive and thoughtful approach to online learning.

That’s especially important as administrators look to integrate remote learning as a way to comply with public health guidelines limiting the number of people in a classroom. Additionally, many parents are contemplating full-time online education this year to avoid risking their family’s health.

Jason Glass, superintendent of Jeffco Public Schools, said interest in the district’s online alternative has increased substantially. In years past, virtual learning accounted for about 1% of the student body.

“We’re expecting between 10% and 20% of our students will want an all-remote learning environment, at least to start the year,” Glass said. “In our case, that’s going to be somewhere between 8,000 and 15,000 students that are going to want remote learning. That’s like standing up a complete other school district.”

Denver resident Lisa Beaton, who has two sons ages 4 and 6, had been strictly limiting her children’s screen time until she began schooling from home. Her kindergartener, Luke, attended several Zoom classes each week and had about four hours of work to complete independently every day, she said.

Between maintaining her full-time job as program manager for a mental health center, taking care of her younger son and trying to substitute as Luke’s teacher, she found the workload unmanageable.

“I have a 6-year-old who’s just learning how to read. What that means is he doesn’t know how to pick up a worksheet and know what to do,” Beaton said. “Everything took me doing it with him, so it was very overwhelming.”

Online schooling also yielded mixed results for Julian Kesner and his family. Kesner’s 7-year-old daughter, Cecilia, attended first grade at a private school in Denver, and while he could tell she enjoyed seeing her classmates on periodic video meetings, her work only ate up about two to four hours each day.

“It was better than nothing,” he said. “It’s also no substitute for in-person learning.”

A loss of community

Academics are just one aspect of the school experience. which also helps kids develop socially and emotionally. Dino Reyes, dean of culture at Denver’s Lake Middle School, said he’s worried about losing some of the community-focused school activities, such as weekly assemblies and team sports, that help students build relationships.

When Reyes hosted school-wide assemblies, he usually focused the theme on a value or virtue. On the last Friday of each month, students voted for their classmates who exhibited those values to be “knighted,” or celebrated publicly and given a jacket as an ode to the school mascot, the Lake Knights.

“To think we don’t have that makes me really, really sad,” said Reyes, who also coaches middle school football and basketball. “As far as my role in helping build culture, the athletics department is something we want to prioritize and the students need that. There’s so much character building that goes into that.”

Forming relationships is an essential part of the job for Samantha Garcia, a college advisor at Bruce Randolph School in Denver. This spring, she pivoted to using text messaging and video chat to help students apply for college and scholarships. Those mediums only worked because she had previously earned their trust in a face-to-face setting, Garcia said.

All of these variables weigh heavily on the mind of 18-year-old Jasmine Ramirez. She recently graduated from Bruce Randolph School, but because of the pandemic, was not able to walk across a stage during her graduation ceremony, which instead took place via Zoom. She plans to attend Denver’s Regis University in the fall to study criminal justice, but called the mix of in-person and online classes “not desirable.”

Ramirez wants the full college experience and is most looking forward to forming close bonds with her new teachers. But because she will be living at home, she’s also scared of unknowingly bringing the virus back to her family.