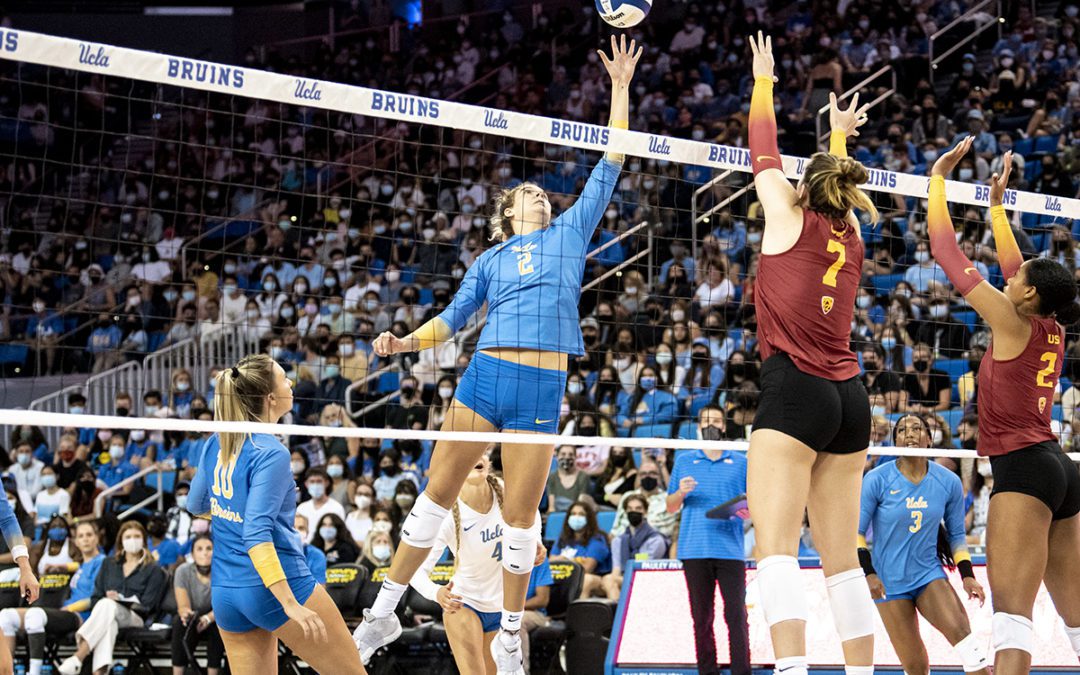 The Bruins hosted their own block party.

UCLA finished with nine blocks on the night and was paced by redshirt sophomore middle blocker Anna Dodson’s five.

“We don’t need to be a great blocking team,” Sealy said. “Blocking numbers are never going to be a focus of ours.”

Playing against her home state team for just the second time, Dodson – a Fort Collins, Colorado native – said the team stuck to its normal lineup to stifle Colorado’s hitters.

“We really just went out and decided that we were going to block them,” Dodson said. “I don’t think that was (a personnel change). I was really just taking care of the ball and pulling our assignments.”

The victory marked the return of freshman outside/opposite hitter Charitie Luper. After missing the Bruins’ last two road matches in Washington, Luper started and appeared in all three sets for UCLA en route to eight kills for the game, the second most on the team.

McCall absorbed a chunk of the team’s offense and defense, logging four kills to go with nine digs and a block.

“We’re still trying out new lineups,” McCall said. “We don’t have a set (lineup) when we’re trying new things to find consistency. I think that’s why there’s been different pins on both sides.”

To open the match, the Bruins tailed the Buffaloes, with no team possessing a lead greater than one for the first 13 points. In that stretch, the blue and gold picked up two more kills and blocks combined than errors.

A kill and a pair of Colorado errors would break the scoring seesaw and give UCLA a lead it would not relinquish for the remainder of the set.

The Buffaloes jumped out to an early 2-0 lead in the second set, courtesy of a blue and gold attacking error. But the Bruins would claw back to close the margin and take the lead with a string of kills and blocks – the latter amounting to two Colorado attack errors.

UCLA’s run would be short-lived, however, after senior defensive specialist/libero Kelsey Campeau sent a serve out of bounds. The Bruins would exit the court with a game-high nine service errors, extending the team’s streak of picking up more service errors than aces in matches to 10.

Sealy said, like with his team’s blocking total, he isn’t concerned about the number of service errors.

“The matches you serve tough, you make errors,” Sealy said. “You can miss a bunch of serves and still score a lot of points.”

Despite the free points, the Buffaloes were unable to churn out offense of their own, giving up a 71.4% sideout percentage to the Bruins. Colorado finished with 28 total kills on a .157 hitting percentage – only six kills more amid a lower hitting percentage than graduate student outside/opposite hitter Mac May had on the evening.

UCLA would post fewer errors in the final two sets than Colorado and completed the sweep by racking up more kills in every frame of the match.

Every offensive member of the Bruins’ starting lineup would finish the match with multiple kills and a hitting percentage above .350.

“I know I can rely on anyone at any moment,” McCall said. “It just doesn’t feel stressed or super tense out there. It just feels like another day.”