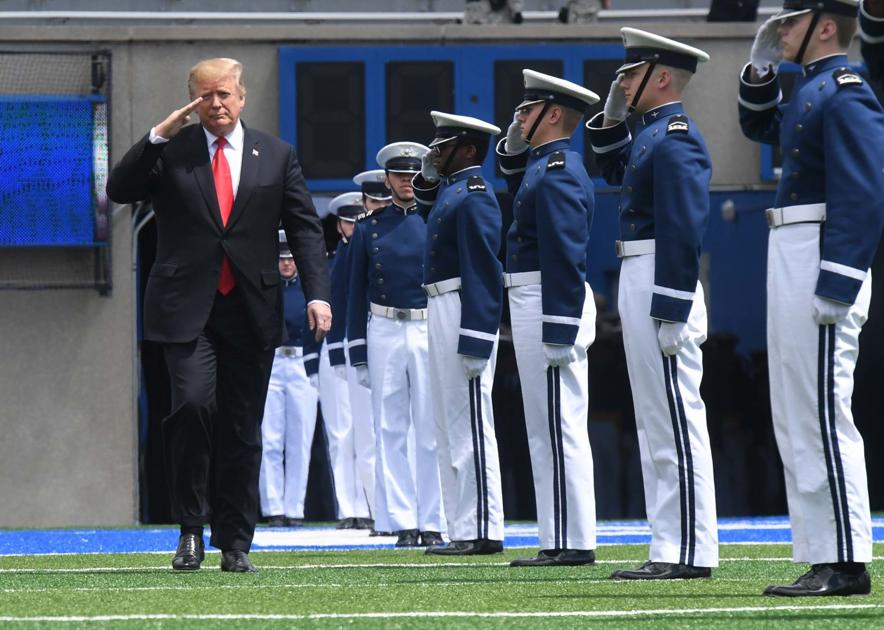 Like much of the military’s history in Colorado Springs, the story of U.S. Space Command and the new Space Force service branch starts at The Broadmoor.

The Broadmoor is where Colorado Springs leaders first hatched a plan to buy up ranchland that became Fort Carson and where they plotted to win the Air Force Academy.

This time, it was was a breakfast speech by Alabama Republican U.S. Rep. Mike Rogers at the Space Symposium in 2017 that lit the fuse.

“My vision for the future is a separate Space Force within the Department of Defense, just like the Air Force, which had to be separated from the Army in order to be prioritized and become a world-class military service,” Rogers told an audience of military brass and industry insiders. “Simply put, space must be a priority and it can’t be one if you jump out of bed in the morning thinking about fighters and bombers first.”

At the time, Rogers’ speech was something the Pentagon tried to ignore. Top leaders said a new service would just create more bureaucracy and cost more money.

But Rogers and his colleagues in Alabama’s delegation quickly gained the only ally they would need: President Donald Trump.

Trump surprised his defense leaders with a March 2018 speech in California that embraced Rogers’ plans.

“My new national strategy for space recognizes that space is a warfighting domain, just like the land, air and sea. We may even have a Space Force — develop another one. Space Force. We have the Air Force, we’ll have the Space Force. We have the Army, the Navy,” Trump told a crowd. “You know, I was saying it the other day, because we are doing a tremendous amount of work in space. I said maybe we need a new force. We’ll call it Space Force. And I was not really serious. Then I said what a great idea. Maybe we’ll have to do that. That could happen. That could be the big breaking story.”

While Colorado Republican lawmakers had been tepid to the Space Force idea, they embraced it when Trump’s endorsement gave it traction.

“A separate service dedicated to space is the type of dramatic initiative that will enhance the U.S.’ ability for our qualitative military edge in that domain,” Colorado Springs Republican U.S. Rep. Doug Lamborn said in June 2018. “For too long, too little emphasis has been placed on space defense.”

Space Force still faced opposition, but an interim step got wider support. In 2018, lawmakers authorized the reestablishment of U.S. Space Command, which was started in Colorado in the 1980s, but was shuttered in a 2002 cost-cutting move.

And the new command would get its start in Colorado Springs.

“This is fantastic news for the Pikes Peak region and all of Colorado,” Lamborn said.

The Pentagon by March 2019, had narrowed down finalists to house the command, with Colorado leading the pack.

But, without explanation, the Pentagon kept delaying the decision.

Trump was expected to say something about the basing decision when he spoke at the Air Force Academy’s 2019 graduation, but he stayed mum on the topic.

Meanwhile, lawmakers in both chambers signed off on the creation of the Space Force as Pentagon opposition faded as Trump’s support for the idea only grew.

The service would include 13,000 satellite troops and is headquartered in the Pentagon. But even as the Space Force launched, U.S. Space Command didn’t have a permanent home.

In early 2020, Colorado went on the offensive, lobbying Trump hard as he made a February campaign stop in Colorado.

The president said he would personally decide which state got the command.

In May, the Air Force announced it would formally reopen the race to house space command, scuttling its earlier list of finalists and opening the contest up to cities nationwide.

But the Pentagon threw Colorado Springs a big bone, announcing in May that it would be provisionally housed at Peterson until at least 2026.

The Colorado General Assembly came up with highway money to improve roads around Colorado Springs bases and launched an unmatched program allowing military spouses to transfer their professional licenses here.

Colorado Springs came up with a package of gifts to offer the Air Force, pledging more land for Peterson, a program to train space workers and more. The incentives would add up to more than $130 million.

But as the election season ended with Gardner’s defeat, local officials began to privately worry that the White House could pass Colorado by after Republicans had a poor showing at the state’s polls.

“You have to look at the fact that Colorado has not treated Trump favorably at all, while he has been very popular in the South, and Alabama in particular,” explained Bob Loevy, a Colorado College political science professor emeritus. “As president, it is his call, though I think it (the decision) was done to reward political supporters in the South and Alabama and not doing any favors to a state that rejected him fairly thoroughly — he lost in Colorado to both (Hillary) Clinton and (Joe) Biden.”

Alabama’s bid, which included incentives, too, was backed by lawmakers who enthusiastically supported Trump, including his bid to overturn his election loss to Joe Biden.

One of the president’s strongest backers was Huntsville Republican U.S. Rep. Mo Brooks.

At a Jan. 6 pro-Trump rally that preceded rioters storming the Capitol, Brooks whipped up the crowd.

“Today is the day American patriots start taking down names and kicking ass,” he said.

A week later, going against recommendations from military advisers who wanted the command to stay in Colorado Springs, Trump awarded Space Command to Huntsville.

The White House hasn’t responded to wide criticism of the decision from Colorado leaders.