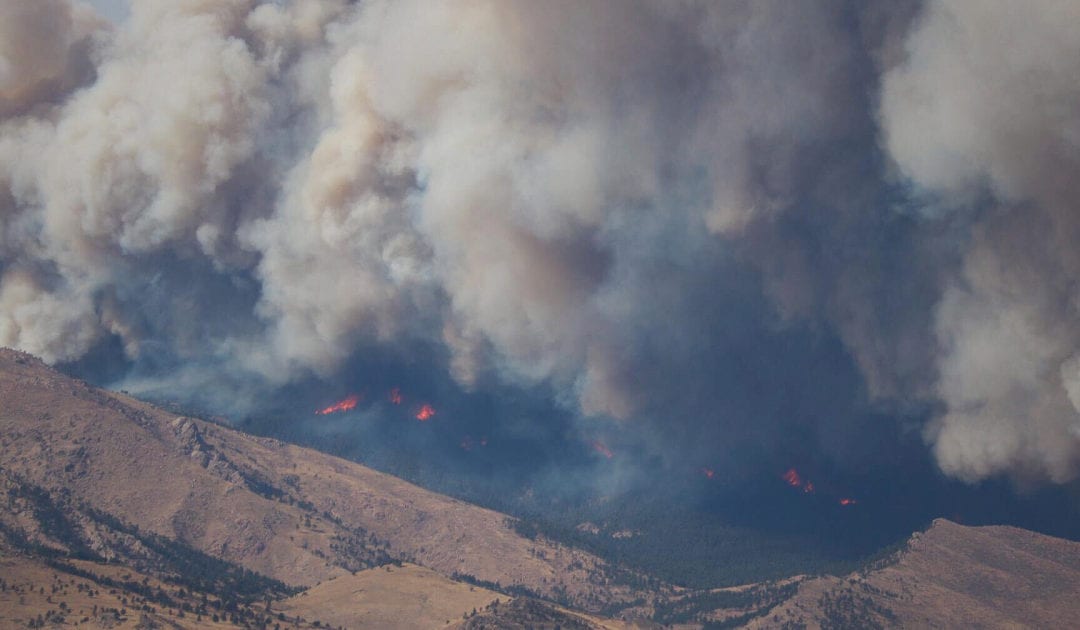 The U.S. Forest Service on Wednesday will temporarily close lands in five Front Range-area counties because of extreme fire conditions in Colorado and blazes that continue to rage across the state.

The agency said access to lands inside three districts of Arapaho and Roosevelt National Forests will be limited in Clear Creek, Jefferson, Gilpin, Boulder, and Larimer counties starting at midnight on Wednesday. The closure stretches from the Wyoming border to south of Idaho Springs. Officials say it’s not clear when they may reopen, though the order lasts through at least Nov. 15.

“This decision will be re-evaluated daily as conditions change,” the Forest Service said in a news release.

The Forest Service says the areas that are being shuttered are experiencing severe drought, low fuel moisture conditions, a high occurrence of human-caused fires and persistent fire-danger weather.

While Colorado’s national forests have seen record-setting traffic this summer, the unprecedented closures announced Tuesday are “entirely related to the number of new fire starts and the explosive growth of fires we are seeing,” Reid Armstrong, with the Arapaho and Roosevelt National Forests said, noting that the Cal-Wood fire in Boulder County raced over 7,000 acres in a day.

By Tuesday, the fire had grown to nearly 9,400 acres as the Lefthand Canyon fire a few miles west had charred 470 acres.

Forest Service officials know the closures will prevent people from getting out into their public lands, Armstrong said, “but we just can’t afford to have a new fire right now.”

“As much as people want to do the right thing, 90% of fires are human caused,” she said. “With the extreme drought conditions we are seeing, all it takes is a hot muffler or dragging chains or a dropped cigarette to start another large fire.”

MORE: Coronavirus has led to record crowds on Colorado’s public lands and plenty of “knucklehead” situations

A wildfire that exploded Monday afternoon near the Ice Lakes trailhead in the San Juan National Forest required a daring helicopter rescue of 23 hikers and three dogs. By Monday night the Ice Fire had grown to 320 acres around Mineral Creek west of Silverton.

Federal forest officials also conceded that they have limited capacity to respond should another fire ignite.

“The number of large fires and extreme fire behavior we are seeing on our forests this year is historic,” Arapaho-Roosevelt Forest Supervisor Monte Williams said in a written statement. “These temporary closures are necessary to protect the public and our firefighters, and we will keep them in place until conditions improve and we are confident that the risk of new fire starts has decreased.

“I ask all of our local residents and visitors to take these closures and evacuations seriously to allow our firefighters to focus on the mission of safely suppressing the existing fires,” Williams wrote.

Forest Service land is part of the Coloradan way of life. It’s where people hike, run, bike, snowshoe, ski and snowboard. During the coronavirus crisis, Coloradans have flooded to public lands seeking relief from being cooped up.

The closures on the Arapaho-Roosevelt National Forests cover the Eldora and Loveland ski areas. Loveland, which opened on Oct. 25 last year, has been making snow for several nights and it is unclear if the closure could delay opening plans for the ski area on the Continental Divide.

Loveland spokesman John Sellers said the ski area “has a ways to go” before opening. “At this point, I don’t think this is going to affect our opening day,” he said. Eldora is not set to open until Nov. 23.

Armstrong said the forest would be offering exemptions to the closure order “on a case-by-case basis.”

“And an example would be Loveland getting ready for winter operations,” she said.

Colorado Parks and Wildlife on Tuesday began reaching out to hunters impacted by the closures. The second rifle season begins Saturday and the closures in Boulder, Gilpin and Clear Creek counties affect hunters with tags in the popular Game Management Units 29, 38 and 39. The agency reached out via email with instructions for how hunters could get refunds. The agency has already been giving refunds for big game hunters with tags in nine units due to closures for the 205,004-acre Cameron Peak Fire.

Forest Service officials are watching to see if hunters and campers simply move their outdoor adventures to other areas.

Lisa Stoeffler, the acting supervisor of the 2.3 million-acre White River National Forest — the most visited national forest in the country — said her team is preparing for an uptick in traffic as other forests close.

“We are trying to staff up a bit but everyone’s resources are pretty stressed right now,” she said, noting that the White River is ramping up its education on sweeping fire restrictions that limit all open flames in the backcountry. “It is still critically dry out there and we need people to remember that.”

Violators of the order closing the Forest Service land face a fine of up to $5,000 and/or up to six months in prison.

“In my conversations with CPW, we can expect hunters who had planned to hunt in those areas to migrate over for the over-the-counter elk tag opportunities to the west,” the White River National Forest’s Scott Fitzwilliams said. “How many and what the impacts will be are unknown.”

Outfitters with access to private ranches certainly are getting calls from hunters desperate to salvage their season.

“People are scrambling to make lemonade out of lemons … but we are a couple years out on our bookings, so unfortunately we can’t accommodate those guys,” said Dean Billington, who has run Bull Basin Guides and Outfitters out of Kremmling for 31 years. “These fires, they don’t know what’s public or what’s private and I’m sure a lot of private ranches have been affected by these massive fires, but in our little area, we have been able to dodge some bullets.”

MORE: Blazes in Colorado, California may be part of a climate-driven transformation of wildfires around the globe

Large fires are currently burning in Boulder, Larimer and Grand counties and together have scorched hundreds of thousands of acres.

The Cameron Peak fire, burning west of Fort Collins, is the largest recorded in Colorado history. The Cal-Wood fire, northwest of Boulder, has destroyed at least 20 homes and prompted thousands of people to be evacuated. The East Troublesome fire has torched more than 15,000 acres in Grand County and continues to be fueled by high winds.

All of Colorado is under drought status and scientists have pointed to the effects of climate change as one of the causes.